For a brief span in 1985, Chaosium dipped their toes into producing solo adventures for Call of Cthulhu, having previously made the SoloQuest range for RuneQuest. At the time, only two adventures were released before the company reconsidered and decided to get out of solo adventures altogether – a situation which would persist until the Kickstarter for 7th Edition Call of Cthulhu, in the wake of which the solo adventure Alone Against the Flames was devised. 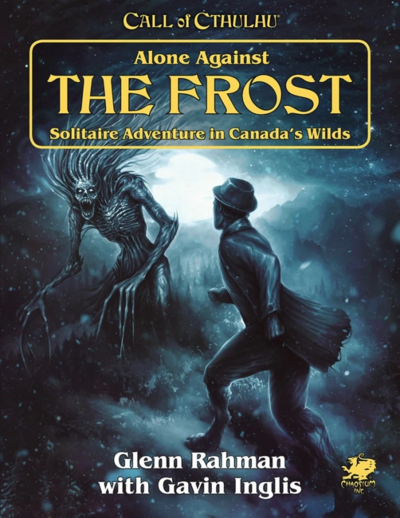 This seems to have done pretty well for itself, because the new regime at Chaosium have been putting it front and centre when it comes to introducing people to the game. For instance, in the tie-in mobile game, Alone Against the Flames is the first scenario you play, and the adventure is packaged with every copy of the Starter Set, where it serves as a gentle introduction to how the system works and what a Call of Cthulhu investigation is like.

In the wake of this, Chaosium have brought the two long-lost solo adventures back into print. First they did Alone Against the Dark, which I found to be somewhat overcomplex due to its ambition to replicate the action of a full-blown globe-trotting mega-campaign in a single solo adventure. Now Alone Against the Frost is an updated reprint of the original Alone Against the Wendigo – retitled because the Wendigo is only one thing you might encounter on your expedition into the mysterious North Hanninah region of Canada.

This manages to find a very different approach to handling multiple player characters in a solo adventure than Alone Against the Dark‘s. That adventure had you play various player characters in turn, with you moving on to the next one whenever your current character got killed, so it was essentially an “extra lives” mechanic. Alone Against the Frost, however, feels like you are leading an actual party of characters.

Your own character is Dr Nadelmann (gender your call), the academic who’s assembled this expedition; the other characters are your three graduate students and the local First Nations woman who has agreed to be your guide. (The text makes sure to have her specify that the people who live in the region are outcasts who are pariahs in the eyes of the surrounding tribes, a necessary clarification which avoids some racist implications.) Whether or not you can keep your guide onside is a significant question, and the adventure is cleverly set up such that once grad students start dropping, they always drop in the same order, which helps reduce the potential range of possibilities the adventure has to account for.

As far as the actual action of the adventure goes, it largely involves you bimbling around in this region running into trouble. Every so often you get the option to either turn back or press on. Press on too far and you may never come home, but turn back too early, before you’ve found a major discovery, and at the very least you risk your academic reputation – and if you’ve lost some expedition members along the way, you may find yourself in deeper trouble still. Getting a positive ending involves finding the astonishing secret of the region and then getting out alive and with suitable evidence of its existence.

Originally penned by Glenn Rahman, this new version of the adventure has been tuned up a bit by Gavin Inglis. Charlie the guide is now a woman, to allow for more representation, for instance, and the adventure has been adapted to 7th Edition rules. Perhaps the most interesting gem here is the little afterword from Glenn Rahman himself, who reminisces about how he and his late brother Philip had put out in Flying Buffalo’s Sorcerer’s Apprentice magazine what they believe to be the first rules for roleplaying in a Lovecraft-inspired scenario in the form of The Lovecraft Variant.

This apparently was an influence on the original Call of Cthulhu design, with Sandy Petersen calling out The Lovecraft Variant as an inspiration in his original designers’ notes as published in Different Worlds and Chaosium giving Glenn and Philip complimentary Call of Cthulhu product for the first few years of the line’s existence. In particular, Petersen acknowledged that the Rahman brothers had inspired the Sanity mechanic – which, interestingly, they’d called Emotional Stability in The Lovecraft Variant, which with the passage of time is perhaps a more apt term for the idea.

What is especially welcome in Rahman’s afterword, however, is the passing mention that Chaosium are planning to renew and revitalise their solo adventure line. One can only hope more Alone Against the (Thingy) books come down the pipeline.