Whilst the new edition of Call of Cthulhu has enjoyed some big, thick adventure releases – the Cyclopeanly chonky slipcase edition of Masks of Nyarlathotep perhaps being the most attention-grabbing example of this – the new regime at Chaosium do seem to understand that there’s also a place for slimmer, cheaper volumes of adventure material.

I’m going to cover two recent releases of products in just this category in this article, but before I go into it I do want to highlight one interesting thing: both the collections I am going to review include in their back cover blurb a statement that they can be played using either the rules in the Keeper Handbook (in other words, the full-fat 7th Edition Call of Cthulhu rules) or can be played with the information in the Call of Cthulhu Starter Set. 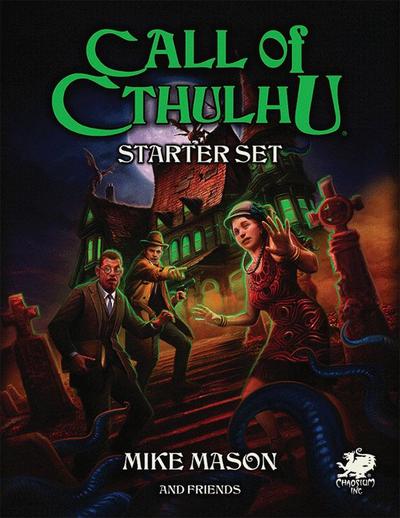 This is an excellent idea. Too many games don’t provide materials which can be used to continue playing with just their starter sets; in fact, the only game I can think of which has done this previously is Dungeons & Dragons, where in the late 1970s and early 1980s there was an entire run of adventures designed to be playable just with whichever Basic Set (Holmes, Moldvay, or Mentzer) was current. We’re not talking patronising shovelware either, here – revered modules like Keep On the Borderlands were part of that line.

This ended more or less as soon as TSR took the non-Advanced version of D&D off the market; subsequent starter set-type products were very much designed on a “learn the basics of play with this, then go get the full rules” basis, and most starter sets for other games seem to work in the same way, existing apparently to act as sales drivers just for the core books.

What Chaosium seem to have realised is that they put out adventure material which can be played with just the Starter Set and label it as such, then worst case scenario, they got a few more sales on an adventure product than they otherwise would. The best case scenario is that these products improve the rate at which the Starter Set turns interested beginners into regular Chaosium customers, and prompts them to graduate to acquiring the full rules later on.

How does that figure? Simple: rather than obnoxiously putting people in a position where they effectively have to either put the money down for the big fat rulebook or stop playing, Chaosium now give Starter Set users the option to continue playing a bit longer. Sure, there’s the risk some of them will use that as a reason to delay getting the core rules – but so long as those customers decide to get the core rules eventually, Chaosium will still get their money.

And in the meantime, something more important is happening: those beginners are spending more time with the game, and by spending more time with the game they will, hopefully more often than not, develop a deeper enjoyment of the game. The longer they knock around in the Starter Set powered antechamber to the full game line, the more likely it is that they’ll eventually cave and get the core rules.

And if they never do and just keep playing forever using the Starter Rules? Who cares? Again, worst case scenario is that there’s another Call of Cthulhu player or Keeper out there. They prefer the lighter rules – fine, great, they’re still an extra body in the community and contribute to keeping it healthy, and they’ll likely get along just fine in a game using the full rulebook in a player capacity anyway even if they find it too daunting to use the Keeper Handbook to run adventures themselves. And if there’s stuff for them to buy, a proportion of them will buy it.

In short, taking this approach is a very smart move on Chaosium’s part, especially when you consider the long view; it is good both for Chaosium from a growing-the-customer-base perspective, and for the community on a more-people-to-play-with basis. Everyone wins here. 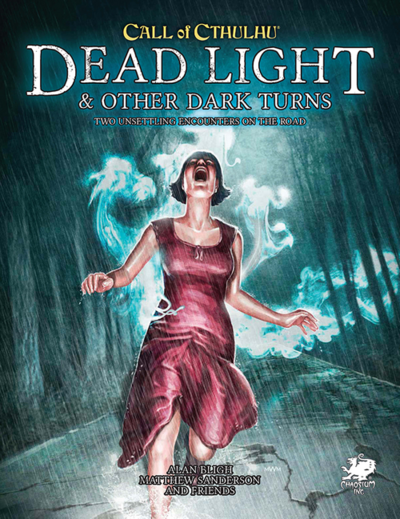 This is a brief collection of adventures in the default 1920s era, with a connecting theme of “unexpected encounters on the road”. It’s an apt concept – the 1920s mark a time when car travel was becoming increasingly common, but the infrastructure which drivers are able to rely on today for support was in its infancy. In particular, unlike in the modern day if the PCs’ car gets stuck somewhere they can’t just use their mobile to call their insurance company.

Dead Light itself was originally released by the old regime at Chaosium – I reviewed it in my Kickstopper article on the Call of Cthulhu 7th Edition Kickstarter, since the PDF was given away free to backers for that to tide us over during the delays. That version used the old editing and presentation standards of Chaosium which have fallen by the wayside under the new regime, in favour of an updated layout standard that looks less dated in the current market.

Dead Light & Other Dark Turns, then, is a product intended in part to replace the old edition of Dead Light, with additional material included to make it appealing to those who might own the old edition. The text itself of Dead Light is also revised and tidied up somewhat, with errata sorted (the most glaring example is that the old version of the scenario mentioned in passing an NPC who doesn’t exist because they were pulled from the adventure; this is now sorted out.

The other fully-developed scenario here is Saturnine Chalice, an adventure which kicks off with a classic “oh no, we ran out of gas, let’s see if the people in that lonely old mansion are able to help” premise. No, it doesn’t turn into The Rocky Horror Mythos Show – instead, the PCs end up in a terrifying situation whose underpinnings derive strong inspiration from ceremonial magic as it was actually practiced in the 1920s (and how some occultists attempt to practice it today, if they’re into a rather retro approach to the whole shebang).

Now, if you have players in your group whose personal spiritual beliefs include a belief in this sort of magic (or a strong objection to it), that may cause issues at your table; I suspect most people who sign up for a Call of Cthulhu game are going to be alright with using magical practices as a sort of horror, but I can imagine someone taking the stance of “I’m OK with Mythos-based magic being evil but please don’t demonise my actual beliefs”. It turns out the rituals here have gone awry for Reasons, which might satisfy that concern, though obviously that’s not going to be so apparent until you uncover that information.

Still, that’s going to be a pretty niche objection, and I suspect most people who’ve studied ceremonial magic will dig the authentic presentation here. The scenario is very effective at presenting enough context on the occult material utilised to help the referee understand its relevance and add depth to the situation, as well as finding ways to use it as the basis for puzzles. (On that point, it even explains how to run the scenario in a way which gives the players an opportunity to solve the puzzles themselves, and how to resolve them through skill rolls if that would bug your players.)

My sole criticism of the scenario is that it might be a little too oblique – it’s just too easy for players to get through it and not have any real inkling of what really happened. That said, it’s got a bunch of seeds to set up follow-up investigations, and I would actually be more confident using it as part of an ongoing campaign where you could spend later sessions exploring those leads, and through those means shed further light on the events of this initiating event. Taken as a one-shot, a lot of the higher-level aspects of the backstory simply wouldn’t be apparent to many play groups, but that isn’t a problem if those dangling mysteries are going to be explored further in later sessions.

Lastly, the book offers a collection of briefer adventure seeds spun out of incidents on the road, to further illustrate the possibilities of this sort of format. This feels like it’s just filling out page count to a certain extent, since it doesn’t offer all that much which you couldn’t brainstorm at home, but it’s nice to have. 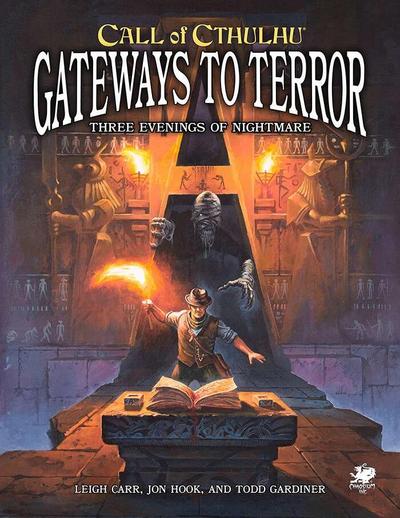 Whereas Dead Light & Other Dark Turns presents fully-developed scenarios in a broadly traditional format, Gateways To Terror offers an interesting selection of mini-scenarios which pioneer a somewhat different presentation. The investigations collected therein were all cooked up originally to act as demonstration games for Chaosium to use at conventions, with the intention of being able to hand people pre-generated characters, present them with a situation, and get right to the core of gameplay – a bit of investigation, a bit of Sanity-blasting horror – and wrap up in the space of an hour. (Suggestions for how long each segment of play should last, give or take, are even included as the introduction to each scenario.)

This is a setup which is useful for beginners, or for if you’re an old hand who has an urge to play some Call of Cthulhu but there isn’t time for a full session right now. (Perhaps a session of a different RPG just collapsed suddenly for whatever reason, and your group wants to salvage the evening and get some roleplaying in during the remaining time.) Alternately, the situations presented here can be elaborated upon significantly, or used as encounters to drop into larger scenarios.

It’s a thin book, with only three such scenarios presented, though I feel like that’s about all you need before this particular format gets repetitive; due to these being used as demonstration games, I get the impression that there was a particular checklist of criteria which all the adventures had to check off, which makes sense if you want to give people a rounded idea of what the game is like but also leads to a certain sameiness.

In the introduction to the book there’s also a set of suggestions to help people explain the game system to new players without overwhelming them – covering the sort of details you should detail to them and in what approximate order, and how you should introduce things like combat or Sanity as and when they become relevant. It’s all quite sensible advice, but useful to have and could be extremely handy for new referees trying to persuade friends to give the game a try.

I get the impression that it may have been developed from a worksheet originally developed for demonstrators to use in a convention context, so its recycling here makes perfect sense. Gateways To Terror is a nice example of the new regime at Chaosium working smarter, not harder – realising that this material they had developed internally could have a certain commercial potential and acting to realise that whilst doing what they could to make it a useful product that gives proper value to those who obtain it. If you are in the business of introducing Call of Cthulhu to new players, I would say that Gateways To Terror is one of the better tools you can have in conjunction with the Starter Set.