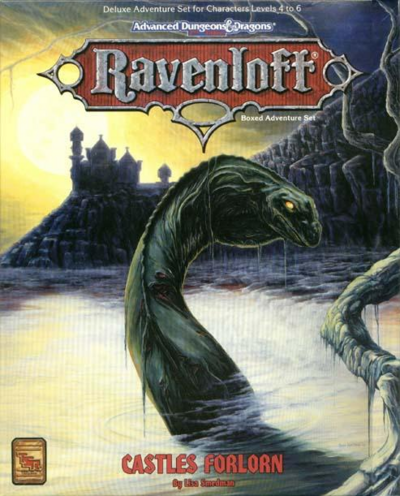 The story in question is the brainchild of Lisa Smedman, the module’s sole named designer – she even gets a cover credit. Smedman had contributed a bit to Dragon magazine previously, but so far as I can tell Castles Forlorn was her first solo design; it rather says something about how much content TSR was pumping out at the time that they’d give a comparatively untested designer a boxed set product to produce, and it says a lot about Smedman’s talents that Forlorn is as good as it is. (It seems like TSR also had a lot of confidence in Smedman’s Ravenloft material, tasking her with producing significant adventures for the game line such as the Demiplane-shaking Grim Harvest trilogy.)

Smedman’s career has seen her make a gear change from game designer to author over the years, and she’s not the first person to have charted that course. RPG designers who are actually budding authors can be prone to significant missteps, of course; how many annoying railroads have we seen published where, reading through them, we’ve started to suspect that this is just a frustrated novelist’s story outline which, having failed to sell it as a conventional story, they’ve tried to repackage as gaming material? Smedman, at least here, avoids this pitfall adroitly; a DM since the 1980s, Smedman clearly understands D&D and produces a module here which plays to the game’s strengths.

In particular, Forlorn offers what is essentially a Ravenloft take on a wilderness adventure – a staple of D&D since its earliest days on the one hand, and therefore something the system supports fairly well, but at the same time an adventure type where it isn’t immediately obvious how you apply it to Ravenloft. Smedman solves the problem by making the wasteland of Forlorn a place specifically blighted by the actions of its dread lord, from the castle (the wastleland’s major “dungeon”-like environment) at its centre to the transformation of the majority of its inhabitants into wicked goblyns to the culling of its forests to the lone source of potential aid in the realm – the druids whose little settlements represent the major resistance to the powers ruling Forlorn and whose history is intertwined with them.

As an aside, Smedman makes really good use of the druids here. We don’t learn much about whatever world it was that Forlorn was taken from, but evidently the Celtic pantheon held sway there, and Smedman makes good use of the rendition of it as presented in Legends & Lore – a decision which instantly lends extra depth to the druid religion beyond the vague “nature and shit” treatment we see in the AD&D core books.

On top of that, Smedman manages to handle the whole “True Neutral” thing as interestingly as I’ve seen anyone manage to do this. She recognises that the druidic desire to seek balance would naturally be expected to nudge them in the direction of being comparatively benign figures in the Demiplane of Dread, since the entire place is so saturated in evil the druids would tend to push against that. At the same time, though, she remembers that many druids are not good, but neutral – which means that whilst they may be seeking to oppose the evil of the land, they aren’t necessarily going to use methods which are especially goody-two-shoes, and they may well be more prone than more heroically-aligned sorts to be affected by the temptations and illusions of the Demiplane.

As well as taking the premises of AD&D and Ravenloft and making the best she can of them, Smedman also shows she can put together a hell of a gothic plotline, with the history of Forlorn being just as classic a tragedy as, say, that of Barovia. Yes, it does include the sometimes unfortunate Ravenloft tradition of mashing together two monster types – one character of vital significance is a ghost by nighttime and a vampyre by day, reliving their agonising death daily at sunset and returning to life at dawn.

(Note that in Ravenloft vampyres are non-undead blood-drinkers, as distinct from vampires. Between this and the goblyns who are distinct from goblins, I really think that the Ravenloft designers could have done with a thesaurus.)

This is slightly cheesy, but Smedman does her utmost to give some justification for this: the vampyre nature of the character in question is key to the circumstances which led to their original deaths, and the concept of a character who by day can conceal their monstrous nature (but retains a predatory side which never goes away) but who cannot hide from the consequences of their past deeds when night falls is rather fun.

Smedman even does quite well with the time travel angle here, explaining clearly how the maps and room descriptions for the castle depict the different time periods, how time shifts are accomplished, and providing ground rules on how the time travel works for the purpose of the adventure which are both consistent with the underlying ideas of the module and viable for referees to actually implement in a game.

In terms of the structure of the product, in its original release the boxed set included the usual maps and poster art, plus three booklets – a 96 page guide to the region, The Weeping Land, and two books of small adventures and encounter concepts, Melancholy Meetings detailing incidents in the wilderness and Eve of Sorrows detailing encounters in the castle itself. By and large this works quite well, though it’s not perfect.

Specifically, The Weeping Land includes the room descriptions for the castle, but it’s a little inconsistent about making sure it includes references to Eve of Sorrows whenever a location is tied to something in there. As a referee running the game I’d ideally want to have some sort of reference sheet cross-referencing the room entries in The Weeping Land with the incidents, items, and NPCs listed in Eve of Sorrows; my ideal revision of the product would include worksheets to aid this process (and to keep track of cross-time mayhem caused by player action).

Still, the material here is eminently usable in any Ravenloft game or any horror-themed D&D game. In particular, the region described neighbours Barovia, making jaunts into Forlorn and investigations of its dark history an interesting potential side quest for any party building towards or currently playing the original Ravenloft module or its later revisions (such as House of Strahd for the 2nd edition line or, more recently, Curse of Strahd for 5E).

One last point: as I said, this was a boxed set in its original format. Since then, of course, TSR has gone bust, and in picking up the pieces after them Wizards of the Coast have been reluctant to support too many campaign settings at once and incredibly careful about what boxed sets they put out for D&D, and the common wisdom has been that TSR’s strategy of flooding the market ended up biting them in the ass (and was largely only possible due to the success of their novel lines – a significant spike in returns of which ended up being the last straw for their finances).

However, after a spell when their attitude to PDF sales more or less guaranteed mass piracy of the extensive D&D back catalogue, Wizards of the Coast have come to their senses and put much of the official material from previous editions up on DriveThruRPG. Not only is Castles Forlorn one of these, but it’s also one of the products which they make available in print-on-demand form – produced from as nice a scan of the original product as they can muster, with the three booklets and the maps compiled into a single softback book.

That’s the version I own, and it’s not half bad. Yes, you can tell it’s a scan if you compare the colour scheme to that of other Ravenloft boxed sets of a similar vintage, but it’s still a pretty good one. Yes, the maps are scaled down a bit, but they’re perfectly clear to my eyes (though you’ll likely want to download the high-resolution scans of the maps too, which is a reason to get the PDF plus print-on-demand package rather than just going for print-on-demand). On the whole, it’s a nicely presented little supplement.

This is both a credit to DriveThru’s print-on-demand process (or at least that of whichever printing partner produced by copy) and whoever it was at Wizards who prepared the materials for this, and also kind of makes TSR’s lust for boxed sets look a little bad in retrospect. Sure, there was a strategic benefit to cranking out all of that boxed material – it took up more shelf space, any self-respecting RPG shop would want to stock the whole TSR range, taking up more space meant squeezing out more competitors.

Nonetheless, the boxes were also more dear for customers than a simple book was – and it’s pretty clear from the book version produced for print-on-demand that Castles Forlorn could have worked just as well as a single book as a boxed set. As nice as it is that TSR gave a woman a boxed set for her first solo credit, the value of this is diminished somewhat by the way TSR cranked these boxed sets out – and the price for what is essentially a rather involved adventure module meant that many customers at the time would have passed on the product and therefore missed out on Smedman’s obvious talents.