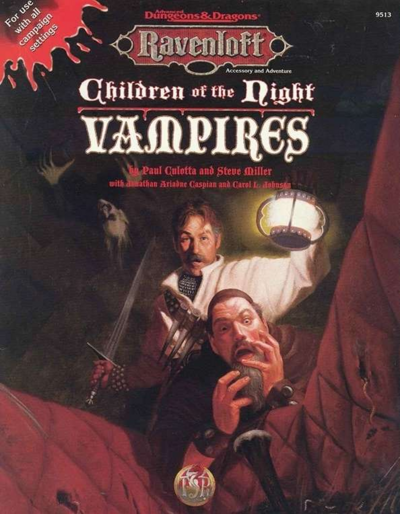 In this case, we’re dealing with a collection of vampires, and whilst the variety presented is impressive I’m not wholly convinced they stick the landing. The backgrounds as presented need a little work and perhaps some tuning up to make them a bit less silly at points. For instance, there’s one vampire in here who in some respects is a really interesting addition to the setting – a relative of Strahd himself, having survived his bloody rise to power as a vampire herself and intent on deposing him, who could therefore act as either a highly dubious patron or a secondary antagonist to player characters working towards the same end.

Unfortunately, there’s aspects of her history which are just plain goofy. For instance, she knows enough necromantic lore to know that vampires get more powerful as they age, and that ghost attacks cause you to age 10 years each time – so she deliberately sought out and annoyed ghosts so they’d attack her. The age inflicted on her by the attacks caused her to shoot up in power with no detriments or even visible decrepitude.

This a classic example of taking rules intended to model a hostile monster attacking PCs (none of whom are assumed to be undead) using creepy, supernatural means which drain the life out of them and leave them prematurely age and treating them like they’re laws of physics. It also relies on the assumption that the age of a vampire relevant to determining its powers is based on the physical aging which the vampire experiences, rather than the accumulated lived (er, “unlived”) experience of the vampire in question, which I consider to be a highly questionable assumption. (It further assumes that ghosts will bother to continue attacking a vampire once it becomes apparent that their attacks are ineffectual.)

It is, in short, the sort of move you expect of a player character taking advantage of a rules exploit in a game with a referee who allows themselves to be persuaded to accept an interpretation of the rules which doesn’t respect the facts as they exist in the fiction. It’s literally something you’d expect to happen in Knights of the Dinner Table if one of the players there had their Hackmaster character get vampire’d.

Even if you buy into the idea of treating the rules like laws of physics in this manner and accept the underlying assumptions, it’s also not even an accurate reading of the rules. It is well-established even by 2nd Edition that the undead are that way because they have a connection to the Negative Energy Plane, which explains why healing spells hurt them – conventional healing constitutes a channelling of energy from the Positive Energy Plane, which does harm to the undead. It seems not unreasonable to infer from that that the aging effect of a ghost’s attacks are the result of a similar channelling of energy – so it shouldn’t have the same effect on vampires as it does on the living, and the “aging 10 years” effect on the living should really be seen as decrepitude arising from exposure to Negative Energy which can best be interpreted and modelled along the lines of the effects of the aging process, rather than literally dumping 10 years of life experience on them in a moment.

The basic idea here of a vampire who realises that some of their kind are stronger than others and then seeks means of gaining that power ahead of schedule is sound, mind, and indeed could provide fodder for an interesting adventure concept. One could imagine a player character party being hired to track down some rare magic item which, if they study it, turns out to do nothing for the living – but has the effect of allowing a vampire in possession of the time to act as a vampire of a higher age category. But the whole “track down a ghost and bully it to make it zap you with aging attacks” is just daft. Like I said: the material here needed another editing pass. Effective referees will be able to take the ideas presented here and tune them up acceptably enough; the question is, why should they have to?