Mansions of Madness is a collection of Call of Cthulhu scenarios put out by Chaosium in 1990 (a reprint over a decade later would tack on an extra scenario), based around the loose common theme of having a significant building (if not several) at the hub of the investigation. Though fairly elderly by the standards of the game line’s entire lifetime – Call of Cthulhu was a mere 9 years old when the book came out, the game is now some 38 years old – it’s still widely recommended to this day, with players and Keepers still finding much to enjoy in it. 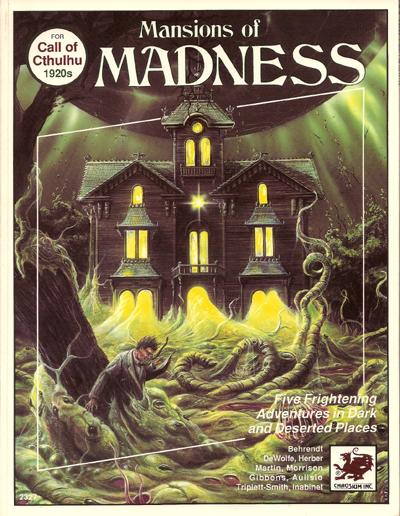 Indeed, I’ve played through some of the scenarios in it myself in the past, enough that I think it’s safe enough for me to look at it for myself to see if it’s worth the hype. I liked the parts of it I’ve played through, but was it merely down to the unquestionable talents of the Keepers involved?

The first scenario, whose title is a spoiler so I won’t mention it here, deliberately presents a situation which, unless the players really misplay their hand, won’t pose the PCs with too much physical danger, but forces them to consider the social implications of their investigation. The premise has the PCs realising that one of their neighbours – a perfectly respectable businessman in an respectable part of town – is up to something dodgy.

The scenario urges referees and players alike to keep in mind the wider context here; this is someone the PCs know, and a part of the wider community at that, whose mysterious disappearance will be noted (and if the PCs go in guns blazing or arrange for the individuals’ house to mysteriously explode, that will get lots of attention).

A particularly apt question posed by scenario author Michael DeWolfe is whether the PCs’ strategies change when their target happens to be a socially well-connected person who they personally know – it’s a good question specifically because any answer says something interesting about the PCs. If there’s no difference, that suggests a coldness to them – that the struggle against the Mythos has become such a priority to them that personal and social considerations don’t factor into it, which isn’t necessarily a good thing. If there is a difference to the way they’ve handled these situations before, do the events of the adventure prompt them to change their approach in future, or do they apply one rule to those they see as their social peers and another rule to strangers?

The second scenario is entitled The Plantation and, as the title implies, has action centring on a Southern plantation. The 1920s were the height of the “sharecropper” era, a time when Jim Crow was in full effect and had, along with other efforts, gone a long way towards reasserting the racial order of the antebellum South, short of relegalising slavery altogether.

To its credit, the scenario doesn’t flinch away from this fact; the downside is that it still relies on a lot of tropes from extremely racially-charged horror fiction in its depiction of this. Obeah is at least called “Obeah” and not “voodoo”, but zombies and other similar hallmarks of white Hollywood’s demonisation of voodoo are well and truly present here, the local black Christian preacher is literally a saviour “magical negro” type of the sort that’s become increasingly dodgy over the years, and a white man’s relationship with a black woman becomes a means for her and her evil Mythos patron to exert power over the white man.

In short, it’s a very 1990 treatment of this sort of subject matter: knowledgeable enough to say “By the way, this was an era of enormous racial injustice”, but foolishly regurgitating racist tropes anyway, as though that’s OK so long as you occasionally stop to remind everyone that this whole situation is, well, kind of racist. Perhaps if Chaosium plan on reprinting this collection for 7th Edition at some point, they should get a designer with suitable credentials to do a revision job on it, just as they called on Chris Spivey of Harlem Unbound fame to revise the Harlem-based adventure Dead Man Stomp for the 7th Edition Starter Set. As it stands, it needs a lot of work to better avoid implications which I am sure that designer Wesley Martin didn’t intend, but still didn’t exert enough caution to avoid.

The Crack’d and Crook’d Manse is a short scenario originally designed for a 1984 convention, so perhaps in that sense some of its missteps are the result of it being a very early Call of Cthulhu adventure from before principles of good scenario design were better understood. It’s a bit of an annoying “gotcha” adventure where the main threat to the PCs turns out to have little to do with the earlier history of the house in question, with the result that PCs who do the right thing and research the background of the place end up lumbering themselves with red herrings.

As if punishing players for effective play weren’t bad enough, the scenario also verges on telling the referee to lie to the players; for instance, it directly prompts the referee to tell the players that they have an odd feeling about a shed in the garden. There is absolutely nothing special about the shed. If you feel you must, in a scenario, prompt the players to waste their time and yours in a minute examination of an irrelevant detail, that’s one thing – I don’t know why you would want to do that, but you can do it by describing a load of details about the shed which prompt the players to come to the conclusion themselves that they have an odd feeling about the place. Directly telling the players what they feel about something, however, feels deceptive, largely because it’s usually reserved in the system for stuff which is genuinely traumatic (through the medium of SAN rolls). In general, I would say that in Call of Cthulhu that unless some incident occurs which merits a SAN roll, best practice is to never tell the players what their characters “feel” because that’s a roleplaying choice that the players make themselves, and the SAN system is the specific mechanic provided in the game to overrule that where necessary.

That said, others who have run the adventure (admittedly whilst not rolling out some of the red herrings) have expressed the view that the red herrings don’t matter so much, because the scenario at least signals to attentive players the big bad’s main weakness, so regardless of the nature of what it actually is, you at least have a fair chance of having the means of disposing of it available.

The Sanitarium seems to me to be a pretty good scenario concept. It has some somewhat out of date treatments of mental illness, though given that it’s a period piece it’s fair enough for the sanitarium patient’s diagnoses to be somewhat old-fashioned provided that they are roleplayed with sympathy by the referee. As the title implies, it’s about spooky goings-on at an isolated mental hospital, but what I think is the scenario’s cleverest feature is the way that the player characters end up stuck at the sanitarium and the island it’s on for a number of days, without any staff or other authority figures present, obliging the PCs to decide how they’re going to handle the situation and make sure everyone’s looked after until help comes.

The last scenario, Mansion of Madness, is frankly rather misnamed; there’s multiple abodes of various levels of disturbingness in the scenario, and depending on how your players tackle the investigation one or another of them might be significantly more dangerous than the other, or they might be equally terrifying. It’s an interestingly structured scenario in which the PCs stumble across a situation not prior to a major disaster, as is often the case in Call of Cthulhu investigations, but after that disaster has largely taken place, and various different factions are squabbling over the consequences.

On the whole, the collection offers up three scenarios which seem pretty decent straight off the page, plus another I have reservations about but which others have had decent experiences with, plus one where I feel like I’d want to do a lot of work on it and a lot of research before running it. In short, it’s substantially more hit than miss, and is a decent sample of how good Chaosium’s output got after nearly a decade of supporting Call of Cthulhu.