Authentic Thaumaturgy by Isaac Bonewits is a system-agnostic RPG supplement with a long heritage; its original edition came out in the 1970s from Chaosium, whilst Steve Jackson Games put out an extensively revised version in 1998. Though it’s available in an e-book edition from Steve Jackson Games’ e23 storefront, I wouldn’t hold my breath for a reprint: not only did Bonewits die in 2010, but in 2018 Moira Greyland, daughter of Marion Zimmer Bradley, implicated Bonewits as having a peripheral role in the abuse that she suffered at Bradley’s hands. 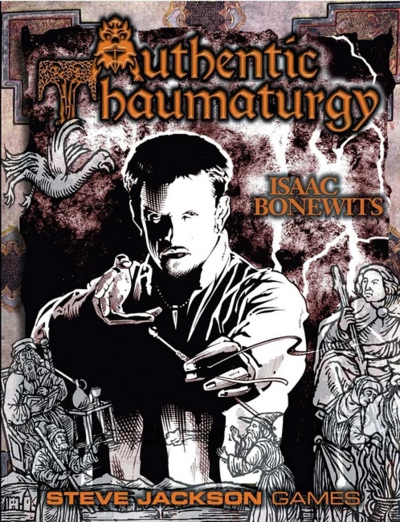 Either edition purports to offer more or less the same thing: an analysis of tabletop RPG magic, a discussion of what real-world magical practitioners believe and do, and a proposal for a magic system based on real-world practices and the sort of effects people claim to get out of them. The whole thing is written from the perspective that the point of an RPG is to be a realistic simulation, and therefore Bonewits has little time for magic systems which don’t resemble real-life magical practices, even though such systems might be more suitable for, say, presenting a challenging and exciting game, or for providing an interesting feature or metaphor in a story. I, a highly trained scientist, can enjoy science fiction stories can be enjoyed even when the science involved has been discredited or was never that realistic to begin with: why can’t Bonewits do the same for fantasy stories whose treatment of magic doesn’t match his worldview?

And the thing is, that worldview is decidedly central to the book, and it’s rooted in the late-1960s/early 1970s neopagan scene that Bonewits emerged in. The thing is that Bonewits clearly has a highly developed personal ideology of what magic is and isn’t and how it works, and he seems to be personally offended by different ideas in the field.

This isn’t just an annoyance at people expressing a general disbelief in magic – though he’s certainly very annoyed by games which say “It’s like our world at a particular time period, except magic exists”, because he believes that magic exists anyway and everyone should accept that. Nor is it merely animosity towards science, though you’ll find plenty of that here – Bonewits showing no understanding that modern science is a methodology for establishing consistently reliable truths and that, historically speaking, there wasn’t a fine distinction between the occult arts and natural philosophy; much of what is now regarded as magic largely consists of the bits of natural philosophy which science couldn’t demonstrate as being true. Anyone with an agenda to set up magic and science as being somehow enemies of each other when they are different methodologies for different purposes needs to explain why it is that Isaac Newton could promulgate his rigorously scientific view of the universe with one hand and seek the philosopher’s stone with the other.

No, see, Bonewits also strongly pushes his own point of view of what magic is and how it works, which won’t necessarily be compatible with other magical practitioners’ worldviews and systems. Bonewits tends to slam occultists who define magic as being mostly about personal spiritual and psychological advancement and discipline, which immediately puts him at odds with Western ceremonial magicians, Golden Dawn practitioners, Thelemites, and a general cross-section of practitioners of mysticism from a range of worldwide cultures. Similarly, he insists that every spiritual entity anyone has ever claimed to encounter is real on some level, which is sweet and lovely in a rather noncommittal 1960s way but upends the magical cosmologies and systems of practitioners who, say, don’t believe in fairies, or demons, or even don’t believe in exterior deities at all. He writes off “psionics” as a world people use for magic when they don’t want to call it magic, which isn’t exactly helpful if you want to explore more science-flavoured powers of the will.

There’s probably at least as many definitions of what magic “really” is as there are real life practitioners – hell, chances are there’s more, because practitioners aren’t necessarily especially consistent on this point – but Bonewits is only interested in the set which are compatible with his own. He even goes so far as to argue that, thanks to the advance of science and technology allowing a command over nature which is much more reliable than old-fashioned methods of spellcasting (he’s very keen on the idea of magic as something you do for practical results), occultists had the “luxury” of being able to devise what Bonewits astonishingly calls “non-working systems of magic”.

The very notion of “non-working systems of magic” suggests an objectivity to the field that simply doesn’t exist. Any system of magic which could be shown to consistently work wouldn’t be magic any more – it’d be science – and Bonewits has no standing to say that his magic is real whilst the magic of those whose systems he disapproves of isn’t real. As a neopagan who puts a strong emphasis on ancient wisdom, Bonewits seems to want to put across the idea that long-standing traditional systems of magic are more valid than newly-devised ones, but at the same time he makes the odd Robert Anton Wilson reference which suggests that he’s at least passingly familiar with some of the basic precepts of Chaos Magic, even though he doesn’t go into detail about it here, despite it being the most significant development in “real world” magic since the original Authentic Thaumaturgy edition was put out by Chaosium and despite it being thematically highly suited to modern-day occult mystery/horror RPGs such as the World of Darkness material or Unknown Armies.

Ultimately, most occult systems seem to work in part by convincing their practitioners that where they get the result they wanted, that’s because the magic worked, whereas where they don’t get the results they want it’s because they didn’t do it right. The idea of a “non-working” system suggests that there’s versions of magical practice which will give results more consistently than other versions – but that in turn implies that we can study the differences between those versions and thereby empirically work out the One True Optimal System, which seems to be something Bonewits actively doesn’t believe in.

In short, Authentic Thaumaturgy documents nothing less than authentic incoherence, showcasing Bonewits’ rhetorical style in which saying something emphatically and with a lot of conviction behind it substitutes for actually backing up your arguments. (Call it magic or call it psychology, but this sort of “faking it until you make it” can have some pretty major results.) It is likely to please only those who are previously inclined to buy into Bonewits’ particular worldview; if your view of the world is essentially secular, materialistic, atheistic, monotheistic, or a different flavour of polytheistic/magical thinking than Bonewits espouses, it’ll bug the shit out of you. And in terms of producing interesting gameplay or enthralling narratives, the system provided here isn’t all that useful.

Ultimately, the Authentic Thaumaturgy system can only really be said to simulate Bonewits’ own magical system. A paranoid mind might wonder whether this is intentional – whether Bonewits believed, correctly or otherwise, that getting a bunch of gamers to buy into his system, at least for the purposes of gaming, would invest it with magical power. Either way, writing the system as a Bonewits Simulator feels like a somewhat egotistical act, especially since Bonewits is clearly aware that there’s occultists out there who don’t agree with his take on magic but is unwilling to lend any credence to theirs. For someone who often claimed to want to move away from monotheistic One True Way-ism, Bonewits is very quick to declare himself an expert and authority on subject matter which has traditionally admitted to no such authority.