Cthulhu in R’lyeh eternally lies
Somewhere in the depths of the sea
But soon, says the cultist
“Iä! Iä!
Tomorrow Belongs To Thee!”

So, Chaosium has turned its attention to Weimar-era Berlin in Berlin: The Wicked City, a 7th edition supplement primarily written as a passion project by David Larkins (with assistance from product line gurus Mike Mason and Lynne Hardy). This is a chunky supplement which provides a rich level of detail on Berlin as it existed in the span shortly after World War I – in which street violence and radical politics rubbed shoulders with a rich nightlife that included unprecedented freedom to explore drugs, sexuality, gender, and identity – to the period just before the Nazi takeover, at which point street violence and radical politics rather rubbed out said nightlife, save for those sections saved by NSDAP patronage. 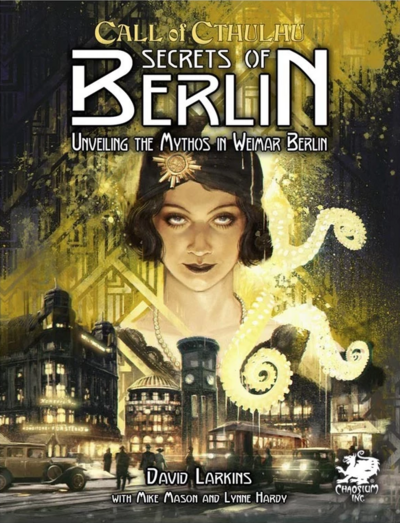 Despite my little filk above, however, this isn’t just H.P. Lovecraft’s Cabaret – though there’s inevitably a major overlap of themes. Yes, the bars and cabarets and theatres of Weimar-era Berlin do get a close examination – as does the underworld of drugs and the unprecedented freedoms enjoyed by the LGBT+ community at the time, though in the latter case the text does offer sufficient depth to note that the community wasn’t a monolith; there, as in so many areas of German life, an extreme fringe of proto-fascists existed, and the community had a social pecking order in which crossdressers and those cultivating an androgynous presentation tended to be looked down on a little by everyone else.

At the same time, the city’s politics, criminal underworld, and geography all get a comprehensive coverage here. Although it would be very hard to run a game in this setting where the shadow of the Nazis was altogether invisible, it’s clear from the book that the politics of Germany at the time and Berlin in particular were more complex than is often remembered; parties from across the political spectrum had their paramilitary forces (even the centrists had people ready to get out there and break some legs in the name of moderation!), the far right was home to a bewildering variety of small factions, and the NSDAP was officially banned for a chunk of years in the middle of the timespan covered by the supplement. It helps, perhaps, that Berlin wasn’t as keen on the Nazis as the rest of Germany, with the party consistently polling poorly there until they abolished elections entirely; Goebbels called it “the reddest city in Europe after Moscow”.

Overall, Chaosium seem to have decided to grasp the nettle on this one and declare this a supplement specifically for mature gamers, and naturally the themes in the book won’t be for everyone. For some gaming tables it’ll be too rich altogether; others might find the themes here extremely interesting to explore, and still others will seek to pick and choose. The supplement largely errs on the side of being suggestive without being explicit; opportunities to dive into the highly sexualised, drug-fuelled life of the city exist, it’s down to your gaming table how overtly you depict that.

After providing the rundown of the city itself, the supplement provides a clutch of ideas for Mythos threats to be found, and then three rather expansive investigations. The prewritten investigations here are actually pretty good; Larkins seems to have this tendency to end his scenarios with a really flashy confrontation which PCs will have difficulty avoiding, but at the same time this ends up feeling less railroady than it might; in particular, the outcome of these confrontations is often wide open, and seems like it will hinge a lot on what the PCs have been able to discover during their investigations, both in terms of methods to counteract the evil they face and in terms of simply understanding what is going on to begin with. A group which has done well at the investigation can put themselves in good stead to survive the climax; a group which has done poorly, or has entirely misinterpreted the situation, may end up making bad choices. This is an investigation design ethos I rather appreciate, because it means missed clues don’t cause the investigation to stall – they just make a bad ending more likely.

On the whole, Berlin: The Wicked City sets a new bar in terms of the content which Chaosium is willing to handle in Call of Cthulhu supplements, and manages to combine handling it with suitable care (and giving sufficient guidance to groups as to how they deploy that content) without diluting it at all – brilliantly contradicting the fears and concerns of those who are ideologically opposed to taking this sort of care in making sure the participants in your horror game are scared in the fun, enjoyable way they consented to, rather than being traumatised in a way they didn’t buy into.