Chuck Tingle is probably our greatest living satirist, his primary platform being the titles, blurbs, and absurdly photoshopped covers of his short stories (“Tinglers”) on Amazon. Oh, sure, there’s the content of those stories too – but I would be willing to bet that Chuck works on the basis that 99% of people wouldn’t actually sit down and read any of his erotica about urbane dinosaurs, friendly living objects, manifested abstract concepts, or sexy unicorns and bigfoots; the joke has to be delivered in the title and blurb, ideally just the title, and then the actual action of the story is fairly self-evident from there.

Nonetheless, for what’s basically a long-running repetition, refinement of, and iteration on the same basic joke, the whole Tingler thing seems to be going from strength to strength. It certainly help that Chuck – despite portraying himself as a somewhat naïve figure on his Twitter feed and reliant on his “son name of Jon” to get by – actually seems to be remarkably savvy. When the Rabid Puppies’ block voting attack on the Hugo Awards was at its peak, they got Tingle’s Space Raptor Butt Invasion nominated in the short story category. Whilst this seems to have been intended both to denigrate Chuck and the Awards by making them look silly, Chuck took things in hand, turning the incident into an opportunity to advocate for more or less all the causes which the Puppies disliked. (The peak of his counter-trolling came when he declared that if he won, he’d have primary GamerGate target Zoë Quinn collect the award on his behalf.)

That’s the thing about Chuck – he’s got this magic touch which has taken his long-running joke about getting pounded in the butt by sexy night buses or billionaire dinosaurs or alluring manifestations of abstract concepts or your own butt and made it strangely wholesome for work that still retains one foot in the world of erotica. His Twitter feed is a mashup of his surreal take on the universe and moments of clearly expressed, unequivocal good lessons about self-acceptance and treating each other right. He’s like the Mr. Rogers of Dadaist literary pornography who just wants to prove that love is real. 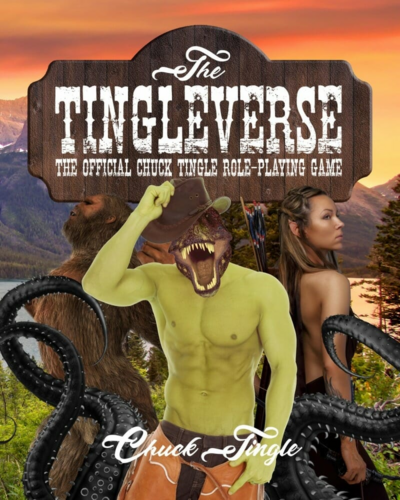 Now the long-running Tingle joke has taken on yet another dimension – that of a tabletop roleplaying game, The Tingleverse, named after the multiverse which his stories take place in. The concept of the game has players taking on the role of inhabitants of this universe – Humans, Unicorns, Bigfoots and Raptors are viable PC races in the core book, and you get to choose from classes like “Sneak”, “Wizard”, “True Buckaroo”, and “Bad Boy” (Chuck notes that being a bad boy doesn’t limit your choice of gender in any respect). Beginning your adventure in Billings, Montana, Chuck’s hometown that prominently features in all his stories, you’re encouraged to go forth and do good in the world against the encroaching forces of the Void, as represented by evil Void Crabs, dubious Reverse Twins, and the vile force of darkness and destruction known only as… Ted Cobbler, who anyone who’s not sufficiently high level just perceives as a perfectly normal resident of the neighborhood.

In setting terms The Tingleverse is pure Tingle – Ted Cobbler is a menace, the Billings Public Library is an important location in people’s lives, chocolate milk is powerful stuff and has the same effect as alcohol (and takes the place of potions), love is real and so on and so forth. There’s surprisingly little in the way of overt sexuality in the game, I suspect because Chuck trusts players to insert that (hurr) themselves. Perhaps the most startling aspect of the setting is the cosmology around the lonesome train that ferries you out of the timeline once you die. Characters don’t automatically die in The Tingleverse – instead they are sent to their own personal isolated station to wait to board the lonesome train once it arrives. They can be resurrected from there, potentially – but once they get on the lonesome train, they can’t be brought back. Between this and the extensive monster section (including foes like the Manifested Concept of Rage and Vampire Night Buses), there’s a lot of concepts here which are familiar to followers of Tingle’s fiction or the metafiction he perpetuates on his Twitter account.

In terms of system, it’s very obviously an old edition of D&D with the serial numbers filed off and Tingle-specific flavour layered onto it, in a “this is the only way I know how to design an RPG” sort of a way. There’s little sign that Chuck has fully embraced the OSR, and in general it has the air of something of a fantasy heartbreaker – no, hang on, it’s Chuck Tingle, make that a fantasy buttpounder. In keeping with such things, there’s only fairly simple art (reminiscent of Chuck’s occasional sketches he puts on his Twitter) and no fancy layout for that “This is just a straight printout of a Word document” aesthetic.

In terms of which flavour of D&D you’re looking at, I’d say it’s closest to B/X D&D in terms of complexity and approach. Variable hit point totals and damage from weapons is in, as are experience tables unique to each class and a very OD&D-like reservation of attribute-based bonuses only to especially high attributes. Attribute generation is by 4D6, drop lowest, arrange as desired, and noncombat resolution is encouraged to be resolved by an ability check against your attributes rather than going into any sort of in-depth skill system for non-combat activities.

Probably the most complex aspect of the system is armour and defence scores and attack rolls and the like, with numbers seeming to have positive or negative scores at random and the explanation of how to calculate your attack roll result being needlessly convoluted, which I think is Tingle’s gentle satire of the whole THAC0/Ascending AC/Descending AC controversy. I’m fairly sure there’s a bunch of errors in there, some of them deliberate. For instance, your defence rating seems to go up as you get higher in level, which seems on the face of it to be wrong (the explanation of it says that low scores are good), and Ted Cobbler’s attack stat and defence stats of -15 and 15 seem to have been swapped around.

That said, Tingle does has some interesting ideas. Characters in The Tingleverse get a bit more definition from their Unique Ways; these are much like Feats in Wizards-era D&D, in terms of being system-based things you can pick to get situational bonuses, but they often also have behavioural constraints tied to them which you have to roleplay – or, if you tire of them, you can opt to discard the Unique Way in question, freeing you of its constraints but losing its bonuses.

Another innovation is the fact that every class gets some sort of spellcasting ability, with all classes having a class-specific list of spells, or Cool Moves as they are called. This is essentially an application of the 4E idea of giving every class a set of powers and associated power economy (as opposed to rigorously refusing to give martial classes anything cool) to old school Vancian spellcasting, and a good chunk of the book is dedicated to providing players with wild and wonderful powers through this means.

In other respects the game is notable less for its system or for its setting, but for the unique voice of Dr. Chuck Tingle that resonates through it. For instance, in the discussion of alignment (the classic lawful/chaotic good/neutral breakdown), Tingle offers a definition of good which manages to be both simple and yet at the same time profound, and there’s little features here and there which back up Tingle’s essentially positive view of the world, like how True Buckaroos are forbidden from direct participation in combat but must instead support their friends, a concept which may be challenging (or annoying) to play but which is true to Tingle’s ethos. Though combat is a significant component of the game – inevitably, this is a D&D reskin after all – Tingle does strongly advocate nonviolent resolution of problems too. There’s a rule that all PCs must be good-aligned, because you’re supposed to use the game to prove love is real, not to be devilish.