Golden Heroes was first published in 1981 on a small press, hobbyist basis – a labour of love by Simon Burley and Peter Haines, its authors. Come 1984, it ended up getting a revamp and release by Games Workshop: they’d bought the rights to the system as part of a plan to bid for the Marvel Comics RPG licence, and then when their bid fell through (losing to TSR, whose Marvel Super Heroes took a very different approach) Games Workshop decided to not bother applying the Marvel-flavoured reskin and put out Golden Heroes as it stood, in a boxed set which was the basis for a short-lived product line which retains a strong fan following to this day. 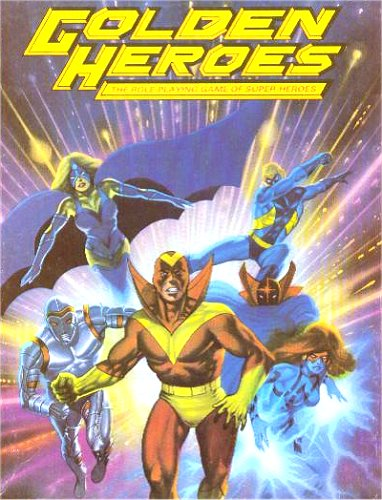 In fact, that fan following is strong enough that even decades after the game went out of print, both the fan community and one of its original designers have kept the flame burning. Codename: Spandex is a full-blown retroclone of Golden Heroes, whilst Simon Burley has kept his hand in the RPG design game (focusing mainly on the superhero genre) and produced Squadron UK, a spiritual successor to the game based on many of the same principles. If you want the Games Workshop version, the original boxed set still pops up on EBay, or if you want to go a bit thriftier with it you can find the actual rulebooks (the only components you strictly need) separately.

What’s interesting about the Games Workshop presentation of the game is that it seems to have later been used as a model for the Judge Dredd RPG in terms of the core booklets both having a reasonable amount of material replicated between them, usually with one booklet having a full explanation of a topic whilst the other has a more limited commentary on it. For instance, the players’ book – imaginatively called the Players’ Book gives the full version of the character generation system, whilst the book for the Scenario Supervisor (what the game calls the referee), the Supervisors’ Book gives some referee-facing advice on it; the full combat system is given in the Supervisors’ Book, whilst the Players’ Book only gives the details players need to know.

In system terms, the game is notable for having a pretty random character generation system with a twist – once you’ve randomly determined your powers, you then have to come up with a plausible rationale for why your character has them – and if you can’t think of a way to make a power fit, you lose it. It’s ultimately a bit of a creative writing and lateral thinking exercise, but a fun one.

There’s also a combat system which is based around an action economy expressed in terms of frames – as in comic book frames – which appropriately enough for the genre assigns the maximum number of frames per round (4) to PCs and significant superhuman NPCs, whilst most normal people get 2 and NPCs in between those extremes get 3. Not only does this show a good understanding of the significance of action economy, but it also sets up one which will tend to favour the PCs and greatly disadvantage the sort of random mooks who shouldn’t be causing significant delays to the protagonists of superhero stories anyway.

The system is rounded off with a downtime system for training, and for the referee to assess such things as how well-regarded each PC is, how much of a master detective they are (which will tend to determine which PC first encounters clues for their next adventure) and so on. The absence of a general action resolution system – the game literally just consists of downtime, combat, and character creation – would feel off, except it actually feels like it reflects the priorities of the American superhero comics which are the game’s avowed influences, especially of the pre-Watchmen era where anything which isn’t some form of action sequence is merely setup for the next action sequence.

One thought on “You’re Indestructible, Always Believe In, ‘Cos You Are Gold(en Heroes)”