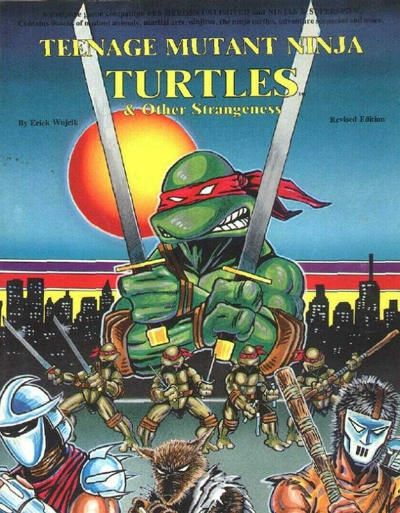 This is to a certain extent to the game’s benefit: rather than being a slick, polished product designed to appease TV networks and other stakeholders, which wouldn’t exactly suit Palladium’s house style, the game instead enjoys the same scrappy, small press style that the original comic has. The illustrations are provided by Eastman and Laird (largely in the form of extracts from the comic, but they also provide the cover art, and there’s an entire Turtles comic story included in the book) and really convey the original energy of the comics which later adaptations tried to soften, whilst the text itself frequently lapses into a highly conversational style which, whilst sometimes ranty or rambly, is at least more entertaining than bland, dry rules text.

About that: whilst the game is credited to Erick Wujick, there’s great gobs of text in here which anyone who has read more than one Palladium rulebook will recognise instantly as originating with Kevin Siembieda; they tend to be the more conversational (and stridently confrontational) sections, and they mostly consist of the little rants that Kevin parachutes into every game using the Palladium system. The familiar breakdown of alignments and its accompanying patter is here, for instance, as is his arguments in favour of his handling of experience points and the like.

To give Kevin his due, as oft-criticised as his rhetorical style has been over the years you at least have to credit him with clearly and emphatically communicating the decision process underpinning his design ideas (especially those where he’s deviating from baseline AD&D). On top of that, whilst sometimes he has a tendency to push matters of taste as objective fact, there’s other instances where he’s right on the money. In his spiel about experience points he explains why the Palladium RPGs don’t detail levels beyond 15th – it’s because in his experience almost nobody plays at such high levels anyway, and the vast majority of campaigns never last long enough to reach 15th level to begin with.

In some printings of the book Palladium’s tendency towards copy-pasting caused issues. It’s bad enough that early versions of the Palladium system’s insanity table included homosexuality as a form of mental illness (they’d tweaked it so that this was no longer the case by the time Rifts came out), but putting the insanity table in the Turtles game felt like an utter nonsequitur. Between this and the offensively simplistic take on the subject the table expresses, it’s just an ugly inclusion, and it’s nice that in later printings the table was omitted.

What, then, does Wujick’s hack to the Palladium system here provide? Well, in terms of its approach it’s a riff on Heroes Unlimited, Palladium’s superhero RPG, with perhaps influence from the martial arts RPG Ninjas & Superspies. There isn’t a superpower system as extensive as Heroes Unlimited, but there is a massive list of templates for different types of mutant animal, based on animal type, and a delightful system for rolling up how you obtained your mutations and to what extent you’ve mutated and where you are on a continuum from wholly animal to wholly humanlike. It’s a simple idea, competently implemented, and for the purposes of playing out an occasional mindless bit of cartoon martial arts violence it’s just what you require (and thanks to using the Palladium system if you want to pitch your Turtles against some absurd monstrosity from any other Palladium game, you can go right at it).

All this said, I feel like the story of the Turtles RPG also conceals in it yet another story about Palladium missing out in a major way due to stubbornness or an inability to recognise a golden opportunity when one falls into their lap. According to Siembieda, sales of the Turtles RPG and its support line collapsed when the cartoon series and movies came out – because whilst those were monster successes, they also has the effect of shifting the demographic targeted by and embracing the franchise.

Whereas the comic book had this edgy vibe as a result of being marketed to a young adult audience – hence the Turtles being Teenage! – the cartoon and the media empire it spawned was aimed towards a younger audience. Literally, it was kids’ stuff, aimed at and aggressively marketed to preteen children. The result, as Siembieda has noted, was that sales of the RPG actually plummeted – because its primary audience had been in the same teenage and young adult demographic as the comic, and if there’s one thing that teenagers typically hate, it’s being seen to have an interest in “kids’ stuff”.

After all, your adolescent years are a time when you are very concerned with asserting an adult identity for yourself and want to be seen as cool and grown-up – or at least, there’s tremendous peer pressure to do so – and even if you personally were brave enough or socially clueless enough to buck that trend, I think most people know people of that age who’ve abruptly declared disinterest in or dislike for stuff you know for a fact that they absolutely loved up to a short time ago, because they’re “too old for that now”.

This syndrome hit sales of the Turtles RPG hard; Siembieda reports that sales went from 50,000 per year to 12,000 to 6,000. Additional supplements stopped being made for the line in 1990 – why throw good money after bad? – and after the announcement of a potential second edition in 1997 was greeted with disinterest by the market (an apathy probably fuelled by the fact that the Turtles bubble had well and truly popped by that point), Palladium gave up the licence in 2000.

If you lived through the late 1980s and early 1990s you know full well what a commercial powerhouse the Turtles franchise was. Their boom in popularity should have been an absolute gift to Palladium, a licence to print money. Siembieda notes that the reverse happened. I contend that this is because Palladium didn’t keep up with the rest of the franchise; whilst the more cuddly, friendly-looking turtles from the cartoon beamed at the world from a myriad different licenced tie-in products, the Teenage Mutant Ninja Turtles RPG still clung to the aesthetic of the original comic book. Palladium had a ready-made audience right there who’d have gladly devoured any Turtles product marketed to them; the problem Palladium had is that they seem to have considered it beneath their dignity to market to kids.

Imagine what could have happened had they swallowed their pride and produced, say, the Teenage Mutant Ninja Turtles Starter RPG – a colourful introduction-to-RPGs product marketed to the cartoon’s audience, carefully designed to be easy for younger players to follow and understand, with an associated module series for kids not yet ready to move up to the full-fat RPG. (TSR was doing precisely this at the time with the division between D&D and AD&D, so it’s not like it would have taken a stroke of genius out of the blue to come to this notion.) Imagine all the newly-minted gamers coming into the hobby via that route – and the loyalty they’d feel to Palladium games going forwards. I reckon you’d see Palladium in much better health these days than it is currently in, and I reckon the starter line would have sold like hotcakes – because everything with a Ninja Turtle on it sold like hotcakes in those days, if properly marketed to the young audience.

Compare this to what West End Games were doing at the same time with their version of Star Wars, the system and core materials of which were will within the grasp of preteen children – particularly the 2nd Revised Edition core book with its friendly characters guiding you by the hand through the rules. I reckon that most kids of 10-12 would be able to pick up that rulebook and figure out how to play a game with it (and bright 8-9 year olds would be more or less able to keep up) which, even if it wasn’t rigorously following RAW or was necessarily all that mechanically deep (by and large D6 Star Wars wasn’t) or was using a great stack of supplements initially, would mint a loyal set of customers who’d go on to be loyal customers. Dungeons & Dragons may have been the main child-oriented onramp into RPGs in the 1980s (in the US – Fighting Fantasy probably reached more kids in the UK), but I am fairly sure that West End Games’ Star Wars game was a significant one given how many people have fond memories of it.

Of course, to write a kid-friendly starter RPG would have required Palladium to not only make substantial adaptations to their systems, it’d also mean they had to rephrase a lot of their standard rules texts and design with an eye to communicating with readers who weren’t already onboard with what RPGs are and how they work. In short, it would require them to make a type of product which, whilst still within their wheelhouse in terms of being an RPG, at the same time didn’t reflect their standard modus operandi. The result: for whatever reason, Palladium decided not to do this, with the result that they ended up uselessly hanging onto the licence for a decade after the Turtles licence had stopped being a major earner for them. What a shame.

3 thoughts on “Lagging Behind the Turtles”