Although the various World of Darkness games unfold by default in the modern day, back in their prime White Wolf eagerly put out various guides – whether as fully standalone games or as supplements to their parent game – to exploring different historical eras of the games’ settings, and perhaps the most successful of these was Vampire: the Dark Ages.

Vampire: the Dark Ages represents a particularly apt marriage of game line and time period. Vampire politics in Masquerade already draws on the feudal, and its main conflicts stem back to fault lines from the original establishment of the Camarilla and Sabbat in the wake of the Anarch Revolt. Set during the medieval period prior to the Revolt, Dark Ages offers players the opportunity to play its ringleaders, or to experience the life of the clans from back before vampires had to tiptoe around and be quite so careful of the human masses, or to generally dial up the feudalism and rule the land as a dark overlord. This sort of action fits perfectly with the way that, say, Dracula is supposed to have ruled over his little region of Transylvania in Bram Stoker’s original novel. Vampire fiction regularly looks to the medieval period for its imagery and its roots – even stuff that’s blatantly copying White Wolf – and Vampire: the Dark Ages offers an opportunity to crank that dial up to 11 in a gaming context.

Naturally, since the 20th Anniversary Edition of Masquerade had done so well out of crowdfunding, it was only to be expected that 20th Anniversary Dark Ages material would get the same treatment.

Just in case this is the first Kickstopper article you’ve read, there’s a few things I should establish first. As always, different backers on a Kickstarter will often have very different experiences and I make no guarantee that my experience with this Kickstarter is representative of everyone else’s. In particular, I’m only able to review these things based on the tier I actually backed at, and I can’t review rewards I didn’t actually receive.

The format of a Kickstopper goes like this: first, I talk about the crowdfunding campaign period itself, then I note what level I backed at and give the lowdown on how the actual delivery process went. Then, I review what I’ve received as a result of the Kickstarter and see if I like what my money has enabled. Lots of Kickstarters present a list of backers as part of the final product; where this is the case, the “Name, DNA and Fingerprints” section notes whether I’m embarrassed by my association with the product.

Towards the end of the review, I’ll be giving a judgement based on my personal rating system for Kickstarters. Higher means that I wish I’d bid at a higher reward level, a sign that I loved more or less everything I got from the campaign and regret not getting more stuff. Lower means that whilst I did get stuff that I liked out of the campaign, I would have probably been satisfied with one of the lower reward levels. Just Right means I feel that I backed at just the right level to get everything I wanted, whilst Just Wrong means that I regret being entangled in this mess and wish I’d never backed the project in the first place. After that, I give my judgement on whether I’d back another project run by the same parties involved, and give final thoughts on the whole deal.

This Kickstarter campaign ran in 2014, when Onyx Path had more or less got the process down to a fine art, and generated some $281, 352 for an asking price of $40,000. Communication was good, if there were any controversies or blowups I didn’t notice them, and generally the Kickstarter was very professionally run.

What Level I Backed At

Onyx Path have had their headaches with some Kickstarters – such as the 20th Anniversary Edition of Wraith or 3rd Edition Exalted – but by and large they’d learned their lessons here and delivery was smooth. Completion was estimated for November 2015, I got my main book in November 2015 – can’t get better than that. (Well, you can review it sooner, I guess.) 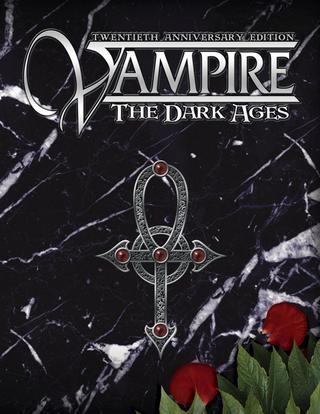 To a large extent, the actual idea behind Vampire: the Dark Ages is quite simple: take the Vampire: the Masquerade system and apply it to medieval Europe in the 13th Century. Back in the original World of Darkness’s run, most of the major game lines ended up getting a historical sub-line like this – notably, Werewolf got a line set in the Old West, because the only thing which could possibly be more awesome than roid-raging eco-warrior werewolves is roid-raging eco-warrior cowboy werewolves. Eventually, however, an overarching Dark Ages line took over all of them, though in retrospect I rather think this was a mistake: each of the historical eras in question were originally selected on what was actually a quite sensible basis in order to tease out the best in each individual game line, and medieval Europe is a nicely evocative milieu to set Vampire in.

Part of this is simply down to the fun you can have with a twisted, horror-oriented take on feudalism: if you really want a heavy-handed but powerful way to illustrate the inequities of medieval society, make the local lord a vampire. In addition, the combination of the previously established mythology of the Vampire: the Masquerade line and the different cultural mores of medieval Europe open the door to a very different take on vampires without having to radically change the way they work in terms of game mechanics.

By setting a game in a time period where the Anarch Revolt has not yet happened, but is close enough that the first rumblings can be felt, Vampire: the Dark Ages allows gamers to play through those events should they wish, and gives groups the option of changing the Revolt’s outcome the purposes of their table. Moreover, starting out a Vampire campaign in a historical period means that you can bring the immortality aspect of vampirism into play in a game where the player characters start out comparatively newly embraced without having to make up future history – and the march of technology is sufficiently slow at this point in time that, for game mechanical purposes, you can get a few centuries of play in before the PCs’ skills start to look a little archaic.

So, is there a justification for making this a separate game, rather than just a supplement for Vampire: the Masquerade? On balance, I think so. Though to a large extent this is a reskin of the core Vampire book, there’s enough differences that to have to juggle two books all the time to run a Dark Ages game would be profoundly irritating. The clans have all been subtly tweaked to fit into the somewhat different setting, era-dependent aspects of the game system have been altered, the range of disciplines available differs somewhat, and so on. That said, Onyx Path are well aware that Vampire: the Dark Ages was primarily of interest to people who were already keen on Masquerade, and so little effort has been made to make this an entry-level product: it makes no apologies for assuming that people using the book are familiar with Masquerade, and by doing so can cram an extensive range of material between its covers.

Whilst a bit more description of the era might have been desirable, ultimately the human history of the period is something most referees would be able to research for themselves, and the vampiric history is something an imaginative referee can cook up by themselves. The actual Kickstarter edition itself is a handsome leatherbound tome with wonderfully atmospheric art, three useful ribbon bookmarks, and a genuinely useful index, making this a very handy edition for use in actual play and a satisfying product overall.

Nice-ish art, reasonable choice of information for the reverse, panels in portrait orientation instead of landscape which is a bit annoying. Other than that last part, it’s kind of hard to screw up this sort of thing, and Onyx Path don’t screw up here. 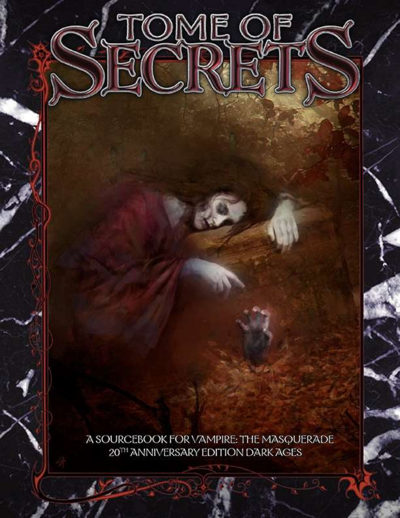 Populated by stretch goals, this is a grab-bag of miscellaneous material. You get a fat stack of in-game fiction which pads out the page count a little, some more details on various types of magic, faith, and infernalism, and you get some more consideration of what actually means to be a vampire of the knightly class. Like the  V20 Companion, its nature as a deliberate mixed bag of miscellanea combined with its brevity tends to make it feel a bit more lightweight than a supplement dedicated to fleshing out a particular subject. 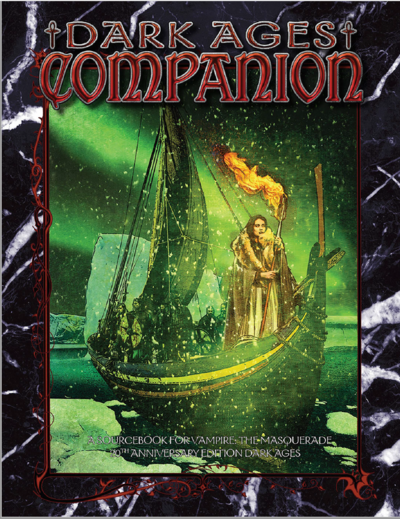 Consider, by comparison, the Dark Ages Companion for the V20 Dark Ages line – not one of the Kickstarter stretch goals, but a useful addition to the lines. This consists of a set of basic descriptions of some Vampiric communities across the setting, ranging from England to India, along with a chapter offering guidance on cooking up your own medieval vampire domains. Each chapter includes some special clan-specific information germane to the subject matter at hand as a bonus. This collection of worked examples is extraordinarily useful because it gives you a diverse range of ideas of how to make medieval vampire communities that work and how to develop a workable setting for the game; each domain described is different enough to feel unique whilst still steeped in the style of the era, which means it’s also helpful for old hands who want to shake themselves out of a rut.

Yeah, I’m happy with my name being in the back of the main book here. I’m an official Vampire Lord, how can that not be cool?

Well, I’ve backed, received, and reviewed entire Onyx Path Kickstarters since then, so obviously the answer here is “yes”.