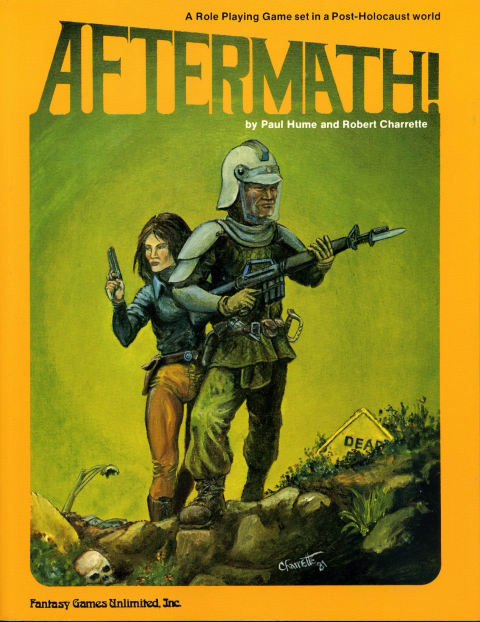 Aftermath! emerged from the rubble of Phoenix Games just as its characters emerge from the rubble of a grand civilisation-collapsing disaster (which the game leaves to the referee to specify, with some advice on how they reckon such a disaster would unfold); first printing copies can be identified by the fact that the FGU logo is on a sticker, hastily slapped over the Phoenix Games logo before the game went to print.

As well as being an entry into the then-new postapocalyptic subgenre, Aftermath! also seems to have been Hume and Charrette’s attempt to generalise the principles underpinning Bushido into a generic RPG system; the first booklet in the box offers up setting-agnostic Basic Rules For Roleplaying Simulation, which the other booklets then provide the Aftermath!-specific character creation guidelines, equipment details, and other setting-specific rules and guidance for. Hume and Charrette would later use a variant of the same system for Daredevils, FGU’s attempt at a “pulp adventure” RPG inspired by the likes of Doc Savage. (Hume and Charrette would later find themselves collaborating again as part of the design team for 1st edition Shadowrun – a setting which arguably mashes up their interests in cataclysmic societal shifts, weeabooism, and pulp adventure into a delicious cyberpunk-fantasy milkshake.) Because BRFRS is an awkward acronym, I’ve chosen to think of the system as the Phoenix System in honour of Phoenix Games, since whilst it didn’t originate under their auspices, it was under their watch that Hume and Charrette made the decision to try and make it a multi-genre system.

The system has a bit of a reputation for being complex, but I’d actually say it isn’t that bad. What complexity there is isn’t unnecessary for what they want to accomplish, particularly by the standards of the day. A lot of people point to the fact that the combat system routine is illustrated by a flow chart as an indication of its complexity, but I would say that if you illustrated the combat sequence of other games of a similar vintage (and a good many newer games) with a flow chart, the chart that resulted would be comparatively complex if not more so. As with Bushido itself, it’s perhaps better to say that the system is expansive rather than complex; there’s a lot of rules, but the rules cover lots of different situations, so if you want to fall back on them to adjudicate something the safety net’s there for you but you aren’t necessarily obligated to take every rule into account when running a particular scene.

What’s particularly interesting about Aftermath! is the way that it makes the age stat relevant in a way it rarely is in tabletop RPGs (since, outside of generational games like Pendragon, it’s rare that sufficient time passes in a campaign to make character aging particularly relevant). You see, the baseline assumption of Aftermath! is that campaigns take place about 2o to 30 years after the collapse of civilisation. That means that whilst older PCs will vividly remember the old ways, younger PCs will have more fragmentary recollections of them, or no memory at all, and will have grown up in a very different world – a fact reflected in their base skills and so on.

An endearing feature of Aftermath! is how much thought Hume and Charrette clearly put into the subject, as well as their willingness to regale the reader with anecdotes from their playtesting campaign to illustrate the possibilities for interesting roleplaying in a comparatively downbeat setting. Whilst some postapocalyptic fiction can form the basis of a sort of right-wing survivalist-type fantasy which revels in the destruction of the old social niceties, Aftermath! disapproves of overt banditry and warlordism (though doesn’t stand in the way of players taking their characters in such a direction if they want to), and hopes that PCs will focus on concentrating on building new communities and keeping hope alive (an approach paralleled by supplements such as Into the Ruins).

A nice aspect of the game is the leeway it gives the referee to choose the nature of the catastrophe, and the wide range of tools available to implement it. Why, there’s even guidelines for using the game to run a world where human beings have been displaced by damn dirty apes, presumably because some maniacs – damnable to hell the lot of them – blew everything up. With the game as adaptable as it is, Aftermath! feels like a solid addition to any postapocalyptic RPG collection.

3 thoughts on “From Ronin To Radiation…”