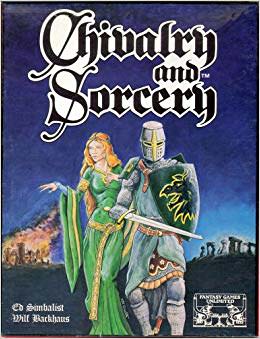 If 1st edition wasn’t sure what sort of game it wanted to be, 2nd edition has no such confusion: it is unambiguously a roleplaying game. The mass combat system intended to be fully played out with miniatures and whatnot is excised from the core rules (with a fully revised one appearing in the 2nd edition of the Chivalry & Sorcery Sourcebook and Sourcebook 2 including a much more abstracted resolution system), though aside from that the three booklets of the 2nd edition core set includes more or less everything that 1st edition had. (The major exceptions are that the more obvious Tolkien references are toned down – likely for legal reasons – and that the rules for courtly love are removed, likely because it was felt that such content, if even desired by players, could be dealt with through roleplaying without system support.)

In fact, to a certain extent the second edition of the game couldn’t include many changes. Though still credited to Ed Simbalist and Wilf Backhaus, the 2nd edition was largely shepherded into existence by Simbalist himself; Backhaus had fallen out with Simbalist and Fantasy Games Unlimited at the time and wasn’t on speaking terms with them, and it was felt that if major changes not approved by Backhaus were made to the game he might use the leverage his contract gave him to block publication.

This is presumably why the main thing the 2nd edition adds is clarification, and it’s decidedly welcome in making some of the game’s quirks make more sense in context. For instance, one of the few modifications to the system is that rather than stats being rolled D&D-style, they’re bought on a point-based system – except you have a randomised number of build points, with the randomisation taking in a particularly wide span of potential points. However, this is more acceptable when you note that Simbalist assumes that every participant in a campaign will have at least two player characters (not necessarily “onscreen” at the same time, mind), and later breaks down character types and professions into those which are suitable for adventuring and those who are more suitable for supporting cast-type roles.

These clarified assumptions make the randomised point totals seem much less unfair – if you roll a character who falls well short of the capabilities of the rest of the group, just stat them up as a background peasant and leave them at home, and roll up someone else to be your actual adventuring character. The clarification that not all character types offered are necessarily adventure-worthy is also helpful – it eliminates head-scratching over why a perfectly comfortable brewer is risking her neck in a dungeon.

What, then, is the point of having that brewer as an available character type at all? The answer there lies in the really strong emphasis which 1st edition did mention and 2nd edition really brings to the fore, which is that Chivalry & Sorcery is about trying to present a full-blown society – as opposed to D&D, in whose original presentation social institutions were either nonexistent or offstage and which gave PCs almost no hooks into the setting, Chivalry & Sorcery is highly concerned with rooting PCs in a social context, and chooses to mimic that of medieval Europe because it is one which would be already familiar to many gamers. (Backhaus and Simbalist had noted how Empire of the Petal Throne had tried to root PCs in its setting, only to run into issues due to the setting being so unfamiliar.)

Your non-adventuring characters, then, exist to round out that society; whilst in most RPGs the referee would be expected to play all such roles, giving the players characters whose well-being is in part dependent on the safety and well-being of the town or village they reside in helps generate investment in the outcome of adventures. It also suggests a forerunner of the troupe-style play enunciated more clearly in Ars Magica later on; perhaps in a Chivalry & Sorcery campaign you’d split your time between sessions focusing on the deeds of knights and wizards and other powerful sorts, and other sessions focusing on more humble characters and their dramas and crises. Perhaps that bandit group your PC knights chose not to pester last session turn up at your peasant PCs’ village next session and make a ruckus. With the improved clarity and organisation of 2nd edition, it’s also easier to use the game on a pick-and-mix basis; whilst you wouldn’t want to deploy all the rules all the time, when the action of a session focuses on, say, courtly politics, or constructing a castle, or rebuilding a village, or crafting magic items the information is there for you to use when needed. 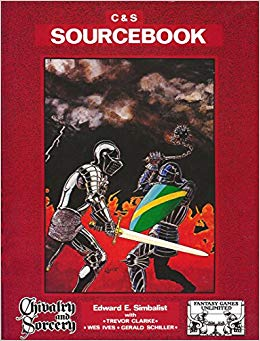 Ed Simbalist blames the end of the FGU era of Chivalry & Sorcery on the fact that he was dividing his time between that game line and Space Opera, a game which FGU had commissioned him to design and line manage as their bid to compete with Traveller and other early science fiction RPGs. Whilst I’m not sure about that as far as the main set goes – it looks to me like a welcome revision of the game – I can perhaps see his point when it comes to the supplement line. The 2nd edition Chivalry & Sorcery Sourcebook is largely just a reprint of the 1st edition Sourcebook, with some material excised (mainly the stuff clarifying commonly-misunderstood rules in 1st edition, since of course those clarifications got folded into the core rules) to make way for the revised wargame system. For someone who already owned the 1st edition Sourcebook, that wouldn’t seem like particularly good value – especially if they weren’t keen on adding a miniatures wargaming dimension to their campaign.

Two more 2nd edition supplements – Sourcebook 2 and Swords & Sorcerers – got even cheekier; for both of those, Simbalist and FGU didn’t even bother altering them. They are literally just the 1st edition versions of those supplements, bound in a different cover. Swords & Sorcerers is interesting for the new cultures it adds to the game (ranging from Norse Vikings to Mongols), whilst Sourcebook 2 is largely a big fat example of how Ed Simbalist’s love of complex rules got the better of him (nobody needs rules for lockpicking and door construction this detailed!) but offers some value in the abstract mass combat system provided. Still, anyone who owned the original supplements must have felt that FGU was trying to scam them with the rereleases, and the small ways in which the 1st edition system differed from 2nd edition posed pitfalls here and there. 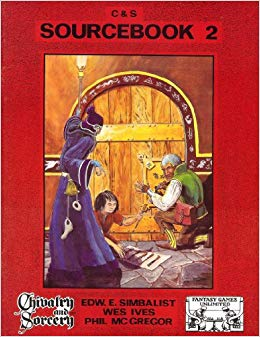 After this, FGU put out a couple of poorly-received adventures in 1984 before ending their support for Chivalry & Sorcery – a stark difference in comparison to their support for 1st edition. Whilst the botching of the support line was doubtless a major contributor to the game being discontinued by FGU, I have to also think that it also had a lot to do, as I said in my previous article, with the cutting edge of game design passing FGU by. With products like RuneQuest, Rolemaster, and The Fantasy Trip all offering fresher experiences, and with AD&D and the new basic D&D line giving D&D a much-needed tidy-up and a new coat of paint, 2nd edition Chivalry & Sorcery still too obviously was a product of 1977-era design attitudes, at a time when RPG design was advancing very quickly indeed. However, by showing its thinking better, 2nd edition Chivalry & Sorcery makes it easier to follow the logic behind its design, and thereby makes it easier to draw what you need to from Chivalry & Sorcery whilst cutting the chaff.

7 thoughts on “Chivalrously Giving It Another Chance”