In retrospect, it’s kind of weird that Wizards of the Coast hasn’t done more crossover material between D&D and Magic: the Gathering. One can easily imagine a parallel universe where Wizards churned out worldbooks for the various worlds of Magic to feed the ever-hungry 3rd edition market, had they been less conservative about the number of settings they were willing to directly support for the game (having been, perhaps, scared off the idea of supporting large numbers of settings as a result of TSR’s experience overstretching itself). It would, after all, be an easy enough crossover to accomplish – and you’d have a wealth of art already done for the setting in question in the form of the cards related to it.

As it stands, it’s taken Wizards until their third edition of the game to finally get up the courage to cross the streams. The Guildmaster’s Guide to Ravnica is a campaign guide to the titular gameworld, dominated by a grand metropolis ruled by a set of ten distinct guilds. Rather than taking the route taken by TSR with the 2nd Edition settings – or even by Wizards themselves for 3rd Edition settings – the major hardcopy products have been kept strictly limited: just the book itself and a Maps & Miscellany collection of useful maps and handouts. 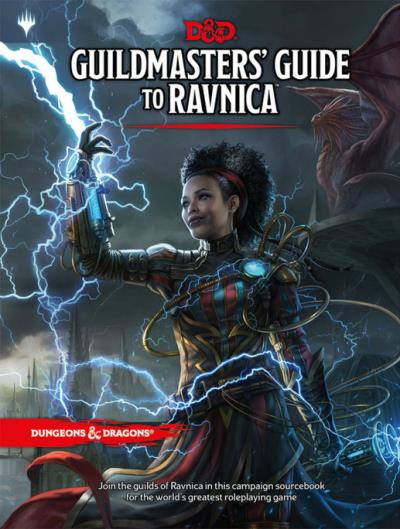 By and large, it’s a supplement much along the lines of the Sword Coast Adventurer’s Guide, giving a range of character generation options, treasures, monsters, and suggestions for adventure design in a package useful to players and referees alike. The Guilds, being the distinctive feature of the setting, naturally get a lot of attention; indeed, between their inclusion, the somewhat more technologically advanced nature of the setting, the idea that the setting is used to Planeswalkers showing up thanks to the central conceit of Magic, and the rules and framework provided for modelling rank and its benefits within the Guilds, the book is highly reminiscent of Planescape, to the point where it could be used as a model for a 5E take on Planescape if Wizards ever decides to go back to that well (or if you want to homebrew one yourself).

Another major commonality it has with Planescape is a really distinctive aesthetic. Here’s the real advantage of drawing on Magic: because in that context a lot of the flavour, lore, and general atmosphere of the game’s various worlds has to be conveyed through the medium of the cards, the artwork for the cards has to carry a lot of the weight of that. As time has gone by, this has become more generally understood and appreciated by the Magic team; if a picture is worth a thousand words, the Magic artists have Ernest Hemingway-esque skills in terms of how much they can cram into those words. This is just as useful in an RPG book as it is on Magic cards, and with full-size pages to work with rather than just the cards themselves the artists do a fantastic job of getting across the atmosphere of Ravnica, just as Tony DiTerlizzi nailed the atmosphere of Sigil.

On the whole, I’d say Ravnica has proven to be a truly worthwhile addition to the D&D campaign setting roster. In particular, it could provide a good example of a Prime Material world with extensive links to other planes of existence – something which the Planescape campaign setting sorely lacked. Indeed, you could run an entire Planescape game using Ravnica as an alternate player character “home town” to Sigil – or replacing Sigil entirely if you find the Ravnica Guilds more interesting than Sigil’s Factions.

One thought on “Mini-Review: How Long Has This Been On the Cards?”