Finally, to polish off my Dragonmeet hoard of 2018, I picked up the five booklets that make up B/X Essentials. As the title implies, this is a retroclone of B/X D&D – the rules version decided by Tom Moldvay and David “Zeb” Cook in 1981.

This is a widely-cloned version of D&D, so what does Essentials bring to the table? Produced by Necrotic Gnome, the B/X Essentials booklets are designed from the ground up for at-the-gaming-table utility. It’s not a version of the game which offers extensive guidance and examples and explanations or otherwise tries to teach the game to you; instead, it focuses on clearly-stated presentations of rules information optimised for use mid-game. 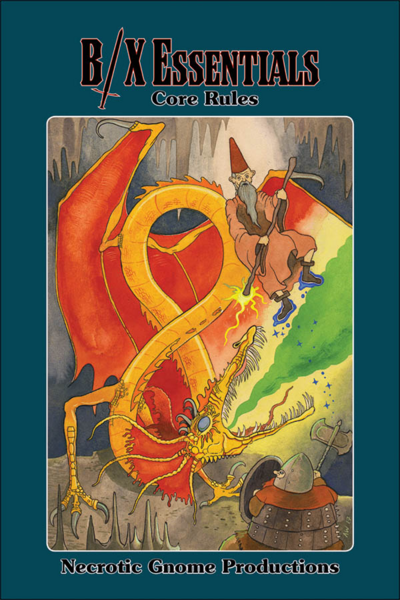 For the most part, this is the game as originally devised by Moldvay and Cook (as opposed to Labyrinth Lord, which differs in a number of respects), with errata incorporated, a little invention here and there to patch obvious holes (like how there’s a spell that the original B/X booklets mention in passing but don’t actually provide rules for), some rephrasing of the rules so as to abide by OGL requirements and add clarity, and with the different sections integrated together and then separated into different booklets. So, for instance, the Monsters book covers all the monster stats, whilst the Cleric and Magic-User Spells book covers all the spells. If you are working from the original B/X booklets, this is already an improvement – no more having to remember which booklet a particular spell or monster was found in!

In addition, the Necrotic Gnome (Gavin Norman) has made the layout clear, legible, and tried to ensure that as much as possible the discussion of a topic fits into at most a single two-page spread – so, for instance, in the Core Rules booklet, the rules for chases and pursuits are all on a single two-page spread, so once you’ve found them there’s no further page-flipping needed. Norman even goes so far as to provide the details of how spell effects work with treasure descriptions as much as possible, to minimise cross-referencing between the treasure description in Adventures and Treasures and the spell booklet.

Between them, these five booklets – Core Rules, Classes and Equipment, Cleric and Magic User Spells, Monsters and Adventures and Treasures represent perhaps the easiest way to play basic D&D available, provided you have a sufficiently experienced referee to run the game. However, while I’m not sorry to own these booklets, at the same time I’d advise people to wait a little before purchasing them themselves.

The reason for that is that, Necrotic Gnome actually intends to make further improvements to the line. A recent Kickstarter for a new edition – retitled Old School Essentials to make the name a bit less inexplicable to those who don’t follow the fine differences between versions of basic D&D – has just wrapped up. Forthcoming are new versions of the booklets – hardcovers with stitching such that they can lie flat on the gaming table – along with a complete-in-one-book version for those who’d prefer that – incorporating some further errata and improvements as well as paving the way for making the game line more extendable. Supplements were funded as stretch goals, for instance, to provide a range of extra character classes not found in B/X, options for playing with an AD&D-style race/class split, and to cover druid and illusionist spells, and one could even see the range continuing to cover other genres like a Metamorphosis Alpha/Gamma World-esque world of mutants and mayhem.

I don’t feel like my B/X Essentials booklets are at all redundant as a result of this, mind; having extra copies at the gaming table adds utility. But at the same time, Necrotic Gnome have suspended sales of the original B/X Essentials on DriveThru so as not to sell a product which is about to be superseded, and I am greatly looking forward to what the Kickstarter yields. Tune in for the inevitable Kickstopper article to see how that goes!