The fifth edition of Pendragon has proven to be its longest-lasting edition, having originally been published in 2005 and remained supported by some publisher or another ever since. The original release of 5th Edition, with its cover art depicting Arthur fighting… erm… a giant piggy, came about through ArtHaus Games – an imprint of White Wolf, would ya believe it – before the purchase of White Wolf by CCP and the departure of Stewart Wieck, whose baby the ArtHaus imprint was. Wieck’s new Nocturnal publishing house was the home of Pendragon for some years, until recently it made its triumphant return home to Chaosium. 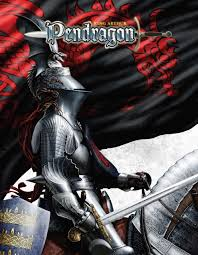 Over time, Nocturnal made a couple of patches to the fifth edition core book. The 5.1 revision, which I never got around to looking at, incorporated some errata and corrections and sported new cover art of Arthur accepting Excalibur from the Lady of the Lake. More recently, the upgrade to Edition 5.2 – the version you can currently get from Chaosium – took place. Folding in further corrections and embellishments, the book also benefits from an updated layout, which is delightfully clear and readable, and a gorgeous interior with subdued but welcome use of colour. Perhaps the biggest upgrade is the use of the absolutely gorgeous artwork from the Spanish translation of the game.

Is it worth the upgrade? In my case I’d say yes, if only because my old copy of the ArtHaus edition is beginning to feel fragile after the rigours of play in my old Pendragon campaign. On the whole, I would say that it’s still essentially the same take on the game as was offered up in 2005, so if you already have the ArtHaus version or the 5.1 edition you don’t urgently need the upgrade – but it is undeniably an upgrade and given a choice between 5.2 and another version I’d go for 5.2.

3 thoughts on “Mini-Review: A Patch For Pendragon”