It’s been a little while since the core rules for the new edition of RuneQuest made landfall, and now the physical versions of the major core supplements – the Glorantha Bestiary and the Gamemaster Screen Pack – are out in the wild too (along with a handsome slipcase to hold the treats in). 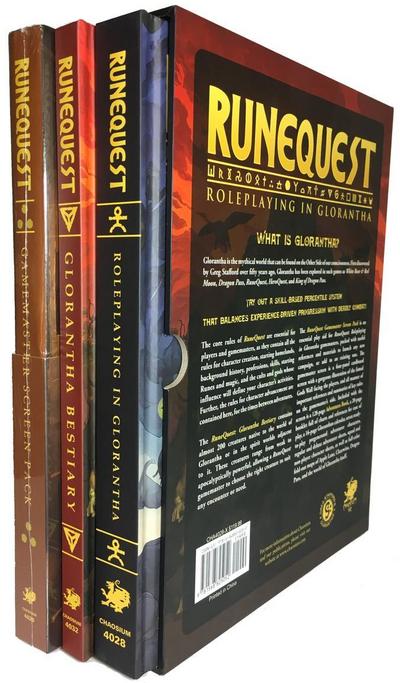 In my review of the core rules I found them to be a credible return to RuneQuest‘s old stomping grounds – how do these first expansions stand up? 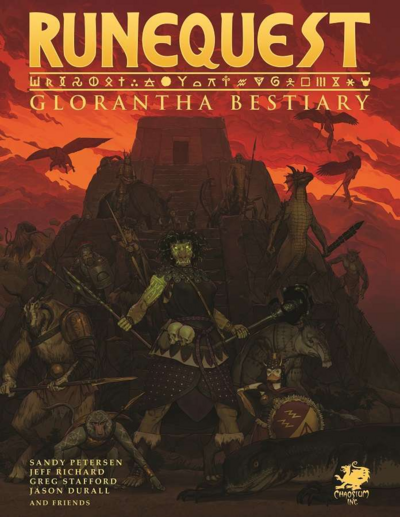 This is an expansive look at a range of creatures from the world of Glorantha, but is no mere Monster Manual rehash. If I had to compare it to any of the D&D monster books, in fact, I’d instead nominate 2E’s Monstrous Compendium, which went out of its way to include entries for each creature on its ecological niche and social behaviour.

The Glorantha Bestiary doesn’t go into that full level of depth for every single creature that appears in it; instead, it’s a bit more selective about what creatures it doles out additional information on. The Elder races – elves, dwarves, dragonnewts, and so on – tend to get extended entries covering their history, culture, and so on, and where appropriate sidebars are given detailing how to create a player character hailing from a particular nonhuman race. (Yes, this includes duckitywucks). Many intelligent species also have details on their particular cults or magics. Indeed, the book leads out with a discussion of the portrayal of nonhumans with human-like levels of intelligence, imploring the referee not to treat them like MMO-style trash mobs for the PCs to slaughter without conscience but instead to play them like people with their own interests and personal drive to survive.

Such has always been a difference in how RuneQuest has tended to handle nonhuman creatures compared to other RPGs, which is just as well given the lethality of its combat system; parties who insist on fighting everyone they encounter surely won’t last long, if only because sooner or later one of their foes is going to get lucky. It’s nice to see the new edition continuing that approach. 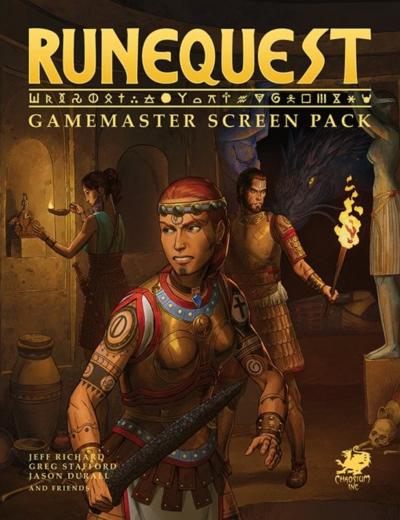 Referee screen products tend to be afterthoughts in lots of game lines; in many cases the most you expect is a decent screen and a desultory little booklet with reference tables or a short adventure or something. Chaosium have in recent years tried to work against the grain on that, with the Call of Cthulhu 7th Edition screen pack coming with a pretty decent adventure supplement; for RuneQuest, they’re really pushing the boat out.

The screen itself is in the sensible orientation (landscape panels) and the player-facing illustration offers instant flavour in the form of the Gods Wall – a grand mural which the followers of Yelm depicts every deity of Glorantha. You also get a bunch of paperwork with it – including a number of really nice maps (resolving my complaint about how some of the maps in the core book were hard to read – the versions of those maps here offers much-needed clarity), a handy calendar, and a booklet of useful tables and the like.

The star attraction, though, is a thick adventure booklet of some 128 pages. Far from the meagre offerings other game companies offer with their GM screen packs, this booklet offers an in-depth guide to the Colymar Tribe, a recommended starting focus for a new RuneQuest campaign, along with details of their main fort at Clearwine (a new fortification following the Dragonrise and the tribe rising to slough off Lunar domination) and the settlement of Apple Lane.

Apple Lane is a familiar locale to RuneQuest grognards, having been the subject of an early module, and the adventures offered here essentially offer a sequel to the original Apple Lane module – not in the sense that the action follows directly on from the action of that, but in the sense that the settlement has been comprehensively updated to suit the evolution of the Gloranthan setting since then, and the adventures presented and the potential outcomes of them emphasise the community-focused nature of the new edition of the game. Becoming thane, having to deal with ransoms and blood money, and founding new cults are all possibilities here.

Truly, between this wealth of materials Chaosium have set a new bar for GM screen packs, and it’ll be interesting to see if anyone attempts to step up to the challenge in the future. That said, astonishingly enough given how much is stuffed in there, there’s actually some bits missing from it; the rear promises “Rune Fixes”, an errata and FAQ list, though the absence of this is no biggie since these are also on the Chaosium website (and there don’t actually seem to be an awful lot of them – the core rulebook’s pretty solid in that respect). The core RuneQuest: Roleplaying In Glorantha book said that there’d be an alternate character generation system for fast character gen in the Screen Pack, but if there is I cannot find it anywhere. (That said, if you wanted to quick-roll a duck or something, there’s guidelines to do that in the Glorantha Bestiary, and it isn’t that hard to infer how to do the same for a human based off that.)

Despite these hiccups I’d say that, between this and the Bestiary, it feels like RuneQuest Glorantha already has a true wealth of support, but with more material coming down the pipeline in the form of an extensive gods book to be this edition’s equivalent of Cults of Prax/Cults of Terror, it feels like a new golden age for Gloranthan-based RuneQuest is truly beginning.

One thought on “Inscribing the Core Runes”