Terror Australis was an early Call of Cthulhu supplement – it originally came out in 1987 – which has been left fallow for some years, only to now receive a major new rerelease for 7th Edition Call of Cthulhu. Both the original supplement and new edition involve significant amounts of work from Australia-based game designers including Penelope Love and Mark Morrison, whilst the new edition has been substantially enlarged and revised. 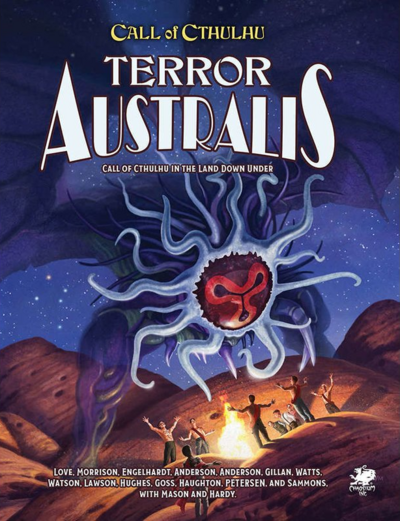 The supplement is a guide to Australia in the 1920s, and seeds the threat of the Cthulhu Mythos within the island continent – both in terms of homegrown horrors (such as the Great Race of Yith and their enemies, the flying polyps, thanks to Lovecraft setting the climax of The Shadow Out of Time in Australia) and nastiness brought to the continent by the settlers.

The stark divisions between Aboriginal and Torres Strait Islanders on the one hand and the culture of the British-spearheaded settlers on the other hang heavy over Australian history, and this new edition of Terror Australis goes out of its way to ensure that the Aboriginal view is represented (to the extent that it can, given that the term covers a range of distinct cultures – remember, Australia’s about the size of the continental USA). The respect given to Aboriginal viewpoints extends to including a warning at the start of the book that it contains images and names of deceased people – something which can be a taboo in some Aboriginal cultures.

Likewise, it makes sure that the settlers are not depicted as just some homogeneously white monoculture, and notes where the “camp” community (as the LGBT+ folk of 1920s Australia thought of themselves) tended to meet up back in the day. In effect, it presents a diverse view of the era as well as a deep one (there’s a fairly extensive discussion of the law enforcement and penal system, this of course being something which investigators might tangle with), giving the setting a similarly diverse treatment as Down Darker Trails did with the Old West.

In the case of both supplements, this emphasis on diversity doesn’t come across as an incongruous imposition of modern-day attitudes on a historical setting so much as it is the uncovering of historical facts which intervening years of social disapproval had tended to gloss over; grumps might gripe about the “SJW agenda” or whatever, but the fact remains that acknowledging the experience of a range of different peoples is actually more historically accurate than oversimplifying everything into a monoculture.

The parallels in approach between Down Darker Trails and Terror Australis go beyond restoring the diversity to a previously-whitewashed history, however: both settings arguably meet much the same niche in their different eras. Whilst the time of the Old West was more or less wrapped up by the 1920s, the Australian Outback of the same era has many of the same characteristics. You have a local population increasingly hemmed into reservations and whose persecution is frequently overlooked by the government (where the government is not an active and enthusiastic accomplice in it); you have frontier towns made by incoming settlers, and enough wilderness to get well and truly lost in. It’s not identical, but it’s not wholly dissimilar either. For more urban-based inquiries, there’s fairly expansive guides to a number of significant Australian cities, sprinkled with adventure seeds.

As well as supporting conventional Call of Cthulhu investigative endeavours, the supplement also includes a system for interacting with traditional Aboriginal alcheringa concepts – entering the so-called “Dreamtime” and enacting the stories there to gain knowledge or produce effects in the world. This is a concept so close to Gloranthan-style heroquesting (inspired as that was by Greg Stafford’s own shamanic practices) that I suspect it was folded into the supplement simply because Chaosium recognised an idea that they’re fond of and got enthusiastic about it, but that said whilst it’s rather extensive and a bit involved it’s not without parallels in Down Darker Trails either – that had some pointers for how to run Native American shamanism as though its purported magical effects were real.

I’m in two minds about this sort of stuff. Any such system can only be a massive oversimplification of the beliefs involved, particularly since the systems tend to fall into the trap of treating the relevant populations as monoliths rather than the diverse range of different cultural groupings that they actually represent. That said, I feel like if you are running a Call of Cthulhu game where other forms of folkloric practice tend to have a reality to them – where a non-Mythos vampire can be warded off by a crucifix, for instance, or where a werewolf is weak to silver, or whatever – then you’ve got to at least give some consideration to ascribing a similar effectiveness to the magical practices of other cultures, otherwise you end up in the situation of saying “This culture has it Almost Right; this culture has it Almost Entirely Wrong”.

At the same time, though, I feel like alcheringa doesn’t quite feel thematically appropriate to Call of Cthulhu, any more than Christian religious visions a la Hildegard of Bingen would fit in. That’s not a reason to disrespect it as a religious practice – but for the purposes of playing a game which explores cosmic horror, it’s a perfectly cromulent policy to say “The folkloric and religious practices of traditional cultures are of no avail against the powers of the Mythos, which after all reflect a science far beyond our own science, and whilst these practices may provide comfort and succor to the people that practice them, you can’t ritually make rain happen with Native American shamanism any more than you can do it with Torres Strait Islander traditions or with European witchcraft”.

On the whole, Terror Australis makes a potent case for 1920s Australia as a highly promising setting for Call of Cthulhu – either to visit, or to set an entire campaign in. The local culture – both indigenous and settler – is vividly depicted, but at the same time the same rules of thumb apply when the Mythos goes rampaging in Australia as it does anywhere else – when you hear, when you hear the thunder, you better run, you better take cover.