Alone Against the Dark is a solo adventure for Call of Cthulhu – a valiant attempt to cram a globe-trotting campaign on the scale of Masks of Nyarlathotep into a thin gamebook which almost, but not quite, succeeds.

The gamebook deploys several clever innovations to add useful options in play without needlessly wasting paragraphs – like the scope to telephone places or the use of a single paragraph to describe the process of using medical facilities, whether the place in question is a world-class hospital or a lonely ship’s medical bay. The cleverest thing about it, however, is the way it incorporates an honest-to-good method of providing multiple “lives” in a gamebook adventure. Though you only play one character at a time, when your character dies that isn’t the end of the adventure – you instead go to the starting paragraph of the next pregenerated character, who it is assumed has been largely filled in on what has been going on by regular telegram and, with the flow of telegrams having stopped for some days, is prompted to spring into action themselves. 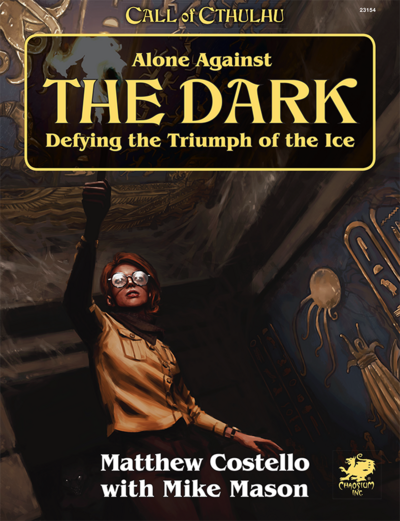 The pregens themselves have 150 unspent skill points each, so you can personalise them as you see fit, though they each have their specialties – you begin with an aged academic and end with a tough muscley sailor lad – presumably because the later in the investigation it is, the more you’re going to need to resort to violence. It’s only a full-fledged “game over, start again” situation if your fourth PC (the Tom of Finland pinup) dies. In principle, it’s possible to finish the investigation with your starting character still alive, though you’d need to be both clever and lucky to manage it.

The major downside of the adventure is the painstaking timekeeping it demands; it literally requires you to account for every single hour of every day, including 8 hours for sleep and 2 hours for eating, each meal hour suitably separated from the other one. Though there’s some important plot stuff which does hinge on timing, equally I feel like this level of bookkeeping and fiddling about amounts to overkill – far, far too much effort on the part of the player for the payoff it gives. It feels like Alone Against the Dark might be better off were it adapted to Cthulhu Chronicles as a result; then your mobile could handle the bookkeeping and as a player you wouldn’t spend half the playing time ticking off hours and planning meals.

3 thoughts on “Alone Against the Book-Keeping”