One of the most fun aspects of character generation in 5th Edition Pendragon is the Family History tables in the core rulebook. Assuming your campaign will begin in the Uther period and will focus on knights based around Salisbury, these tables allowed players to work out what their first PC knights’ fathers and grandfathers had accomplished in the struggles against the Saxons in previous generations – both giving starting characters a small amount of glory based on those deeds and a sense of family history (with attendant Passions) that help give shape and depth to characters early on.

It’s rather lovely, but somewhat limited to PCs starting out at that point of the Great Pendragon Campaign, in that particular region. That’s in general sensible for a starting Pendragon group – Greg chose Salisbury as being reasonably close to much of the early action, and I suspect most groups would want to begin their story at the beginning of the narrative.

That said, it would be nice to have this option for a wider range of starting locations if a referee has decided that they want to focus the campaign somewhere else, or if they want to give their players the option of playing knights from further afield who’ve come to Salisbury (or whatever other starting location the referee has chosen) to seek their fortune. After all, a consequence of the feudal system as depicted in Pendragon would be that you’d expect knights who either didn’t inherit much from their fathers or, due to being younger sons or being driven off their homelands, didn’t inherit anything at all to try their luck further afield in the service of lords with lands to spare. Similarly, it would be nice to have the option of using the family history system but with a bit more freedom about campaign starting date. 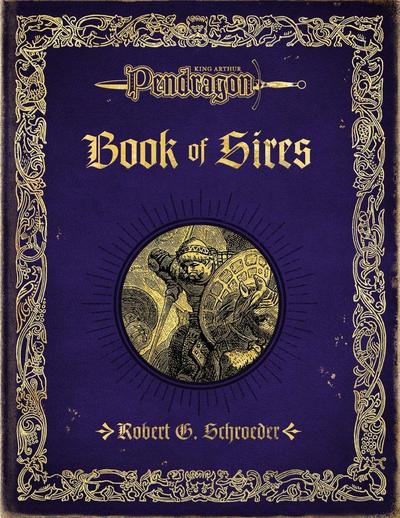 The Book of Sires, the first Pendragon publication to be released after the passing of Greg Stafford (it’s penned by Robert G. Schroeder), is a comprehensive expansion and rethink of the Family History rules, designed to accommodate knights hailing from nine different regions. Though obviously focused on Logres, this can also include knights hailing from as far away as Aquitaine, from regions which give rise to interesting dilemmas like Cornwall (who do you side with when Uther comes for Ygraine?), and even a newly-introduced subfaction of the Saxons who decide to side with the Britons against their Saxon kinfolk. It’s a simple idea which requires a lot of hard work and cross-referencing to produce the actual tables for, and Schroeder’s done sterling work in producing such and providing clear guidelines on their use.

Particularly welcome is the appendix which allows you to extrapolate the Family History process forwards, based on The Great Pendragon Campaign, to allow for campaigns starting in the Anarchy following Uther’s death or the Boy King period when Arthur makes his presence felt, which also feels very useful to me – I can see the Uther and Anarchy periods as being the periods groups are most likely to skip, if they’re impatient to get to Arthur himself, but equally I wouldn’t want a Pendragon campaign to start much later than the Boy King period because you don’t want to hit the Grail Quest or the Battle of Camlann without having built your own personal histories to be invested in when the rise of Mordred and fall of Camelot brushes everything away into the stuff of myth.

As one of the first fruits of Chaosium’s new stewardship of the grand old game, The Book of Sires is an important and useful addition to 5th Edition Pendragon; as far as that game’s supplements go, I would put this on the same level of importance as The Book of Knights and Ladies, the supplement which allows for generation of knights from beyond Salisbury. If this is the quality we can expect out of future Pendragon releases, then rejoice. Greg Stafford has left us, and is doubtless refereeing a Pendragon campaign in Avalon for Arthur, Morgan, Nimue and the other Ladies of Avalon (and is doubtless being very careful about his answers when Morgan queries the role of women in the game); meanwhile in the mortal realms, the game remains in safe hands.