After a bit of a delay – I am fairly sure it was originally intended to come out much closer to Erebor – we finally have The Laughter of Dragons for The One Ring. Just as Erebor gave a deeper look to the region around Dale and the Lonely Mountain, The Laughter of Dragons offers a set of adventures tied into the area; in this respect, this is consistent with the overall approach Cubicle 7 have taken with the game. 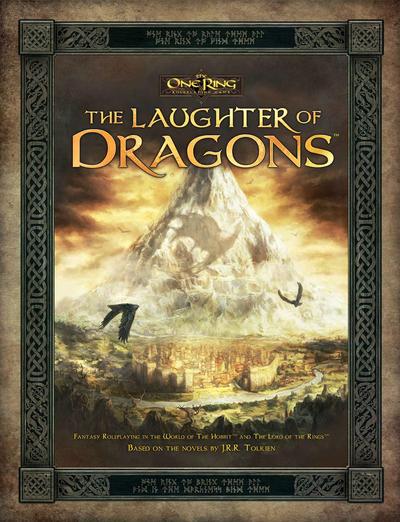 Those whose Tolkien passions were enough to take them into the appendices at the end of Return of the King and other such bits of ancillary canon will know that the area is not just the place where The Hobbit reached its grim climax, but also a place of high strategic importance to the War of the Ring. Gandalf aided Thorin’s party in their campaign against Smaug not merely out of friendship, but also because Smaug had to go: had he still been in charge at the Lonely Mountain when Sauron made his big move, he’d have been only too happy to side with Mordor, and call his relatives from the North to bring Draconic fury down on the heads of Gondor and their allies.

As narrated at the Council of Elrond in Fellowship of the Ring, that ain’t what happened: when a Nâzgul emissary goes north to Erebor he finds not a friendly dragon up for a bit of ultraviolence for the sake of First Age nostalgia, but a hardy kingdom of dwarves, allied to a similarly thriving kingdom of humans, who smelled the evil on Sauron’s ambassador and sent him packing.

The Laughter of Dragons essentially asks “What was Sauron’s plan B as far as Erebor went?” It’s a deft identification of a gap in the canon which can be used to tell a story and which The One Ring PCs can believably play a significant role in. So far as I can tell, Tolkien didn’t have any developed idea of how Sauron would respond to the death of Smaug – perhaps smugly assuming that the dwarves would be suckers for rings of power this time around, like they were back in the Second Age. The campaign here involves dark conspiracies and apparently-unconnected incidents which all culminate in a plot by Sauron’s agents to undermine Dale and Erebor alike, making them soft targets for subversion or (should that fail) attack.

It’s all up to the usual One Ring standards, and if you don’t like the overarching plot all but the last adventure (which is the one that ties the others together) make fine standalone stories. One thing I want to highlight is how the campaign makes use of Gandalf. Gandalf is such a major NPC for Middle Earth purposes that his use in a One Ring campaign demands care.

On the one hand, you can’t have Gandalf popping up all the time, for essentially the same reason as Tolkien had to separate Gandalf from the party in Moria; if Gandalf is around, anyone remotely sensible and/or virtuous is going to look to Gandalf for guidance or leadership on every single decision, and you need to have the PCs making their own choices. On the other hand, “agents of Gandalf helping him make his preparations for the War of the Ring” is a perfectly cromulent concept for a One Ring campaign, and even if the PC party doesn’t have Gandalf for a patron, some may be disappointed if the party never encounters Gandalf, no matter how much it would make sense for Gandalf to take an interest in a matter.

Essentially, Gandalf showing up in a One Ring campaign should be partly a treat for the PCs – a sign that they’ve accomplished enough to be worth the old stormcrow’s time – and partly a flag to indicate that the PCs are entangled in some Really Important Shit. This is more or less as he is used here. The big challenge, I think, is for the referee in terms of roleplaying Gandalf – especially since both the movies and the superior BBC radio adaptations offer such strong examples.

In terms of book characters, a more active part is played by Balin – a key dwarf of Erebor and a good buddy to the people of Dale. For my part, I like how the campaign uses him, and I suspect most people interested in playing a One Ring campaign would mildly squee at the prospect of meeting one of the party members from The Hobbit.

The region involved here, as well as having had a deep dive offered in Erebor, was also the subject of adventures in Tales From Wilderland, and one adventure here is essentially a sequel to one of the adventures in there; it can be played without running its predecessor, but is enriched if you have run the earlier adventure, since the outcome of that changes some of the features of this one.

On the whole, The Laughter of Dragons was worth waiting for, and I look forward to where Cubicle 7 go next. (I’m hoping that promised Moria boxed set is coming soon…)