Over the last year or two, the 5th Edition of Vampire: the Masquerade has been embroiled in controversy – to the point where it literally caused an international incident and caused Paradox to step in and shut down their new version of White Wolf, reducing its functions to merely overseeing the IP and rubber-stamping the work of licensees, rather than being allowed to develop anything in-house. (Much like it was under CCP, in other words, except with the recent announcement of Bloodlines 2 it’ll hopefully be more productive on the videogame front.)

Meanwhile, quietly and humbly, Vampire: the Requiem 2nd Edition has been chugging along doing its own little thing. For those who, like me, can’t be bothered to dip into V5 at this point – oh, some of its system ideas sound fun, but ultimately I feel like its release has been so shaky that I’d rather wait for the inevitable V6 or V5.5 that’ll correct the ship, and I’m much more interested in the metaplot-agnostic version of the setting which V20 offered than the highly metaplot-focused presentation V5 has enjoyed so far. Let’s take a look at a couple of recent offerings in that vein.

Guide To the Night 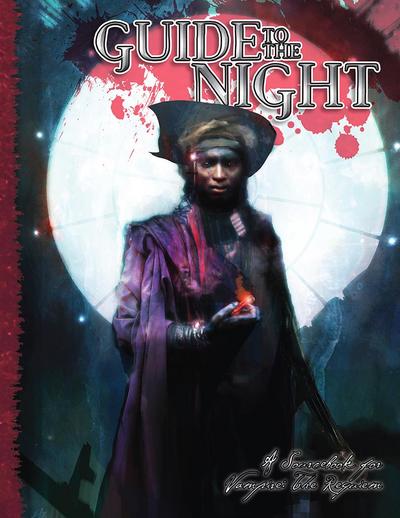 This is a bit of a hacker’s guide to Vampire: the Requiem, taking apart both the themes of the game and how it’s put together and taking you through the process of thinking through the underlying principles of your home campaign. As much as it tries to present itself as a coherently packaged and thematically-connected set of tools, really what it is is just a grab-bag of cool little system bits joined at the hip with some genuinely thought-provoking discussion of the process of cooking up a campaign.

For instance, you have some examples of highly alternate campaign settings for Requiem, reframing it for worlds very different from the core book’s “it’s IRL only with monsters” assumptions, you have suggestions as to what sort of questions you want to think about when coming up with NPCs in particular niches in a campaign, you have a reframing of some of the core book character generation tools to focus less on individual PCs and more to encourage development of the coterie itself, you have the esoteric idea of a “colony” – a group of vampires who have become so close that their Beasts have effectively synchronised to act as one, creating a strange sort of intimacy between them, you have discussions of how it affects a city should a particular clan or covenant gain the upper hand, you have ideas of stock characters hailing from the various covenants, you have suggestions for NPC coteries who might show up, you have extra merits and yet another social combat-y system and so on and so forth.

Implementing the entire thing would both be a headache and is actually impossible – after all, some of the alternate worlds in here are mutually exclusive. But taking it as a pit of ideas to dive into and grab what you want out of it is much more productive. I could see myself flipping through this when preparing to run some Requiem just for the campaign-running advice – a true rarity for a White Wolf/Onyx Path book, but even should you not agree with the particular views on how to run a game offered here, the text does a great job of getting your mental gears whirring and helping you think about what you do think about how to run the game, and the rundowns of things to think about in developing your campaign are genuinely helpful. 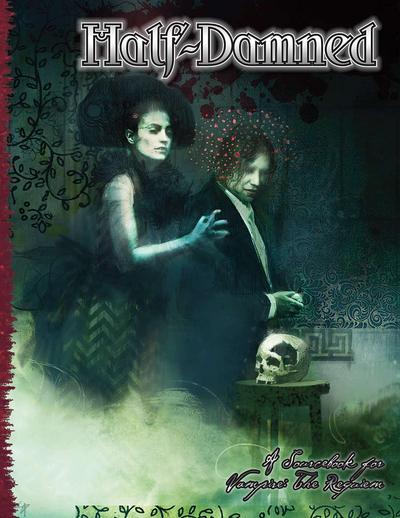 This is a supplement that gives a deep dive into three somewhat different types of entity who all have something in common: each of them exists somewhere in the hazy borderland between human and vampire, by-products (intentional or otherwise) of vampiric activities and society.

Such concepts have been part of Vampire since the 1st edition of Masquerade, of course, in the form of ghouls (humans who are addicted to vampire blood and become servants of the vampires that feed them); to this, Requiem adds its takes on dhampir (the offspring of vampires and humans – in other words, it’s the option which lets you do Blade) and revenants – those who rose from death after being drained by a vampire but who were not given a proper Embrace, who desperately seek ascension to full vampire status either through being Embraced or via diablerie, the consumption of a vampire’s very soul through the blood.

The book offers additional system support and distinctive features for each of these, but concentrates way more on giving deep treatments of the conditions in question. These are at their best when they take the axiomatic facts of what it is to be a ghoul, revenant, or dhampir and provide suggestions on what the implications of that are in vampiric society. It’s less successful when it assumes that all of vampiric society adopts a particular very specific set of slang or other attitudes around the subject. After all, part of the point of Requiem is that the societies of different cities and so on are extremely divergent and the idea of a consistent worldwide vampire culture is much less of a thing than in Masquerade. For instance, declaring that ghouls in general use a version of 1960s London’s gay polari slang is absurd, as is the idea that there’s a widespread bit of slang across vampire society for a particular living arrangement which is based on a Third Rock From the Sun reference.

Still, as a resource to draw on and cherry-pick from in the process of cooking up your own personal take on the subject matter, it’s pretty good. If ghouls, dhampirs, and revenants are no more than background flavour in your campaign, it might not be of much to you, but if any such characters become of even minor significance a quick skim here can help you add depth to their portrayal, and if they become major plot elements it’s worth taking a deep dive in Half-Damned.