A while back I got the opportunity to pick up at a reasonable price a nice copy of Deluxe Traveller. This was a version of the core Traveller rules that GDW published (and gave Games Workshop the rights to release in the UK) in 1981, once Traveller really started getting hot. It comprised the three core booklets of Classic Traveller in their 1981 revisions, a couple of dice, and Book 0 – a beginner’s guide to the game which, as I’ve outlined previously, might be the single most detailed introduction to the hobby written with a view to explaining it to outsiders that existed at that point. (Basic Dungeons & Dragons did exist at this point, but that of course was replete with system stuff – Book 0 is, in effect, a system-free multi-part essay.) 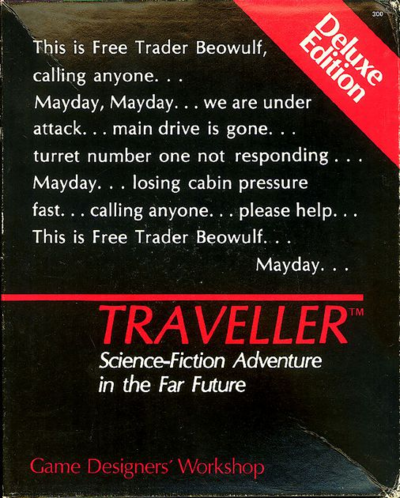 And on top of that, Deluxe Traveller gives you a colour map of the Spinward Marches – later bundled into the MegaTraveller core box – and The Imperial Fringe. This is billed as an introductory adventure but, aside from an introductory encounter, there isn’t much adventure to it – it covers the PCs starting out their post-mustering out careers as Traveller adventurers and getting recruited by the Imperial Scout Service – giving them an opportunity to earn a very welcome extra chunk of cash if they spend a day or so surveying the systems they visit so that the central Scout database can be updated accordingly.

This was penned by Marc Miller in a conscious attempt to provide a beginner-friendly introduction to refereeing a Traveller adventure, and the advice and suggestions he throws in here are therefore of great interest. Much like Gary Gygax’s refereeing advice in Keep On the Borderlands gives us an insight into how Gygax expected D&D would be played by a home group (as opposed to the convention contexts that most of his other published adventures were written for), The Imperial Fringe offers an insight into how Miller expected people to actually use Traveller – right down to bits like fudging the mustering out rolls to avoid a situation where none of the party members starts off the game with a starship. (Whilst “roving space bums without a ship of their own” – or “frontier settlers establishing a new community on a specific planet”, for that matter – are both excellent and entirely viable concepts for Traveller campaigns, the classic “party with their own ship flying about and trading” is both the original assumed basis of campaigning and the premise which lets you get most use out of the core three booklets.) 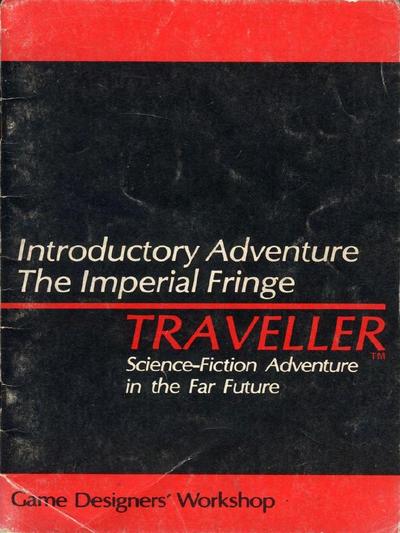 In fact, this is what The Imperial Fringe does very well – provide not a simple, small, self-contained adventure, but a premise and a framework to nudge the player characters into exploring as much of the Spinward Marches as possible. The idea of a campaign framework as a thing with value in and of itself – a thing as worthy of working on and developing as much as an individual scenario – is not so new these days and has gained common currency; such frameworks formed several of the stretch goals on the Unknown Armies 3rd Edition Kickstarter. The Imperial Fringe, however, is the first example I can think of of such a thing developed as its own distinct product. (If you squint a sort of campaign framework is suggested by the core rules of OD&D – but this is a substantially more specific one than the implied campaign structure of Dungeons & Dragons.) It’s another small way in which Traveller was a truly groundbreaking game in its time.

One thought on “Did Traveller Invent the “Campaign Framework”?”