To follow up on my Kickstopper article about the 3rd Edition Unknown Armies crowdfunding project, I thought I’d offer three braces of mini-reviews of the various Unknown Armies supplements that got offered up as PDFs in the Bundle of Holding a while back; since Bundles get rerun from time to time, I thought this might help someone who missed out on the Bundle originally decide whether to jump in if it pops up again. 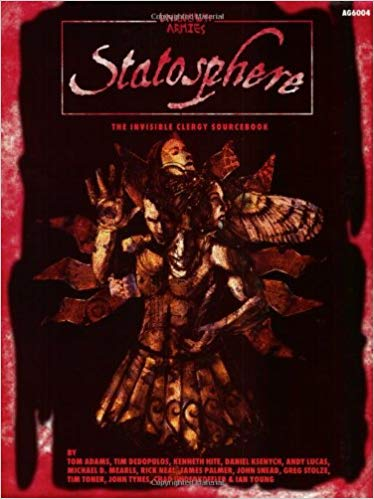 The definitive sourcebook on the titular subject, covering the Comte St.-Germain (wisely not choosing a definitive canonical identity for him but giving individual referees a choice between options), the Invisible Clergy, Avatars and Archetypes, Tilts, and the House of Renunciation.

A good cross-section of this material ended up in the 2nd edition core rulebook, mind you, but the additional depth and expanded explanations here remain extremely helpful. 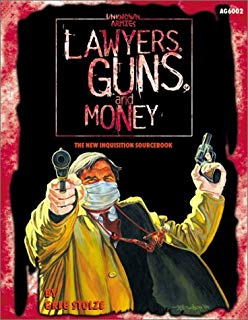 This is the definitive writeup on the New Inquisition – at least, as it exists at around 2000. For present-day games you may want to consider how the passage of time has changed the clique, but even then the book is still useful from the point of view of implementing this high-tech corporate psychic Mafia whether as NPC foes or as patrons for sufficiently ruthless player characters. 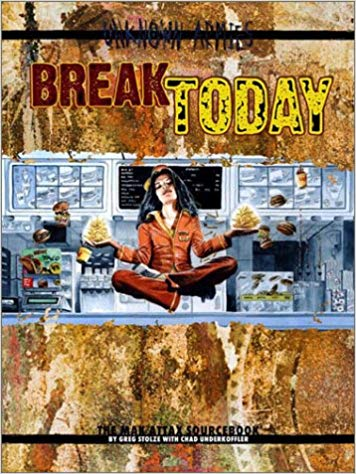 Mak Attax – the benign conspiracy to introduce a bit of magic into everyone’s life that works through McDonald’s cashiers and fry cooks – is perhaps one of the more Marmitey aspects of the Unknown Armies setting: they didn’t work so hot for me until I had the brainwave of mashing them up with Juggalos for an extra dose of weird.

Still, Break Today does an excellent job of fleshing them out, taking what in the core had come across as a weird joke and making them feel like a viable thing to hang a campaign on. The delicious sprinkling of new Adept and Avatar magics certainly doesn’t hurt. 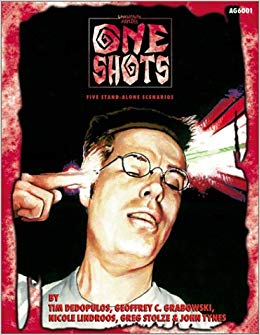 Jailbreak by Greg Stolze is one of many experiments he’s done over the years of having player characters as competitors instead of allies. It works nicely here because as a one-off scenario there’s no need for the session’s outcome to involve a viable PC party gelling together. The situation presented is simple, dramatic, and extremely open to player choice when it comes to how it resolves.

Strange Days by Tim Dedopulos is an investigative scenario stuffed with red herrings, culminating in a bait-and-switch, and whose conclusion depends on the PCs deciding to go to a particular out-of-the-way place at a particular time. In short, not great. It also relies on the PCs being reasonably clued-in about the occult underground and ideally having some occultists among them, which is suboptimal for a one-shot which doesn’t provide, along with the pregenerated PCs, any sort of convenient summary of what their powers do.

Joy and Sorrow by Nicole Lindroos and John Tynes mashes up a heavy-handed (and needlessly edgy) allegory with an equally heavy-handed moral dilemma, which precisely due to its contrived and supernatural nature doesn’t really seem like much of a dilemma. (Philosophers – actual cutting-edge ones – have tended to shy away from such things of late, having come to the conclusion that they don’t really tell us much except that in situations radically disconnected from reality, we don’t really have much of a consistent moral compass.) The central idea is better implemented in 3rd edition’s setting book.

Fly to Heaven by Greg Stolze really doesn’t work in the wake of 9/11: in a world where the Twin Towers fell, no way would the antagonist’s far more modest plan here let him take the role of the Terrorist in the Invisible Clergy.

And I Feel Fine by Geoffrey C. Grabowski almost entirely fails to engage with the Unknown Armies cosmology or system (numerous instances screaming out for Madness Meter rolls go uncommented-on), and largely reads like a generic adventure skinned for Unknown Armies at the last minute. It also involves masses of really blatant, ham-fisted railroading. 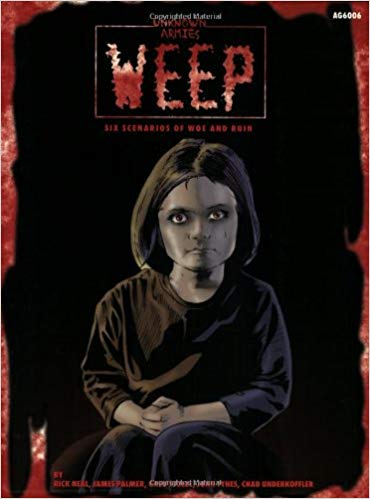 This is another adventure collection, the main difference between this and One Shots being that these adventures are a bit more amenable to being woven into ongoing campaigns.

A Few of My Favorite Things by John Tynes is goofy, ridiculous, railroady nonsense with no real point to it. There is nothing for the PCs to do beyond endure this arbitrary bullshit until it stops. It’s awful, pretentious nonsense and I want to spray Tynes with a hose until he says sorry for inflicting it on the world.

Swap Meet by Rick Neal is not so much a self-contained adventure as it’s a diversion you can work into your own campaign. The titular swap meet is an assembly of Avatars of the Merchant, plus anyone else in the Occult Underground with the persistence and skills to find out its location, where potentially anything can be bought and sold – and in any particular campaign the PCs are likely going to have things they badly want to get their hands on (or get rid of). Neal, unlike so many scenario authors, overtly encourages referees to strip mine the scenario for material that works for their campaign – even if that’s just a single scene or NPC – and junk the rest if it doesn’t work, and the result is a decidedly useful little toolbox.

Drink to That by Greg Stolze has a nice format but a shitty ending. In terms of the format, it isn’t a traditional adventure so much as it is a series of incidents that can come up quite naturally over the course of whatever else is going on in your campaign, building up to a climactic event. The problem is that event either results in everything fizzling away anticlimactically, or the PCs having a fat wanky dose of metaplot sprayed at them. Neither is satisfying.

The Green Glass Grail by Chad Underkoffler finds Chad trying to stuff as many “canon” events into the scenario as possible and also indulging the infuriating habit of assuming you have all the other Unknown Armies supplements and referring to them frequently. It might be good if your favourite bit of Unknown Armies is the canonical set of NPCs and conspiracies, but fiddling around with those seems a damned unimaginative way to run the game to me.

Stoon Lake by Greg Stolze is an entirely non-supernatural mystery that looks like a supernatural one. That’s a decent idea in theory, but in execution there’s a lot of self-indulgent wallowing in a soap opera backstory that I suspect many players simply will not give a shit about.

Garden Full of Weeds by James Palmer is full-on misery tourism in what is literally and cosmologically a sick caricature of a deprived urban area in the US. On the one hand, it is good for an RPG to confront this sort of stuff, but on the other hand the entire setup automatically assumes that the local residents have no capability to investigate this nasty sheet and that the PCs are one form or another of privileged saviours coming in from outside to solve a problem that the locals can’t even perceive. Moreover, the sheer excess of the story risks perpetuating a Candyman-esque demonisation of poor communities. 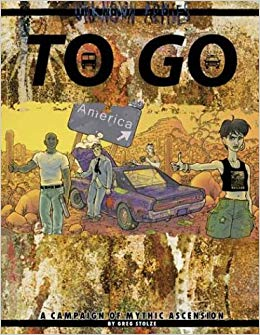 This is basically an Unknown Armies take on Dragon Ball – there’s seven mystical tokens to collect across the States, so off we go on a road trip to collect them. Unlike in Dragon Ball, you don’t need all the tokens to get the big prize of Ascension, which means that as written the outcome of the campaign can become largely set in stone at the halfway point if the PCs have done a truly bang-up job: once they get their chosen candidate four of the available McGuffins then the sensible thing to do is hole up and ignore the rest of the adventure and coast to a victory on points (and that’s assuming you don’t stiff them on the dice and prevent them from pre-emptively icing the rival candidates).

Moreover, the campaign boils down to the PCs being asked to choose which NPC they like best, and generally assumes they will be trying to back one of those NPCs. Was one of the player characters hoping to Ascend? Well, fuck you buddy – the campaign seems to almost deliberately overlook the option, Greg falling into the trap of assuming that his beloved NPCs are necessarily going to be more interesting than the PCs. Nor is any consideration given to the possibility that the PCs might try to stop everyone from Ascending. Lastly, big metaphysical sledgehammers are deployed to ensure that the episodes unfold more or less in order.

Amazingly, this won Ennies, which only serves to convince me that the taste of Ennies voters and mine are radically incompatible. (I suspect they may have voted on the basis of it being a wild read, as opposed to actually being a solid adventure.) If you want a big linear metaplot-heavy Unknown Armies adventure path, here it is – choke it down. If, like me, you think that sounds like the worst possible use of the system, then congratulations.

2 thoughts on “Bundle of Armies”