So a while back I managed to get my hand on a few pre-5th Edition Pendragon bits and pieces, and I could have sworn I’d reviewed them here but I hadn’t, so here’s my quick thoughts on them. 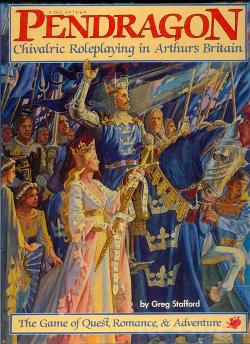 First up was a nice boxed set of 1st Edition Pendragon. Interesting in part as a historical item, it’s notable just how much of the structure of the game was in place right there from the start – in particular, the revolutionary personality trait and passion system was right there. 5th Edition is a bit more focused in the way the core book assumes that your homeland is Salisbury, which is sensible for making characters for the Great Pendragon Campaign framework because that’s at the heart of the action at the start of that, but this box was designed before that framework was in place and so offers character gen for knights from a range of homelands.

Whilst Stafford does note that the presence of female knights is, by default, assumed to be not a thing, he does point out that this is largely an upshot of the original troubadours writing to the social norms of their time, and that as residents of modern times we have the capacity both to work in our own ideas and draw on concepts and traditions of warrior women that the original troubadours might not have had access to. The set is also nicely rounded out with a poster map of Arthurian Britain, which will enhance play with any edition of the game. 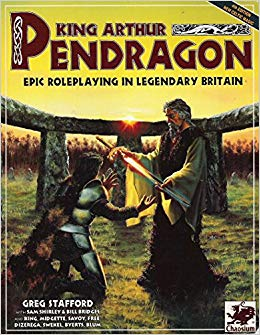 The 4th Edition of the game is a big fat book and, unfortunately, lacks the focus of other editions. A desire to broaden the game opens up a range of non-knightly character generation options, including magicians, whereas I’m of the view that magic is not really a tool for PCs to use in a reliable, repeatable way in a Pendragon game – rather, it should be an environmental factor encountered in adventures, something outside of the PCs’ control and common experience most of the time which spices things up whenever it appears. In general, this dilution of Stafford’s original concept is unwelcome. 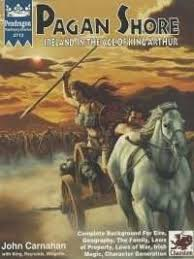 That said, 4th Edition did have some interesting supplements, such as Pagan Shore – a treatment of Ireland sufficiently definitive that the 5th Edition Great Pendragon Campaign actually recommends you consult it if the PCs go there. Penned by John Carnahan, it offers a view of a world derived from Irish mythology mashed up with an invasion from across the Irish Sea inspired in part by Henry II’s campaigns, offering the sort of mashup of history and mythology which has been part of the whole Arthurian deal ever since Geoffrey of Monmouth did his thing.