So the new regime at Chaosium are still purging their storage space of old product which was stacked up under Charlie Krank’s watch. (For a full breakdown of how Chaosium’s leadership has changed, who Charlie Krank was, and why it’s probably kind of a good thing that Charlie’s no longer running Chaosium, see the first part of my overview of the Call of Cthulhu 7th Edition Kickstarter.) The upshot of this is that sometimes when you’re purchasing from their website – say, to get your shiny hardcover copy of the brand new edition of RuneQuest – you’ll notice that they’re selling, say, back catalogue items from their fiction line for less than $5 a pop. 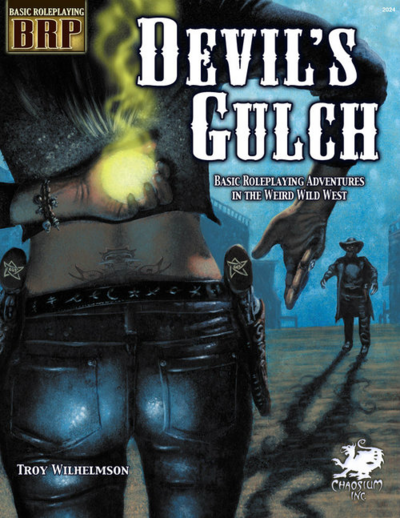 Thus, when I got my RuneQuest I also bought a bunch of old Chaosium products I’d semi-had my eye on which were going for a reasonable rate. Devil’s Gulch was not discounted, but it did jump out at me since it’s meant to offer a complete Western town with an eye to using it with the generic Basic Roleplaying Big Yellow Book system for Weird West, Deadlands-style adventures. Obviously, this is a product which may well have useful synergy with, say, Down Darker Trails, but whereas that product showed professional, modern production values and a thoughtful take on its subject matter which was well worth the praise it won, Devil’s Gulch is… not.

Perhaps the best way to describe Devil’s Gulch is “a BRP monograph which got promoted to a full product”. For those who don’t remember my previous article on Chaosium’s monograph project, a quick reminder: monographs, under the Charlie Krank regime, were products written and submitted by fans, who were exclusively responsible for the editing and layout of the products in question. Written solely by Troy Wilhelmson, according to the credits page Chaosium actually had a full team that worked on this one, including Meghan McLean who did most of the layout for the last seven years or so of the Krank regime, but frankly I do not think most of the people involved in their project did their best work (or if they did, yikes).

The cover art has this dismaying focus on a shapely butt (come on, folks, have some class) which also reveals a decidedly anachronistic lower back tattoo, but it’s honestly the best-executed aspect of the presentation. The interior art consists largely of cartoonish sketches, which are increasingly sketch-like whenever they have to depict something more complex than a single character. The layout just feels sloppy, to an “I can literally produce something more readable by myself in Google Docs” extent – and I’m not trying to denigrate the often-overlooked difficulties of the layout artist’s work here, it’s just clearly and obviously nasty to look at.

Perhaps my biggest annoyance on the layout front is the honking great DEVIL’ S GULCH text at the top of each page, which is literally the only header the pages have aside from a little divider symbol towards the central divide. Transparently an attempt to eat up page space, I point-blank refuse to believe that it was intended that this was the actual header: I greatly suspect that McLean did it as a placeholder for some proper header artwork that never showed up. In general, it feels like Krank people to just do a rough first draft on each of their respective tasks and then ran with that, rather than allowing the product a proper development process.

As for the content itself, it’s frankly uninspiring. Devil’s Gulch is about as cliched a Western town as you’re ever likely to find. Sheriff, nice old lady who bakes pies, sexy lady who’s a prostitute, doddery but competent town doctor, kooky old undertaker? This mass of overwhelmingly white NPCs (people of colour are largely represented by Native Americans of a fairly shallow, stereotypical depiction and that’s it) are all stock characters from the Western canon which anyone who’s had even a glancing encounter with the genre could improvise perfectly well for themselves.

Many NPCs are offered in an “Old West” and “Weird West” variant, the latter of which generally involves various flavours of pulp nonsense that don’t come together in any thematically compelling way. Unlike Down Darker Trails, Devil’s Gulch does not tell me anything I didn’t already know about the Old West, or inspire me to use its material in a game, or even offers a distinctive or coherent vision as to what the town is actually like and what you are supposed to do with it; the bifurcated Old West/Weird West description just feels like a means of padding out the book (which is already pretty thin by RPG supplement standards), or a sign that Wilhemlson didn’t actually have a clear idea as to what he wanted to do with it beyond the most generic possible “Eh, I guess I’ll write a Western supplement” concept.

Though embraced by the Krank regime, I can’t see a product like Devil’s Gulch coming out under the new regime at Chaosium – not without substantial additional polishing, at any rate, since the Moon Design guys who now run the place understand that gaming products driven by a distinctive, vivid, and clearly communicated personal vision are going to draw more attention and succeed better in a crowded market than generic dross – and Devil’s Gulch is very much generic dross.