One beneficial side effect of Sandy Petersen and Greg Stafford stepping in to take direct control of Chaosium and put a new regime in place (spearheaded by the Moon Design Publications crew) is that it allowed the new regime to work closely with the creators of Chaosium’s most beloved setting (Stafford and Glorantha) and RPG (Petersen with Call of Cthulhu). On the Stafford side of things, it enabled them to produce a shiny new edition of RuneQuest that’s truer to Stafford’s vision than any preceding edition (having incorporated concepts developed in his home campaign and Pendragon in quite an artful manner), and it’s nice that they were able to do this before Stafford’s unexpected passing.

On the Petersen side, his takeover took place a bit late in the day for him to have much direct role in the new edition of Call of Cthulhu – Mike Mason and Paul Ficker had largely done the job already and the old regime at Chaosium had got up to the point of working on the layout and preparing for printing before they fell over and died. Moreover, the new edition is pretty dang good and doesn’t really need that much of a tweak in the first place, and Petersen has Petersen Games and Cthulhu Wars to manage as well, so one can’t necessarily expect to him to just dive in and start writing masses of material for the game again. 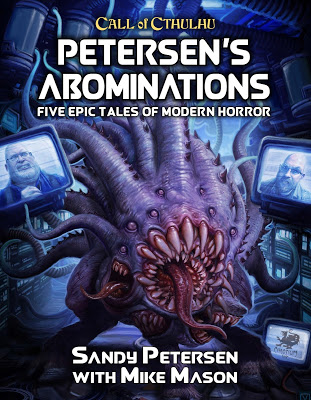 No, I’d say the first really big fruit of Petersen’s new closer involvement with nu-Chaosium is Petersen’s Abominations, which is a set of five modern-day scenarios based on scenarios devised by Petersen for convention play.

I say “based on” there deliberately because, as they set it out in their introduction, Sandy the muse and his interpreter Mike Mason went about making this book in a very particular way. Petersen is apparently not one to actually overdevelop his Cthulhu scenarios, at least not those which he prepares for convention play, since his notes for all of these were apparently very sparse and fragmentary. (This is a point of good refereeing in general: if you overprepare you create a temptation for yourself to be too beholden to your notes, because otherwise you’ve wasted the work which went into preparing them, which can lead into such errors as insisting on people getting precisely the right clue to progress in the adventure.)

Lacking time to write them up in full himself, Petersen therefore sent his notes and had a series of long Skype calls with Mike Mason, who interrogated Petersen to get information on how the scenarios are expected to flow in practice and what to do if the PCs take particular routes and how it tends to go in play. What you have here, then, is not raw, unfiltered Petersen, so much as it’s Petersen’s scenario concepts and ideas interpreted and set into a well-organised and easy to understand presentation by Mike Mason.

Though the content of the scenarios are a bit variable, the actual presentation and framework as put together by Mason is actually very good, carefully making sure to acquaint the Keeper with the major characters and locations in each scenario before plotting out an expected sequence of events. Most importantly, Mason and Petersen don’t overbake that sequence of events – since, after all, it’s the aspect of any game scenario which must be amenable to being entirely derailed or redirected by player action. Most of the scenarios are sandbox-type situations, albeit sandboxes of varying sizes, rather than working to a strict script.

As Petersen explains, the origin of these scenarios as convention one-shots means that they share some qualities. The first is that they all have a set of pregenerated characters with them and are intended to be played all in one go, though most of them can be expanded for longer play fairly easily. The second is that they tend to be quite fatal, both because there’s no need in a one-shot to keep people’s PCs alive for next session and because apparently people really enjoy being able to say “I got killed by the guy who created Call of Cthulhu!” after playing these convention games so Petersen feels obliged to lean into that by giving them really memorable and gruesome deaths.

Let’s see how this works out in practice. Hotel Hell is literally Lucio Fulci’s The Beyond adapted to a tabletop scenario. Not in terms of following the plot points of The Beyond strictly, mind – in fact, it’s a bit of a sandbox scenario, with a whole plethora of directions play can go in supported, and there are a few differences (the locale is shifted to British Columbia for extra isolation, and apocalyptic news stories provide a fun background). But the premise, the backstory, the hordes of the dead, and especially the aesthetic of the hellish otherworld are direct lifts from Fulci.

It’s open and brazen about this and on the whole it’s rather glorious in how it’s able to provide this open (if claustrophobic) sandbox in which the referee can let their inner Fulci run wild. It certainly reads like a scenario where applying Fulci’s “throw horrible incidents at them and cram in a lot of dream logic and see what sticks” approach would work quite well.

The Derelict – also released by itself as a Free RPG Day offering – I didn’t like. My reasons for disliking it roughly parallel the reasons Shimmin didn’t like it. I think a lot of the issues Shimmin noted with it (slightly railroady beginning combined with there being little hope of the investigators actually surviving) are way more understandable when you realise that it’s a one-shot designed for cons along the lines Petersen enunciates in his introduction, but at the same time I am not convinced it’s a particularly fun example of the “people are picked off one by one by a monster on an isolated ship” subgenre.

Nor am I convinced that said subgenre is especially satisfying in a tabletop RPG format. Generally, tabletop RPGs are played as a group, picking PCs off one at a time means people increasingly have nothing to do during the game except sit on the sidelines making snarkly comments. This is less of an issue at a con where people who die early can just go “lol, thanks Sandy” and wander off to enjoy the rest of the con.

Panacea is much better – “investigation into sinister drug company” stories aren’t uncommon, and as a result they kind of hinge on the revelation being exciting enough to justify the slightly clichéd premise, and boy golly is that the case here. There’s also a sidebar on the subject of the Tcho-Tcho encouraging an interpretation of them where Tcho-Tcho status is less an ethnicity and more a signifier of Mythos manipulation of an inbred bloodline, and can come up within any ethnicity in any geographical region whatsoever – so the cannibalistic de la Poers of The Rats In the Walls, for instance, might be just as much Tcho-Tcho as the Burmese tribes of the original rather racist August Derleth stories that introduced the concept.

This in one fell swoop resolves an awful lot of my problems with the Tcho-Tcho trope: if it’s a state of being imposed by an external force rather than a conventional ethnicity, that takes it away from the “intrinsically evil ethnic group” trope which thoughtless designers and writers needlessly regurgitate when they use the Tcho-Tcho. Moreover, if the Tcho-Tcho taint is something “gifted” to particular worshippers by the Old Ones, and then kept within the family by a tendency to isolation and inbreeding, that makes them a sort of gruesome aristocracy perpetuating a sort of sick divine birthright – in other words, their attempts to perpetuate these alien traits through the years in itself can be read as a vile form of eugenic elitism or an attempt at so-called “racial purity”.

It’s also got one of the most original uses of a Dark Young of Shub-Niggurath I’ve ever seen in a Call of Cthulhu scenario; these are usually deployed as generic tree monsters in scenarios, so I found it really nice to see a very imaginative use of it. Petersen’s example is one very much worth following when it comes to taking existing concepts in the game and then cramming them into bizarre, unexpected contexts in ways which end up making a disturbing sort of sense when viewed from a sufficiently inhuman perspective.

Mohole is a setpiece set on an oil rig with a vividly described cast of NPCs and a plot that’s consciously a mashup of various Quatermass and Jon Pertwee-era Doctor Who plots, and if you’re going to plunder BBC sci-fi drama for your Call of Cthulhu ideas there’s few better places to go.

Finally, Voice On the Phone is set among predominantly Hispanic gangs in Dallas, Texas, with a gruesome manipulator playing them off against each other. The subject matter is uncomfortable. It’s useful to broaden the range of character types and social settings to explore in the game, of course, and it would be a self-serving denial of uncomfortable realities to pretend that ethnicity is not a major factor in gang culture in the United States; at the same time, some groups may feel that they can’t quite do the themes at hand justice, or feel ill at ease with a module which primarily casts Latin or Hispanic individuals as criminals, though it would certainly be easy enough to change the latter.

On the whole, Petersen’s Abominations has more hits than misses, and whilst all the modules clearly exist within the constraints Petersen outlines in his introduction, at the same time they also feel sufficiently diverse in their approach that none of them feels outright redundant next to the others.