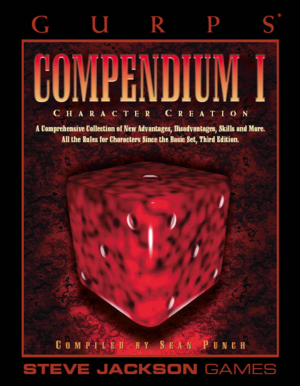 Over the course of that process it was inevitable that there was a certain amount of overlap between the supplements – new character generation options and new rules which, after being introduced in one supplement, turned out to be of broad enough use that other supplements ended up reproducing them (or reinventing the wheel by producing similar but very slightly different rules or options that did more or less the same thing – though by and large Steve Jackson Games seem to have done a good job of avoiding that).

By the mid-1990s it got to the point where it made sense to consolidate all the material which kept appearing in supplement after supplement in one place, so that future supplements could concentrate on material which was well and truly only suitable for the specific genre or setting under discussion. This concept – the GURPS Compendium – ended up becoming two separate Compendia, since the final product turned out to simply be that large.

Compendium I: Character Creation has the material which in some ways is easiest to deploy in your campaign: sure, it’s got some alternate rules on attributes, which are sufficiently central to the system that if you muck about with those it has all sorts of knock-on effects, but by far the majority of its pages are dedicated to new Advantages, Disadvantages, and Skills. It’s easy enough to simply deploy these in your campaign straight away, although as always care should be given as to how many Skills you actually intend to make use of – an excess of granularity making it incredibly difficult to create a character who’s remotely competent.

Compendium II: Combat and Campaigns contains material which requires a bit more thought and consideration to deploy – alternate rules for combat, spot rules to use in very specific situations, and that sort of thing. I suspect it’s actually used much less than Compendium I in the wild; certainly, second-hand copies of Compendium I seem to have this tendency to be much more battered and play-worn than copies of Compendium II. 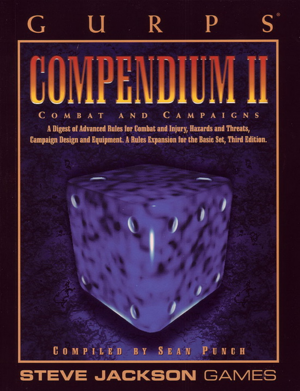 Both of these collections were compiled by Sean “Dr. Kromm” Punch, the line editor and “system guru” for GURPS, and it feels like the side-effects of his tenure there – and, to be fair, the overall crunch-heavy play culture that developed around GURPS – are most evident in Combat and Campaigns, some of the rules in which are incredibly finicky. Punch seems to have the philosophy that if people ask him a question about GURPS and how to resolve something in it, he should be able to give a definitive judgement on how to apply the rules there, and seems happy to have fussy little rules detailing how to cope with really obscure edge cases. I can’t help but think that GURPS would have evolved in a different direction post-3rd Edition had its line editor and system guru been the sort who was more willing to say “Look, I don’t see the need to set a precise rule for that situation, just eyeball it and come up with something riffing on the basic principles established in the Basic Set, because that level of confidence in your own judgement is an essential prerequisite to refereeing a traditional-format tabletop RPG anyway”.

In particular, I feel like folding most of the Compendium information into the Basic Set for 4th Edition was a massive mistake. It greatly put the lie to the idea that the Compendium material wasn’t really stuff you absolutely needed, and it turned the Basic Set from a book which was comprehensive enough to feel worth paying money for (despite the fundamental GURPS principles being free in GURPS Lite) but which doesn’t feel like a chore to digest and become conversant with into a massive two-volume monster. Advocates for GURPS tend to point out that a lot of the material in the 4th edition Basic Set is, as it was in 3rd edition and the Compendia, optional. What people taking this line have consistently failed to recognise is that selecting the options in the first place is, in and of itself, a barrier to play.

The selection of which options to deploy in your game is an essential stage to making your campaign fit the conventions of the genre it’s trying to fit into – the necessity of including essays on how to use GURPS for campaigns with more cinematic/narrative-logic based assumptions or how to cope with more high-powered campaigns in GURPS is proof of this. You could just skip it all and go just with the Basic Set or Lite rules every time, but then it’s going to feel exactly like the same dang game whatever setting you run in and whatever style of campaign you try to deliver, the Generic turning into Bland (and then you end up with a bad case of the BURPS).

Somehow, having the Compendium material in two entirely separate books from  the Baisc Set makes this process of deciding just how to deploy GURPS feel easier. It somehow feels more natural to say “we concentrate on just what’s in the Basic Set and we only crack open the Compendia in particular niche cases when we want something a bit more fleshed-out than a spot ruling” than to say “We’re ignoring entire swathes of the Basic Set so don’t even bother looking at those unless I tell you to”. Yes, you’d probably ignore its of the 3rd edition Basic Set even then, but you’ll still likely incorporate most of it, and it feels a bit more approachable to say “Here’s the core rulebook, most of it will be useful” than to say “Here’s the core rulebooks in two volumes, we’ll ignore almost all of the material in here.” If you find yourself in a spot where you are saying the latter, it feels like you got scammed when you bought those core books.

This is not the only thing which dismays me about the direction GURPS has taken in 4th edition. The shift from producing cheap and cheerful softcover sourcebooks for distinctive settings into producing expensive hardcovers that tend more towards broad subjects instead of offering the amazing range of settings that 3rd edition enjoyed is something I particularly dislike. Nonetheless, I think the fall of GURPS from being a flagship product to very much being second fiddle to Munchkin in part comes from the message sent by that monster of a core rules set. No amount of protesting about how much of it is optional really matters, because this is the sort of area where perception makes more difference than reality.

As far as those sticking with 3rd Edition go, I’d say the Compendia can be useful, but the character creation one is likely to be much more useful than the “Here’s a bunch of rules for surprisingly specific situations” volume.