I’ve never seen a campaign world that couldn’t benefit from a decent city supplement. Cities are great because they can both act as a nigh-endless source of local adventure and also be a place where player characters put down roots and develop relationships – which gives them something they want to defend. The latter is particularly important if you want to steer away from the “picaresque wandering in a search for glory” style of fantasy campaign (or the “murderhobo” style, to use a less kind name people have given it). 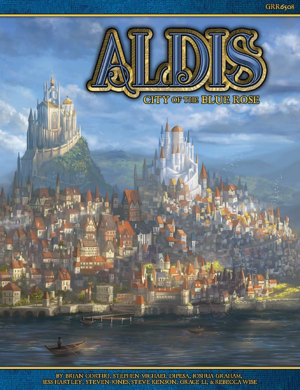 Blue Rose is, as the introduction to Aldis: City of the Blue Rose notes, rooted in a style of fantasy where it’s particularly important to have a home to go to and people to develop relationships with, because romantic fantasy needs people to romance, fall in love with, and seek to build lives together with – and somewhere to build that life.

In addition, I’d say that one of the nice things about Blue Rose‘s romantic fantasy setting is that it’s quite a decent “cleanbright” fantasy setting in its own right – it presents a world where the default starting nation of Aldis is, if not perfect, at least much more aligned with modern liberal values than more historically-rooted (or outright grimdark) settings are and presents a kingdom which people can feel good about defending. As I said in my original review, if you aren’t interested in the romantic side of the setting you don’t need to focus on it – it’s good for any RPG campaign where you want the campaign to be focused on community and relationships and the PCs defending their values and way of life against hostile forces.

Whatever you’re doing with Blue Rose, the city supplement Aldis: City of the Blue Rose is a decidedly solid addition to the game. The titular city gives its name to the setting’s main kingdom and is its capital, so this puts you right at the heart of the action, and the distinctive Blue Rose flavour is thick here – love it or hate it. This is a fantasy setting where there is a proper sewer system (complete with magically-operated sewage treatment plants!), street lighting, a progressive taxation system and decent standards of living and healthcare, which might bug people who insist on their fantasy settings feeling like real-world history.

On the other hand, all of those things have a carefully worked-out basis – and in a world where magic is as widely available as it is in Blue Rose, in a culture as public-spirited as Aldis’s (the book notes that if you want to get ahead in politics being a bit of a philanthropist is a big help), it makes sense that people would turn magic to provide the same sort of improvements to quality of life that we’ve obtained from technology in the real world.

This sort of thing does slightly play into the perception that Aldis is a fluffy utopia where there’s nothing for adventurers to go proactively accomplish – but if the core Blue Rose book didn’t put paid to that nation, Aldis certainly puts it to rest. As well as being stuffed to the gills with interesting locations and NPCs to encounter, it’s also sprinkled with heaped, generous servings of story ideas tied to all those places, giving you an idea of the sheer range of stories that can be told in a Blue Rose campaign.

On top of that, it’s actually got a bit more of a dose of realism than some renfaire fantasyland settings I’ve seen (looking at you, Terry Brooks). Actual farmland is depicted immediately outside the city, as well as little settlements built up outside the walls, and there’s references to farms extending substantially further away. (Apparently there’s farms at least a week’s travel away that use fertiliser derived from Aldis’ sewage treatment process.) The book also provides a quick overview of the rural areas surrounding Aldis, so you have adventures outside of town to enjoy as well as in-city adventures. Say what you like about the setting, at least it hasn’t forgotten that a city the size of Aldis needs a substantial amount of agriculture happening to sustain itself.

On the whole, Aldis is a supplement which is fantastic for Blue Rose, and which could potentially be dragged and dropped into a different campaign world if you particularly wanted to, though how viable that is would depend a lot on the underlying assumptions of the world in question. If you dig Blue Rose or really want another city supplement and don’t mind Blue Rose‘s subgenre differing in important respects from the conventions of other fantasy subgenres, it’s worth a look.