So my Roll20 group’s very long-running 5E Planescape campaign is over, which seems like a good time to have a look at my old Planescape material one last time and review it before we move on to our next game. (It’s going to be some Victorian-era Mage: the Awakening business.) I’ve previously looked over the core Planescape materials, so now it’s time to drill into the various supplements.

I would actually argue that the most useful supplements for a Planescape campaign are not, in fact, the legendary big fat boxed sets of planar information that followed the core boxed set. Of course they are useful for any extended visit to the planes in question – but equally, the planes in question a) have their basic principles already outlined in the core box, so you have all the tools you need to improvise your own locations and adventures there if you have to, b) are infinite, so you have little need to worry about your own inventions crowding out the “canon” material, and c) almost certainly aren’t the home base of the campaign, and therefore will be under correspondingly less of a microscope than that home base.

Odds are, if you’re playing Planescape your home base is going to be Sigil – and that’s why the trilogy of supplements giving further detail on the City of Doors is so useful for a Planescape campaign. If your characters are regularly spending time there, then your players are correspondingly going to be giving it much closer scrutiny, and therefore the more help you have in making it feel like a rich, real location with actual people with actual agendas living in it, the better off you are.

In the Cage: a Guide to Sigil 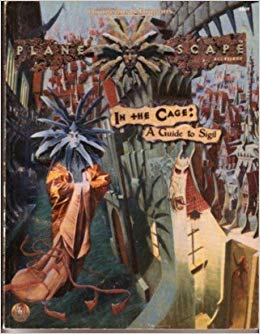 Its title comes from an old Genesis song; its subtitle explains what it is perfectly. This is an absolutely stuffed-to-the-gills, information-dense sourcebook on Sigil. No time is wasted on any sort of introduction or prefacing guidance on how to use this stuff in-game, to a large extent because the guide to Sigil in the core box already covers the sort of stuff an introduction would have covered; instead, the book leaps straight into the action, offering a tidal wave of locations (many of which have associated maps), significant NPCs, bits of trivia and information about life in Sigil, in-character advertisements, flyers, and declarations and more besides. There’s some especially useful notes on where to find the most well-known portals to particular planes too.

If you like Sigil and the Planescape house style – and you probably aren’t even thinking about Planescape supplements if you don’t – this is gold. Any Planescape campaign which includes any significant adventuring in Sigil would be enriched by this book, and since 99% of Planescape campaigns qualify as that this makes it near-essential. 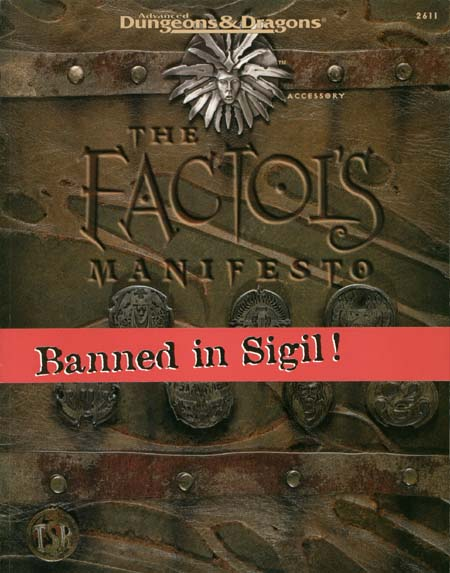 Where In the Cage provided a simple enough breakdown of locations, this book provides a deeper look at the various Factions. Despite having kind-of invented the splatbook with their line of Complete (Insert Class/Race Here)’s Handbook products, TSR didn’t go for the Vampire: the Masquerade route of having a splatbook for each and every Faction in the game; instead, The Factol’s Manifesto condenses the sort of information that would have been in there into a single slim volume, and it works great.

Each Faction is given a player-facing look at their philosophy, their leader, their headquarters, and some significant NPCs and other snippets. There’s also a DM-facing section in each chapter which offers ideas for stuff which may be going on behind the scenes, though the authors emphasise that these are just ideas and aren’t necessarily canon for the purposes of your home campaign. (Already, the contrast with White Wolf from the same era is refreshing.) Special powers are given for Faction members which go beyond the abilities everyone gets for joining, giving players a strong incentive to try and seek advancement with their Faction in order to gain additional abilities.

Although it came out in 1995, a mere year after the campaign setting premiered, the book already shows some striking developments over the original core setting. Aside from the new D&D logo at the top which was phased in when the new, tweaked 2E core books got brought out (removing the iconic dragon-ampersand, an unforgivable omission which wouldn’t return until 5E), there are also some new amendments and additions to the overall settings in here. For instance, the leader of the Sensates is given a new surname – she’s now Erin Montgomery, with “Darkflame” being her middle name – presumably because they realised that in actual play having a “Factol Darkwood” and a “Factol Darkflame” as the leader of very different Factions ended up being confusing. (It certainly was in our campaign; killing them off was probably the best thing we could do to bring clarity to Sigil politics.)

More substantively, there’s hints that there used to be many more Factions in Sigil – dozens of the things! – but the Lady of Pain imposed a strict limit of 15, which prompted a brief civil war-cum-purge which the Factions of today are the survivors of. This is a nice development which answers a whole bunch of significant questions about the setting, including (off the top of my head):

There’s also a shift in emphasis noticeable, with the book referring the reader not to the Planescape boxed set to get the basic rundown on the Factions, but The Planewalker’s Handbook, which is already spoken of here as though it is the core book of the setting. That may simply because it’s a player-facing book, and had come out that year to boot so it was an opportune moment to give it a plug and push its sales a bit, but I suspect that there is also an aspect here of TSR realising that the big boxed set approach they had been taking was beginning to become commercially unviable and wanting to reposition The Planewalker’s Handbook as the core book of the setting so as to ease the need to stock lots of copies of the core box, which could be marketed more exclusively to DMs.

In short, the Manifesto is a supplement which finds the Planescape setting evolving, but evolving in a way which for the most part makes sense and feels like a natural embellishment of what had gone before. 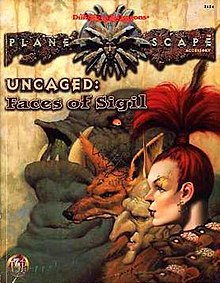 Uncaged is a big collection of NPCs which makes good use of the fact that all the NPCs live in the same town. Whilst they can be treated entirely atomistically if you wish, each of the NPC descriptions also includes links between the NPC in question and at least one other NPC in the book – sometimes a minor connection, sometimes something more significant. Thus, the book describes not only a series of NPCs to enrich Sigil with, but also a network of connections between them which helps the GM find the answer to questions like “Are there any rumours of X having enemies?”

In fact, some of these connections amount to larger plots, with useful diagrams in the appendix at the back of the book giving extremely clear overviews of how the plots in question are structured. You could, in fact, very happily run a sandbox Planescape campaign using this book as the primary reference, simply by having the player characters bounce off the NPCs in question. Used in conjunction with In the Cage and the Factol’s Manifesto, it makes Sigil a city setting as rich as any described in the citybook-happy days of the 1990s, with books like the excellent original version of Chicago By Night for Vampire appearing almost shallow in comparison.