Michal Oracz’ De Profundis was first published by Portal in his native Poland, before an English translation was released by Hogshead Games as the last of their New Style line of highly experimental RPGs and storygames. In fact, De Profundis dispenses with so many of the accepted features of games that it’s an interesting philosophical question whether it’s a game at all. 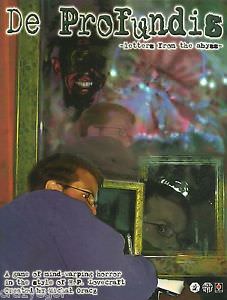 De Profundis is an exercise in writing Lovecraftian epistolary fiction. You can play it with others by exchanging letters or play it solo; you can write from the perspective of a fictional character and/or set your letter in a historical time period if you wish, but you can also write as yourself in your own time period, and either way you are encouraged to use incidents in your own life for inspiration for supernatural portents or worse. Advanced play can include producing props and the like to send to your correspondents.

The thing is, the only thing which makes this a game as opposed to a group exercise in creative writing is that it declares itself a game. There really isn’t any particular means of impacting what someone chooses to write, and nothing constraining what you choose to write. The question of what exactly constitutes a game is a philosophically thorny one, but I would say that a game is distinguished within the broader category of “play activities” by structure, with said structure providing constraints which means that you cannot just make whatever move you like but are limited in your options. It doesn’t matter whether these constraints arise from the actions of other players or the rules or whatever – whether it’s “you can’t move into check on purpose” or “you must roll equal to or above the difficulty number on 1D20 plus stat plus skill”, these constraints are what I would regard as distinguishing a game from undirected play.

As it stands, De Profundis is a creative writing exercise, and one not necessarily without merit. I am greatly reminded of the Slenderman craze online, in which various blogs and vlogs picked up bits of the myth from each other and developed and propagated them much like a very large, public game of De Profundis – except the responsible parties there didn’t think of it as a game so much as a creative endeavour. There’s something strangely appropriate about the New Style line ending by abandoning games altogether.