In both 1st and 2nd edition, some of the most absolutely beloved supplements for WFRP have been big, thick explorations of the unique metaphysic of the Warhammer world. It’s that cosmology, after all, which gives rise to the conventional religions of the setting, the ways of magic, and the forces of Chaos – all three, in fact, are manifestations of the Warp, just as they are in Warhammer 40,000 or Age of Sigmar. A close look at these supplements therefore seems in order if we’re going to hope for suitable sequels for 4th edition. 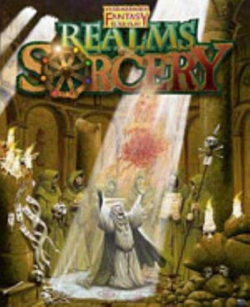 Penned by Ken and Jo Walton, this expansive magic supplement for 1st Edition was long-promised but only emerged right at the tail-end of Hogshead Publishing’s custodianship of the game line; in fact, it was one of the very last books Hogshead published for the line, emerging about a year before James Wallis decided to divest himself of the business and shutter its old game lines in 2002.

It had long been acknowledged that the magic system in core WFRP was a rather rushed affair, with a perceived lack of flavour being a major complaint. Realms of Sorcery is a comprehensive attempt to inject as much flavour into the magic system as possible, going beyond simply expanding the list of spells by providing extensive discussions of all the different cultural flavours of magic in the Old World.

It’s these extensive setting essays, in fact, which offer the really important lesson in the book: it’s all very well providing game mechanical goodies, but what’s really satisfying is providing them with a cool cultural framework that illustrates how this magic fits into the game setting. Take away the social aspects of magic, and what you’re left with is counterfactual physics – the Waltons don’t make that mistake. Each magic type has a particular history and context in the Old World, and we get to learn about that, the day to day lives of practitioners of that magic, their place in their societies, and major institutions and NPCs associated with the magic in question. (There’s even some fresh content on witch-hunters, since a lot of their work involves chasing after magic-users.)

The main problem the supplement has is that whilst it adds a lot of fluff and some handy bits of crunch to the 1st Edition magic system, it’s still building on the same foundations. The problem of a lack of flavour is well and truly solved by it, but the problem of excessive fiddliness isn’t. On balance, then, I am inclined to prefer the 2nd Edition magic system to the original, but the flavour and fluff presented in this supplement means that it has ample system-neutral material to mine.

Realm of Chaos: Slaves to Darkness 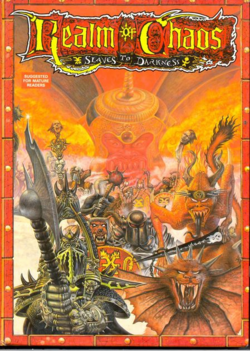 This is the first part of the legendary two-volume set which largely defined Chaos for the purposes of the entire Warhammer franchise. Various disparate bits of lore had previously been mentioned here and there, but it’s this set which brought it all together, and more or less all Chaos-related material subsequently published can be boiled down to an embellishment on or restatement of the material here.

Released in 1988, the book is a bit of an oddity, since it is in effect a crossover product between WFRP, Warhammer Fantasy Battle, and the first edition of Warhammer 40,000. Whilst Chaos had been called out as a presence in the Old World in 1st Edition WFRP, its role in the 41st Millennium had never been spelled out, so this book is the original source for all of that tasty Fall of the Eldar/Horus Heresy stuff. (It also incorporates infamous groups like the Illuminati and the Sensei, who have been largely scrubbed from the setting in later editions, as well as massively retconning the Eye of Terror and what’s going on in there.)

Gorgeously illustrated with incredibly flavourful art and crammed to the gills with material, the book is split between covering the specific details of Khorne and Slaanesh and their associated nasties, as well as discussing the basic common features of the followers of Chaos, including masses of Chaotic mutations and gifts (including wacky future technology swiped from the 40K universe and provided to Old World Chaos champions) and the progression to either a Daemon Prince or a Chaos Spawn. Even if the rules you are using have moved on from this book, it drips such deliciously flavourful poison from every page that it’s decidedly worth your while to track down a copy.

Realm of Chaos: The Lost and the Damned 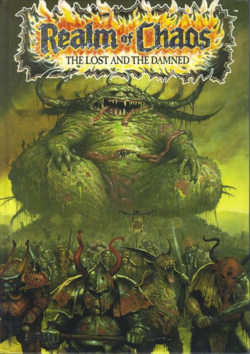 Covering Nurgle and Tzeentch, this volume complements Slaves to Darkness and adds some new wrinkles to it. Further discussion of the now-retconned Star Child angle in the Warhammer 40,000 universe makes it even more clear that the Emperor is becoming the Chaos God spawned by humanity’s fall, just as Slaanesh was spawned by the fall of the Eldar. Guidance on creating minor powers of Chaos are also provided. Beyond that, it’s basically more of the same goodies as the previous book. Subsequent books dealing in Nurgle and Tzeentch have riffed on and expanded this material, but have rarely improved on it. 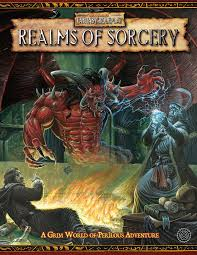 Unlike the first edition version of this book, which tried to take into account all the cultural traditions of magic the Old World has to offer, the second edition version is more or less exclusively focused on the Empire, as the assumed focus of a WFRP campaign; Green Ronin/Black Industries had, to be fair, been putting out a range of sourcebooks for other Old World nations and cultures, and it did make sense to put those peoples’ magics in their respective supplements so as to make them suitably complete guides to the cultures in question.

Otherwise, this largely follows the admirable example set by the 1st edition version, with extensive details on the place of the Colleges of Magic, unsanctioned hedge wizards, and witch hunters alike in the society of the Empire balancing out the crunchier additions to the system, which largely consist of a pile of new spells plus an expanded range of magical mishaps. 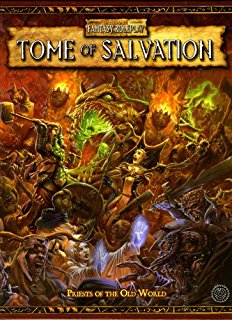 This is a supplement type which was new to WFRP when it came out, but not new to Green Ronin, who did a very similar “here’s an extensive description of the gods and their worshippers” supplement some years earlier in the form of the Book of the Righteous under the D&D 3E rules. The big difference here, of course, is that they’re dealing with the pantheon of the Empire (as with Realms of Sorcery, the book leaves the religions of other nations to the supplements specifically detailing them), with all its rich flavour, and they do an excellent job of deepening that. The matter of the Chaos Gods, naturally, is left for the… 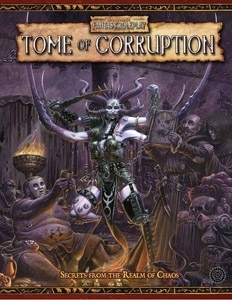 This dense stack of information has the legendary reputation of Realm of Chaos to live up to, and it broadly succeeds, with masses of Chaotic enemies, expanded mutation tables, interesting NPCs (like a backstreet surgeon who makes her fortune by slicing off mutations so people don’t get burned at the stake), and all sorts of other gribbly nastiness. There’s even a rundown of the Norsca culture that lives right on the periphery of the Chaos Wastes, and of course notes on both the Dark Elves and the Chaos Dwarfs. Of the three fat cosmology tomes produced by Green Ronin for WFRP, this may be the best – all three pull off the trick that the Realm of Chaos books did, where you could open the book anywhere and have a bunch of really exciting ideas for games jump out at you, but Tome of Corruption is by far the best at this trick.

3 thoughts on “Tomes of Realms”