As well as existing within the setting of Werewolf: the Apocalypse as a gleeful self-parody of White Wolf, the Black Dog Game Factory actually existed as an imprint of White Wolf, through which they published material which they wanted to flag as being No Seriously This Is For Mature Audiences Only. Ironically, though, Black Dog didn’t produce that much for Werewolf itself. The sole book they put out for it was Freak Legion, a players’ guide to creating and playing fomori. 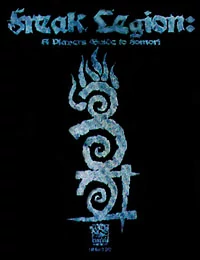 Fomori in Werewolf are seriously messed up. They’re people who have been infected, corrupted, and eventually entirely possessed by Banes – Wyrm-spirits born out of human suffering – and have become physically mutated as a result. Many of them end up working for Pentex, the evil corporation that acts like a Captain Planet villain that’s the main face of the Wyrm in the mortal world; sometimes that’s because they got corrupted through involvement with some Pentex plot, sometimes that’s because Pentex tracked them down, sometimes that’s because their Bane nudged them into joining Pentex. Either way, most of them end up working on Pentex First Teams – the special forces squads Pentex uses for fighting werewoofles.

There are three components that nudge Freak Legion into Black Dog territory. The first is the body horror intrinsic in the fomori concept. The second is the human misery involved in their creation. The third, and by far the greatest, is the gleefully flippant attitude with which the book handles the other two factors. This might be billed as being for Mature Readers Only, but you only have to read the description of the Savage Genitalia mutation (it’s exactly like it sounds, only even worse if you combine it with other mutations as they suggest) to realise you are dealing with Immature Writers Only.

Now, of course it could be that the authors were playing up to the gruesome, purilely sexist, and gleefully violent tendencies they’d ascribed to Black Dog in the setting material – but then again, wasn’t Black Dog a parody of White Wolf themselves? There’s an extent to which it feels like this is a slippage of the mask of cultured sophistication that White Wolf like to adopt. In the cartoon nonsense of Freak Legion we see a dissolution of 1990s White Wolf’s pretences to high art and clever handling of serious issues to reveal the violence-happy edgelord dorks underneath. At its worst it yields insufferable nonsense like Savage Genitalia; at its best there’s a fresh, exciting edge to it which might not be especially intellectual, but certainly seems to offer more of a clue to White Wolf’s original popularity than any stab at high art.

One thought on “Freak, C’est Sick”