Abstract Nova is one of those RPG publishers who you can’t quite place as belonging to any particular trend or niche. They’re not major players in the RPG publishing scene, but they don’t seem to want to dive into the fully avant-garde indie end of the genre anyway – all of their stuff seems to be some form of traditional RPG, though often with off-kilter subject matter. Nor do they seem to be especially caught up in any particular “scene”, like Forge-style RPG theorising or OSR archaeology. At the same time, their products seem to all follow the same general pattern – a pattern I’ll pick apart for you here through an examination of two of their games. 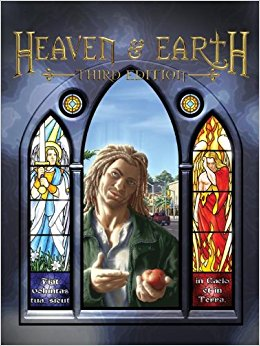 Heaven & Earth has the distinction of being an RPG which has had a radically different system each time it was released. Crafted as the brainchild of John R. Phython, Jr., it first emerged from Event Horizon Productions with a card-based system. A few years later, Guardians of Order picked it up and put it out adapted to the Tri-Stat system, which was their own in-house system, back in 2001. For whatever reason, Guardians of Order let the property go, and its third edition (with a new system based on dice) became the debut product of small press Abstract Nova Entertainment back in 2004, who have kept it available since. (The 3rd edition is the version I’ll be reviewing here.)

Heaven & Earth, in fact, is the sort of high-concept, very narrowly focused game which has kind of become Abstract Nova’s schtick. The general Abstract Nova approach is that in terms of format their games are decidedly traditional RPGs, but they are directed at a very specific experience within that format, just as many indie RPGs and story games diverge from the traditional RPG format in order to aim at a particular game experience. Abstract Nova games will typically present you with an extremely specific scenario, a specific idea on what general sort of person the PCs are, and a reasonable idea of how the PCs and the scenario will interact. They essentially provide core rules plus campaign scenario all in one package.

For the purposes of Heaven & Earth, the premise is this: out in Kansas is the sleepy small woodland town of Potter’s Lake. The player characters are all folks who are either new in town or who have returned to town after a long absence – a necessary constraint since it is assumed that they will get to know the town and its inhabitants through play. Potter’s Lake, you see, has all sorts of dark secrets beneath its benign facade, some of which border on the supernatural – for there are more things in Heaven & Earth than yada, yada, yada.

In case you hadn’t picked up on this, Heaven & Earth is very much a game that’s riffing on Twin Peaks. This was apparently even more blatant in its 1st edition, a rough and unpolished thing which got a well-deserved roasting on the System Mastery podcast; in that edition, examples of play included PC concepts like “visiting FBI agent”, but even in this version – which manages to have a distinct enough atmosphere that it feels like its own thing – you’re still in the “weird goings-on in a small town” subgenre that Twin Peaks heralded. (Actually, of all the stuff in this vein you could compare it to, I’d say it’s closest to the short-lived and much-mistreated American Gothic.)

As far as RPG precedents go, whilst in the gamemastering chapter discussions of storytelling, theme and mood seem to be largely cribbed from the White Wolf formula I would actually compare this to Over the Edge, since you have the same combination of a rules-light system, surreal supernatural goings-on, and a prepackaged setting including key locations and NPCs right there in the core book. The big difference is that whilst Over the Edge is all weird all the time, Heaven & Earth encourages a more subtle approach, as well as offering the referee a full explanation of what’s going on right there in the core book.

In terms of the big secret of the setting, it’s rather fun so long as you are happy to roll with a uniquely heretical spin on Christianity as the underlying metaphysic of the game. The title suggests this, but to be honest I think it’s worth putting this front and centre as a caveat, since for some having Christ be a big deal would be a problem and for others having Christ following an extremely different agenda from the Biblically reported one would be outright offensive. Conservative Christians and militant atheists alike may have beef with this.

Still, for the most part I found the book to be pretty decent. I have a problem with one of the NPC writeups, since the whole thing is based around them being a trans person who has transitioned but keeps their status quiet to avoid backlash. It’s not that the NPC description taken in isolation is transphobic – it’s about as good as you’d expect for an RPG book written by a well-meaning, sympathetic ally from this era. The problem is that this is in the midst of a collection of NPCs who are key to the town and illustrate its weirdness, and the implication that being trans constitutes a Lynchian level of strangeness is deeply unfortunate. Aside from that, there’s very little in this book which I would hesitate to throw into a game as is.

The system is basic but functional. It’s based on adding your stat plus a modifier for special training (or, very occasionally, other circumstances) plus a die roll, and trying to hit a target number of 9. The neat thing is that the die you throw depends on the difficulty of the action – so easy stuff is based on a D20, and the most achingly difficult stuff is based on a D4, and at intermediate difficulties the other standard RPG dice types come in. This is quite nice because it very vividly illustrates the increasing importance of training and aptitude the more difficult a task gets: it’s much more viable to muddle along on blind luck when a task is easy, but when it’s hard unless you have the right preparation you are going to struggle or find it impossible.

It’s certainly an improvement over the 1st edition system, which tried to apply a tarot-style divinatory approach using standard playing cards, which is the sort of thing which gave White Wolf heartbreaker designers all manner of jollies in the 1990s but which is entirely too vague for basic action resolution purposes.

Another concept abandoned from earlier editions is the idea that every player always has a character present – whether that’s their primary PC or a less important supporting character. It sounds like this was implemented in an annoyingly fiddly way, but it’s a slight shame that there’s no attempt to re-implement it here – though since this edition puts a high value on the players discovering the secrets of Potter’s Lake in tandem with their characters doing so, perhaps troupe-style play would undermine that.

Heaven & Earth more or less accomplishes what it’s aiming at (after the false start of two previous editions) in terms of being Twin Peaks: the RPG and manages to offer reasonable support for supernatural shenanigans plus a sample adventure in the space of its 128 pages, and as such I find it hard to criticise. Perhaps the main thing is that I don’t see it as having much replay value – I can’t see myself running multiple campaigns of it with the same gaming group – but not every game has to be a perennial thing like D&D or Call of Cthulhu. 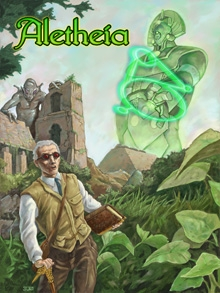 Fortean events and their investigation are also the focus of 2007’s Aletheia by Werner Hager, Lee Foster, and Monica Valentinelli, but with a more global (and indeed cosmic) scope. More so even than Heaven & Earth, however, it assumes a particular campaign structure and premise. Once upon a time in the early 20th Century, the genius Jericho Usher applied his intellect to the question of the paranormal; having made extensive discoveries, he disappeared, but not before preparing his faithful assistant Terrance Chastain for what must come next.

In 1970, a couple of years after Usher’s disappearance, Chastain established the first iteration of the Seven Dogs Society – as designed by Usher, a group of seven people selected for their interests in and/or connections to the paranormal, with a mandate to investigate Forteana across the globe with an eye to discovering whether a single unifying concept lurks behind them all. The Society would be able to call on the resources that Usher had amassed, including a headquarters in Alaska which contains significant paranormal secrets of its own. The first incarnation of the Society eventually disappeared without a trace; the second incarnation was brutally murdered on an investigation. One month prior to the start of the campaign (assumed to be in the present day – or 2007, presumably, if you want the assumed timeline to work), the PCs were recruited to be part of the third incarnation of the Society…

In system terms Aletheia honestly isn’t that much different from Heaven & Earth – much of the character generation process is similar, save that the options for paranormal powers on the part of the PCs are way more upfront and can be chosen at game start rather than being learned in play, and ultimately the major difference is that the previous resolution mechanic is swapped out for a simple D6 dice pool system.

The major distinction is that it goes even more narrow with its premise; sure, geographically you have the entire world (plus cosmos) to run about in, but you have a very specific premise for who the PCs are, a set explanation behind all paranormal phenomena, an exhaustively detailed home for them (with details ranging from the interesting to the trite), and even an expected course of a campaign as the players unravel more and more of the setting’s mysteries, with a defined endpoint.

In short, Aletheia more so even than Heaven & Earth is game system and campaign scenario all in one, which makes me wonder what the point is of putting it out as a bespoke system rather than an offbeat campaign module for a more popular paranormal investigation RPG. Chaosium, for instance, are reasonably generous about who they give Call of Cthulhu licence agreements to, and I suspect Aletheia would have sold a bunch more had it been presented as an alternative modern-day setting for Call.

As far as the setting specifics go, its mythology isn’t much to get excited about if you’ve looked at New Agey conceptions of how the universe works – the sort of mashup of quantum mechanics, recycled Crowley, reheated Christianity, and DMT mysticism that the background dabbles in is the sort of thing any particular issue of Nexus magazine is filled with. In some significant respects it ends up riffing on the same basic ideas as the backstory to Heaven & Earth, and indeed provides a basis for some setting elements by resorting to the same legends to explain them. Despite being wilder and woolier in some respects, somehow it feels less flavourful than the more nicely targeted metaphysic of Heaven & Earth.

The main issue with Aletheia is that it is really only set up to allow you to run one campaign, and then you’ve kind of exhausted it – which pretty much sums up the whole Abstract Nova approach, so far as I can tell. As such, it won’t be displacing any of the other paranormal investigation RPG options in my library any time soon.