Recently I got a chance to pick up a copy of Games Workshop’s 3rd edition of Call of Cthulhu from 1986. Much as with their edition of Stormbringer, this is a handsome hardcover presentation of what had been a boxed set of core rules and a separate supplement (the Cthulhu Companion) in the US. 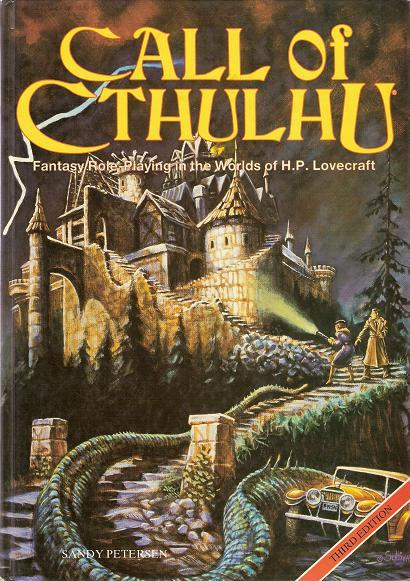 As far as the core rules go, this is effectively a reprint of the 2nd Edition rules from 1983, which in turn were really no different from 1981’s first edition rules. As with Stormbringer, the first edition of Call of Cthulhu included the original Basic Roleplaying rules booklet, and a second rules booklet that adapted the rules for Call of Cthulhu purposes and a booklet providing source material for the assumed 1920s setting. Though both games were hot sellers, it must have quickly become apparent that juggling the Basic Roleplaying pamphlet and the game-specific rulebook was a royal pain, so in 1983 when they both came up for a reprint they got bold new 2nd editions in which the required information from Basic Roleplaying was fully integrated into the text of the main rules booklet.

The upshot of this is that 3rd edition Call of Cthulhu is as decent a snapshot of the game’s original design as any of its first three editions, but at the same time it still comes before 4th, 5th and 6th editions began to incorporate more and more additional material into the main rules text. (By comparison, 7th edition is a thorough re-edit and restatement of the rules.)

What’s revelatory about this is how good Call of Cthulhu‘s original design was – and how some issues which had developed over the years with the game arose from grafting new material onto it without applying due consideration to how the material sits with its baseline assumptions. By paring back the wealth of options modern editions of the game present, we can see which features were originally seen as being essential by Sandy Petersen – and how issues arose when other hands built away from that blueprint.

For instance, take the list of professions here – it really is extremely brief, and tends to assume professions with a significant educational background. This is in keeping with the original 1920s setting (the only one covered in the original core) and the assumption that PCs will both be inclined to go investigate mysteries and have sufficient disposable income to do so. Making professional skill points dependent solely on EDU in this circumstance makes a certain amount of sense, though now that the range of professions has been greatly expanded the reform in 7th Edition (where some professions derive their skill points from a combination of EDU and some other attribute) is highly welcome.

The proliferation of profession types made available in the game has acted to obscure the original “middle-to-upper class spods researching the paranormal in their spare time” assumption. 7th edition’s suggestion of giving your investigative group some actual organisational premise rather than simply being a bunch of random friends flung together works much better in a game with its range of professions available, since it tends to suggest a narrow range of organisation-appropriate professions.

The types of indefinite insanity available here are notable because a) there’s only six of them and b) in stark contrast to the absurd results some later editions offered, it limits itself to six particular sets of symptoms, all of which could believably be the result of a traumatic disintegration of an investigator’s sense of reality or other trauma experiences. It isn’t quite up to date with 100% modern understandings of PTSD, but you wouldn’t necessarily want it to for game purposes anyway, and it’s far closer to reality than the “spontaneously development schizophrenia” results available in 5th edition as a result of various additions being made to the original brief table.

Part of the problem, I would argue, was of Petersen’s own making – there is absolutely no need for a phobia list as long as is offered here. It’s helpful in terms of suggesting potentially triggering stimuli, sure, but by presenting it as a big fat list without sufficient caveats Petersen created a precedent for piling more and more examples onto the heap. (This is already apparent in the Cthulhu Companion.) You could just say “the Investigator develops a phobia of some triggering stimulus which reminds them of the original incident, determined by the Keeper”, and leave it at that. (Whilst 7th edition has retained the long phobia list, in general its sanity system avoids DSM-V-type diagnoses in favour of a system which to my eyes better represents the sort of post-trauma fragility we’re looking at here at the cost of somewhat greater complexity.)

Seeing the original selection of magic spells makes it evident that Cthulhu magic originally focused very much around summoning and binding slave-entities or contacting and parleying with greater entities, which is another point which the grand accumulation of spells documented in The Grand Grimoire of Cthulhu Mythos Magic, whilst extremely useful, can obscure – namely, that most of the other magical effects arise by being gifted to humans by higher forces.

The selection of creatures and deities presented here focus mostly on Lovecraft’s own creations, with a few inclusions from Clark Ashton Smith, August Derleth, and one each from Brian Lumley (Shudde M’ell and the Chthonians would, I say, basically count as a single pick from Lumley’s back catalogue) and one from Ramsey Campbell (Y’golonac); here’s where Chaosium’s licence with Arkham House paid off, I’d say.

The sample adventures here – The Haunted House, The Madman and The Brockford House – suffer massively from being very, very terse, and at points not really reflecting the investigative mode of play assumed for the game. The Cthulhu Companion offers some other adventures which are a bit better; the best one is Glenn Rahman’s Mystery of Loch Feinn, which starts to resemble a properly-developed investigative scenario.

The thing about investigative scenarios is that I think that, unlike dungeon crawls, they require far more writing and development to present in a way that allows someone other than the person who originally designed them to run them. I could run one of my own investigative scenarios with a few pages of location and NPC notes because, as their creators, I know how all the details of how they interrelate and what they want, and anything I improvise on the spot can be done in the light of all that. Communicating that to an extent that allows other people to do that requires substantially more information than simply listing the locations and NPCs, which is a big challenge; the proliferation of railroaded investigations which present a linear sequence of events may be a response to this difficulty.

Either way, I think the major weakness of early Call of Cthulhu is the poor examples given of investigation design, which resulted in a proliferation of “miss the clue and get boringly stuck” investigations that marred the game’s reputation inspired responses like Trail of Cthulhu. 7th edition’s sample adventures in its core book, as well as its excellent guidance for referees, goes a long way towards countering that.

6 thoughts on “The Archival Call”