Mordenkainen’s Tome of Foes is out, and to a large extent it’s a third Monster Manual for 5E, much as Volo’s Guide to Monsters was a second one. That said, as with Volo’s Guide the fat stack of new monsters is backed up by some delicious setting material offering stuff for both players and GMs to chew on; in 2nd edition terms, then, it’s perhaps more like a Monstrous Compendium appendix joined at the hip with a collection of mini-Van Richten’s Guide-type supplements putting a microscope on particular creatures. 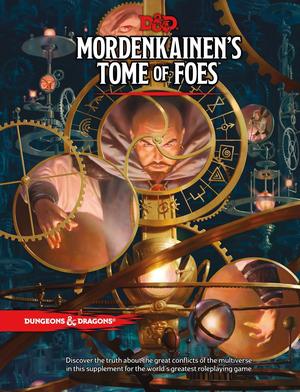 This time, the book is deliberately less Forgotten Realms-focused; not only is Mordenkainen a Greyhawk native (Gary Gygax’s first PC, in fact – and the often morally dubious exploits of him and Bigby in Gary’s home campaign are alluded to in the text here), but the detailed treatments on offer cover a set of major conflicts which repeat themselves across the mulitiverse on numerous campaign worlds and planes. You’ve got the Blood War between devils and demons, you’ve got elves vs. drow, you’ve got dwarves vs. dueregar, you have githyanki vs. githzerai, and to round out the treatment of iconic PC races you have a look at how halflings and gnomes alike are able to eke out their comfy existences despite all the conflict around them. (This includes a canonical statement that Kender are the halflings of the Dragonlance setting, which I am sure will make Dragonlance superfans infuriated even though they’re dead to rights there.)

On the whole, this is a useful exercise in teasing out lore which had been seeded in a range of monster statblocks and other supplemental material from right back to the 1st edition days and compiling it in centralised descriptions which enrich the cultures of the folks described. The elf stuff does a great job of selling the Eladrin and Feywild ideas even to stuffy old 4E refuseniks like me, the duergar material injects them with a fat shot of flavour by leaning hard on the “twisted by slavery under the Mind Flayers” aspect of their history, the Blood War stuff updates the idea nicely and the githyanki/githzerai stuff gives a really vivid look at their weird-ass ways of life.

All of this comes with useful system bits here and there that are enormously useful. Do you want special powers for devil cultists or folks who’ve made pacts with particular demons? Do you want PC githzerai or githyanki? Do you want to tweak the flavour of your Tiefling depending on which Lord of the Nine they descend from? It’s all here.

As far as the monster selection goes, there’s a decent focus on the subjects covered (so you have a devil, demon or drow for all occasions) as well as some nice miscellaneous bits and pieces. The lavish descriptions of major demons and devils are my favourite, if only for the brimstone-tinted whiff of the joy to be had reading their original Monster Manual writeups.

In general, Wizards’ quality-over-quantity approach to 5E releases seems to be paying off still. The more multiversal approach leaves me with hope of more non-Realms setting material to come – for one thing, it would be odd to spill so many words on Oerth and Krynn in this book if there were not some intent of eventually doing something with them. And as well as the githzerai and the githyanki, this book updates for 5E the giff – the spacefaring, gun-toting hippo people from Spelljammer…