One of the nice things Cubicle 7 has done with the One Ring line is to do regional supplements in a two-book format: one supplement to give a general overview of the region and its major characters, and an adventure book to provide prewritten adventures for the area in question. They haven’t done these for all the regions they’ve covered – Bree, for instance, covered a small enough area to combine both setting details and adventures into a single book – but where they have it’s a nice way to do it. It means that if you only want the setting detail and don’t give two shits about the prewritten adventure, you don’t have to buy the latter – but if you do go for the prewritten campaign, the setting book greatly enriches it, as well as giving you ample support for if and when the players go off the rails altogether. (Games Workshop ended doing something rather similar with 1st Edition WFRP, with the Power Behind the Throne episode of the Enemy Within mega-campaign being supported by the setting supplement Warhammer City, known by various names in reprints with the most recent renaming being Middenheim: City of Chaos). 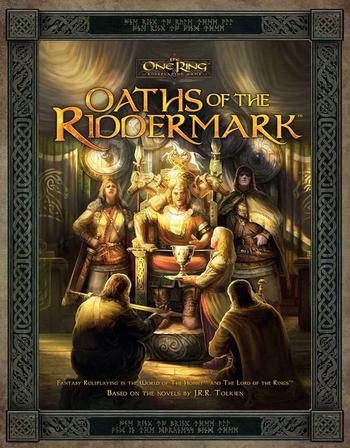 Cubicle 7 did Horse-Lords of Rohan a while back, so it was only a matter of time before they got around to doing some horsey adventures with the Riders; Oaths of the Riddermark delivers on this, giving PCs a chance to make a big impact in the court of King Thengel – son of King Fengel, and father of Theoden (the King we remember from The Lord of the Rings).

Blood On the Snow is a brief linear adventure which is supposed to get the PCs into the good graces of Thengel’s court. It relies an awful lot on one particular NPC behaving in a completely idiotic fashion, and one which immediately neuters the main choice the PCs are faced with in the adventure. The best thing I can say about it is that it’s quite brief.

Red Days Rising doesn’t depend too much on the action of Blood On the Snow, thankfully, but does set up the action of a range of the later adventures. So long as you can finesse some other reason for King Thengel to take the PCs into his confidence, it’s a nice piece in which traditional adventuring activities sit alongside difficult acts of diplomacy, as Thengel uses the player characters to try and negotiate a peace between his feuding Second Marshal and Third Marshal – healing an ill left festering by his father King Fengel, who preferred a “divide and rule” approach to kingship. It’s reasonably nonlinear and has a culmination which depends enormously on player actions across the entire span of the adventure, and is as fully-developed and well-rounded as Blood On the Snow is sparse and sketchy.

Wrath of the Riders is misnamed since it is another peace mission – this time to the decidedly dodgy Dunlendings, and nicely the adventure recognises that the Dunlending group involved may be judged by the party to be too sinister to deal with, and gives pointers on what to do should they decide to abandon the mission on those grounds. Black Horses, Black Deeds is for the most part a standard bandit hunt, notable mostly for having some minor connections to Gondor – surely a realm that Cubicle 7 must be detailing sooner or later – whilst Below the Last Mountain gives the players some tough choices to make in pursuit of orcish raiders.

Everything comes to ahead in The Woes of Winter, in which the orcs make their final push and much depends on how well the party have both won around the Second and Third Marshall’s loyalties to the King and how well they’ve forged a peace between the two divided camps. The events of more or less every adventure from Red Days Rising to Below the Last Mountain has a potential impact here, and equally the players’ actions early on in how they handle an apparently-festive occasion can have a big impact on the circumstances of the final battle.

The introduction of the book gives the usual boilerplate about how the default mode of play for The One Ring assumes only one or, exceptionally, two adventures per year, but also provides a framework for running the stories in a contracted timeline, as the other adventure collections (aside from The Darkening of Mirkwood, which has its decades-long span intrinsic to its designs), but actually it seems to me that the adventures were originally designed with the more contracted timing in mind – The Woes of Winter, featuring the wedding set up in Red Days Rising, makes more sense taking place in the winter of that year, with the intervening missions being further attempts in the overarching process of bringing the two Marshalls together and ending their feud. As such, the entire action of Oaths of the Riddermark could fit reasonably easily into an ongoing campaign where the focus is elsewhere in Middle-Earth as an extended Rohirrim-themed break.

Alternately, there’s a set of pregenerated Rohan characters here, which both offer a nice insight into how diverse PCs from the same culture in The One Ring can be and provide a broader range of Riders of Rohan character ideas than “Eomer with the serial numbers filed off” or “Eowen with the serial numbers filed off”. Running the adventures as a short campaign for local characters would also work very well, particularly since in contrast to previous adventure supplements, which have taken place in wild realms with various cultures in existence but no single one with much authority beyond the immediate borders of their main settlements, here the adventures are taking place in something resembling an actual nation, with a common cultural context tying all the adventures together.

Between them, Horse-Lords of Rohan and Oaths of the Riddermark go a long way to reassuring me that there’s scope to actually do stuff with Rohan, and it isn’t just a rather empty spot on the map mostly associated with horsies and various chores to accomplish on the way to Gondor. They also find Cubicle 7 tackling a somewhat more complex society than those depicted in preceding One Ring supplements – almost like these were a dry run for the Gondor supplement and adventures which must surely follow sooner or later.

After all, at this point (and taking into account the reports of a lavish Moria boxed set to come soon) there’s only really three major places in Middle-Earth that the One Ring line hasn’t touched – Gondor, the Shire, and Mordor – and Gondor by far has the most adventure potential of these three. It really doesn’t make much sense for PCs to be having rip-roaring adventures in the Shire between The Hobbit and The Fellowship of the Ring, and Mordor isn’t really a place where there’s much hope to accomplish anything good until the War of the Ring itself – which I’m kind of hoping will be its own supplement to cap off the game line. (Indeed, I could see scope in doing Gondor and Mordor in one supplement and one campaign accessory – so much of Gondor’s efforts during this time are going to be directed towards containing Mordor, after all, that most adventures done on Gondor’s behalf are likely to be connected to hampering Mordor’s forces in some way or another.)