Mythic Perspectives was an Ars Magica fanzine that came out between 1997 and 2001. This was the era of 4th Edition Ars Magica – a welcome return to form for the game after the various missteps of 3rd Edition (mostly involving various kludges added to make it the backstory to the World of Darkness – including the imposition of the Realm of Reason and various unintended consequences arising from it, like libraries counteracting rather than helping the decidedly intellectual, empirical, experimentation-oriented and scholarship-focused magic of the Order of Hermes).

It was also just about the last era when producing a fanzine through conventional printing methods rather than throwing it up online or maybe doing it as a PDF download made even the slightest bit of sense. These days, most of what you’d want a fanzine for is provided much better via online communities – with greater regularity and interactivity at that. 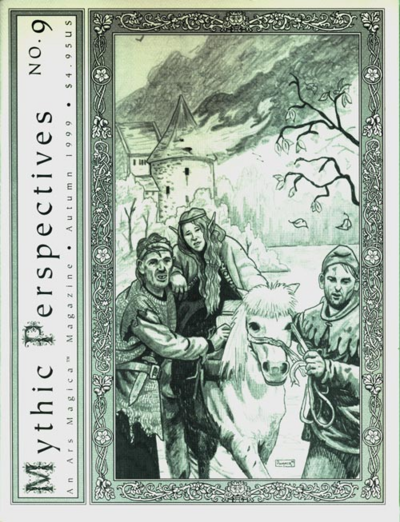 Still, back when I was running my Ars Magica game for my now-dissolved Monday evening group, one of the players gave me a couple of copies of Mythic Perspectives (thanks Andrew!), and I’m favourably impressed. These were issues 8 and 9, two of the three issues released in 1999 – and the last issues to be put out with any regularity. (One more squeaked out in 2000, and another in 2001.)

The tail-off in publication frequency can be attributed to the fact that Mythic Perspectives was put out by Damelon Kimbrough through his Gnawing Ideas imprint – and in early 2000, Atlas recruited Kimbrough to become the line editor for Ars Magica. However, his stint in the job would be short-lived; he would be replaced by David Chart in 2001, and Chart would go on to manage the line up to 2015, thus overseeing not just the tail end of the 4th edition line but the entirety of 5th edition issued to date. According to the fandom grapevine Kimbrough got married and moved to France in 2008, where he pursues other interests these days; good for him.

The 1999 issues, then, represent perhaps Kimbrough’s inadvertent “audition tape” for Atlas Games – produced on the back of winning the 1998 Origins Award for Best Amateur Game Magazine. As you would expect of a product of the Ars Magica fandom, it’s a delicious mixture of folklore, real history, and game system tinkering, and there’s a familiar name or two in the credits – indeed, David Chart contributes some considerations on “Society and the Gift” in issue 8.

Atlas Games have traditionally been a bit weird about putting their Ars Magica catalogue on DriveThruRPG, and I’m not sure why that’s the case – they’ve been happy to put the new editions of Feng Shui and Unknown Armies up there, for instance, and have gone to the extent of putting up Statosphere, a shopfront for fan-made Unknown Armies material along the lines of the DM Guild for D&D. Perhaps the issue is contractural, because as well as putting their full range up on Warehouse 23 – Steve Jackson Games’ awkward PDF outlet – they’ve got the last three issues of of Mythic Perspectives up there as PDFs too. (Presumably their deal with Kimbrough to bring him in as Line Editor gave them rights to these but not the earlier issues – or perhaps they just haven’t been able to produce nice scans of the earlier ones yet.)