Ah, Only War. The 40K RPG based around the Imperial Guard was originally going to be a supplement for 1st edition Dark Heresy before Fantasy Flight decided that the subject was big enough to deserve its own game, it ended up inadvertently becoming the model for 2nd edition Dark Heresy in the way it carried forward and built on the system amendments introduced in Black Crusade – especially when fan backlash over the Dark Heresy 2nd edition beta prompted Fantasy Flight to revert to a system much closer to Only War‘s to retain a bit more backward compatibility. 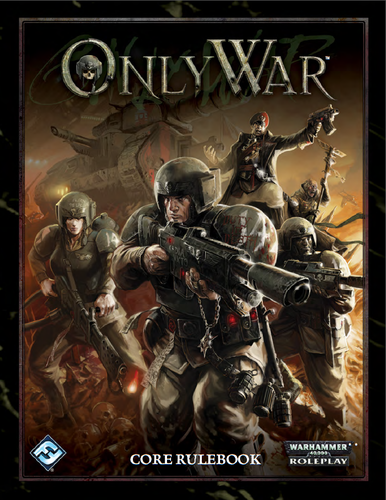 Which isn’t to say that Only War is merely a generic rules testbed – it really goes for the Imperial Guard flavour in some crucial ways. The Comrade rules are great not only for getting the sense of being part of a large, mutually supportive organisation, but also for allowing the referee to present a bit more of a meat grinder than would otherwise be viable. The fact that the PCs all hail from the same regiment really helps distinguish this from Deathwatch (where, though single-Chapter games are completely viable, the text very much assumes you are going for a multi-Chapter party), and as well as being true to the Imperial Guard structure also suggests common roots among the PCs to an extent that none of the other 40K RPGs do. The inclusion of vehicle rules and create-your-own-regiment rules in the core book makes it nicely complete by itself. There’s Ogryns and Ratlings, which I think is the first time abhuman PCs have been added to the 40K RPGs at all.

It’s a simple concept executed with stacks of flavour straight out of the core book, which is just really nice all around. Thumbs up.

One thought on “Only War Can Make These Rules Seem Right”