The Fantasy Flight era of Warhammer 40,000 RPGs is over; the licence has gone to Ulisses Spiele’s North American division, whose Wrath & Glory system is designed to depart from the WFRP-derived system of earlier 40K RPGs to more smoothly cater to characters of a wide range of power levels.

It’s timely, then, to do a little look over those 40K RPG products I’ve not yet put under the microscope here, so I’ll start off by taking in the supplements for 2nd edition Dark Heresy – the last major RPG product line they put out before shuttering their Warhammer ranges for good. 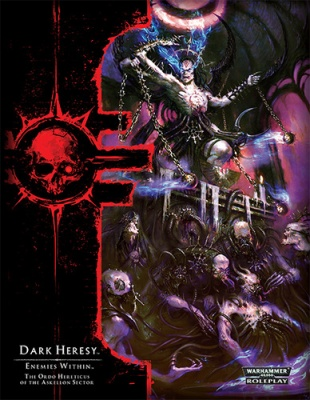 This is the Ordo Hereticus-themed supplement, and as such focuses on investigations seeking corruption and heresy within Imperial society itself. This is a nice, logical choice to start with – it means that the game can focus on investigations that take place within what in principle should be familiar territory to the player characters (since all but the most unusual player characters will be Imperial citizens) and doesn’t require extensive fleshing out of alien or daemonic forces since the foes of the Hereticus are primarily humans.

The book is largely split between material fleshing out the heresies of the Askellon Sector, the default setting for 2nd edition Dark Heresy, and rules additions of more immediate generic use. The latter include a handy range of new homeworld types and backgrounds and character options – in particular, the option of playing an Adepta Sororitas or even a mighty Sister of Battle comes in here, as does the equally intriguing notion of playing a mutant who your Inquisitor has decided to make use of rather than destroying out of hand. The latter is in keeping with the introduction of a range of options for Radical Inquisitors – those who are happy to use rather dodgy resources for the sake of destroying greater dangers – and among the ton of additional new kit offered up here are a range of items of decidedly dodgy provenance that Radicals might seek or provide to their Acolytes to use.

The last major rules additions here is the fun option of an Inquest – providing a detailed system to support having player characters proactively deciding to investigate a particular target, as opposed to the assumed mode of play where you’re showing up reactively in response to something odd and/or treasonous happening and you aren’t sure who your target is going to be. This may be a bit mechanical and game-y for some people, so I’d be inclined to use it mainly as a downtime system, with major confrontations in the Inquest played out in uptime, and work on the basis that if the aim of the Inquest is actually undeniably accomplished in uptime then the players should get the victory regardless of the number of investigation points they accumulated.

The Askellon-relevant stuff here includes a range of ideas which you could happily transfer to other sectors if you wish – there’s writeups of various worlds which provide bespoke rules for characters claiming them as their homeworld, for instance, and you could borrow those rules and aspects of their background and the associated adventure ideas whilst trimming away or replacing the Askellon-equivalent stuff. That said, the Askellon material here really sells me on using the sector as a locale for a campaign, since it does a great job of making it seem fun to play in a sector where the Inquisition is thin on the ground, tends to operate covertly, and has a bad relationship with the local authorities, rather than the Calixus Sector where the Inquisition is more entrenched.

On the whole, Enemies Within pretty much offers the best of what 1st edition Dark Heresy offered up in The Radical’s Handbook and Inquisitor’s Handbook, with perhaps less detail but with greater clarity and efficiency, plus various extended thoughts on how a Hereticus-focused campaign can work (especially when considering how various levels of Subtlety come into play there). 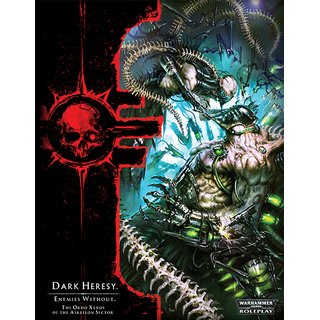 The Ordo Xenos-focused supplement can largely content itself with following the approach of Enemies Within, with a focus on alien-related options. Whilst it doesn’t go so far as to open up the possibility of playing alien allies as regular Acolytes, it does give Radical sorts the option of calling in various alien mercenaries as reinforcement characters, as well as offering various bits of alien tech. Some expansion of the vehicle rules is provided (presumably because there was space), as is some alien tech and a quite nice system for spending time investigating Xenos mysteries – ranging from deciphering an alien language to conducting an autopsy on a dead Xenos – in order to gain useful little advantages against aliens of that type.

The main attraction, though, consists of the expanded details available on Orks, Kroot, and especially on the various types of Eldar – all of whom make great opponents appropriate to the power level of a Dark Heresy game. It feels like the Askellon-specific information here is less evocative, perhaps because intrinsically an alien-focused campaign is going to tend to be more outward-looking than inward-looking anyway, though there are details on how the trade an alien artifacts works here. 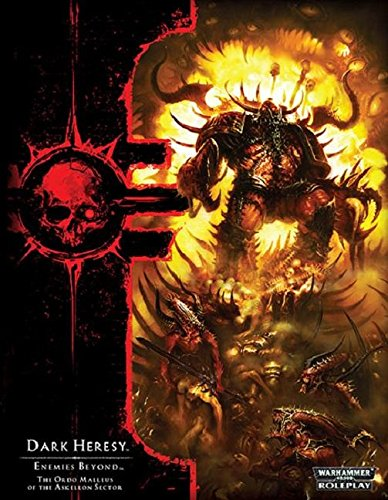 This follows the same formula and has such an absolute overlap of personnel with Enemies Within and Enemies Without that I suspect all three books were written at once and then chopped up into these three. Obviously, this is the Ordo Malleus, which means that the Radical tools and adversary types covered here are by far the spiciest – you get your various flavours of Chaos nasty, plus daemonic artifacts and weapons, plus daemonhosts, plus rules for making dark pacts. It’s fun for all the family, provided that the family considers the rending of their souls to be fun. For the most part it is about the most predictable of the volumes in terms of what it covers (Chaos books having largely been restatements of Realm of Chaos for a good while), but it covers it interestingly enough and completes the triptych neatly. It’s surprisingly light on Grey Knight stuff, though. 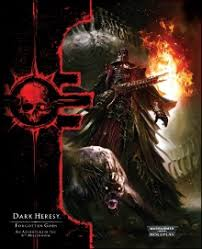 I couldn’t get into this, possibly because it just gives a bad impression to kick off with; before you get into the first part of the campaign, you’re presented with a long rambly discussion of what to expect from it, to an extent which made me expect a truly tediously linear railroad, and flipping ahead the campaign does seem highly railroady. It’s meant to be playable after the sample adventures in the core book and GM kit, though most of the notes on how to incorporate the action of these seem designed to get you to the exact same outcome regardless of what happened there, which is annoying.

But what particularly bugs me is a box towards the end of the second chapter, detailing suggestions for allowing the PCs to win the climactic fight. Not only does the box declare that the adventure is designed with the assumption that the PCs will win every single fight (if you’re going to have them auto-succeed why play through the game at all?), but it also says that this particular fight is vital for the PCs to win, because if they get defeated they’ll end up dying when the ship they’re on gets crashed into a planet by the baddies.

Now, call me a hardass, but I tend to think that “the party dies bleeding to death in a starship that gets crashed into a planet after a climactic fight, causing a major disaster which the next party has to clear up” is an absolutely fine turn of events for a Dark Heresy campaign, either to conclude it or to herald the start of a new adventuring party. If anything, the fact that this fight is given its own special text box on this subject is downright weird. If this is the fight it is least acceptable for the PCs to lose, does that mean it’s more acceptable for the PCs to lose a boring, avoidable fight where there’s no great consequences for them losing?

One would tend to think that the opportunity for your death to be accompanied by a blaze of glory on a cosmic scale would make character death more acceptable, not less. One would also tend to think that if failure in combat is unacceptable to the design of a scenario, you should probably take all the combats (or at least all the difficult combats) out of that scenario to begin with. Not impressed, gang. 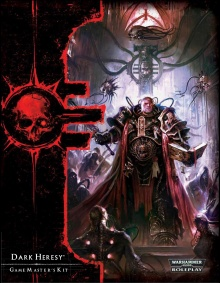 The screen is quite pretty, but as is usually the case with Fantasy Flight’s screens the panels are in portrait orientation rather than landscape, the latter being objectively superior for screen purposes (since you can partition off more table space with the same number of panels and your eyeline to the players is much less disrupted). The adventure packaged with this is nothing to write home about, whilst the notes on designing villains are OK but not enormously insightful.