The Empire is often the focus of WFRP campaigns, and for good reason; whilst a British RPG publisher producing a fantasy world that was basically a twisted funhouse mirror version of our own world back in history times might have been expected to default to medieval England, Games Workshop elected to take the world less travelled and centre the gameworld on this strange take on the Holy Roman Empire circa the early Renaissance. (Albion, in the WFRP setting, is a near-irrelevant dirt pile haunted by horrors – like 2000 AD, Alan Moore, and Michael Moorcock, they were riding a wave of 1980s British fantasy that was out to burst the bubble of jingoistic British exceptionalism, and it warms the patriotism-despising cockles of my globalist Remainer heart to see it.)

For WFRP purposes, the main sources of lore on the Empire during 1st edition days consisted of the brief writeup in the core book and the welcome additional detail provided in The Enemy Within – later compiled in various ways, the most recent and easily-available version of which is the Hogshead Enemy Within Campaign Volume 1: Shadows Over Bögenhafen, which compiles the original Enemy Within set and the full-length Shadows Over Bögenhafen adventure, which is now on sale as a PDF on DriveThruRPG thanks to Cubicle 7. The second edition, which due to Games Workshop requirements takes place after the “Storm of Chaos” metaplot event, required an update to this material, and the main delivery mechanism for this update (aside from the core WFRP2 rulebook) was Sigmar’s Heirs. 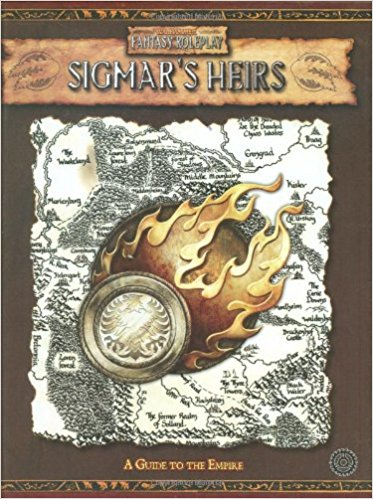 Like the vast majority of the WFRP2 line, Sigmar’s Heirs was developed by Green Ronin acting as hired guns for Black Industries, at the time Games Workshop’s in-house RPG imprint. By and large, it takes the general approach of the material fleshing out the Empire in The Enemy Within, expands on it, and updates it to take into account the progress of history – though the Storm of Chaos isn’t touched on as much as you’d expect. You might suspect that the designers shared the fanbase’s reservations about running post-Storm of Chaos and the shift in tone that involves (with Chaos having gone from a hidden threat bubbling up under the surface and generally not known by the majority of citizens to a threat that everyone knows about because they’ve just fought a massive war against Chaos and won). So far as I am aware, that’s actually the case – certainly if you want to ignore that the Storm of Chaos happened, you absolutely can do so with this book. 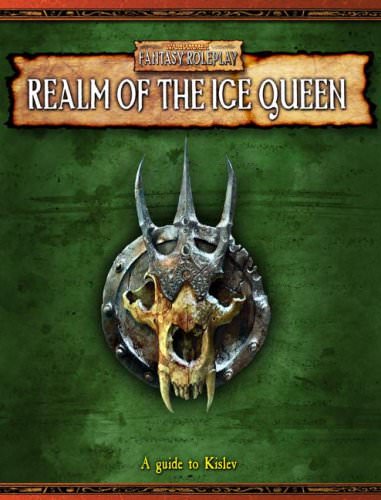 Much of the rest of the WFRP2 supplement line either consisted on fat tomes on major metaphysical topics or supplements giving a Sigmar’s Heirs-level treatment to non-Imperial cultures in the setting – whether those were human nations like Bretonnia or Kislev or nonhuman groups. Realm of the Ice Queen is an archetypal example of this brand of supplement, giving a full overview of the realm of Kislev (roughly equivalent to the Kievan Rus) – including its frosty religion and chilly brand of local magic. As with Sigmar’s Heirs, it’s absolutely stuffed to the gills with delicious flavour and is as good a presentation of the canonical lore as any. 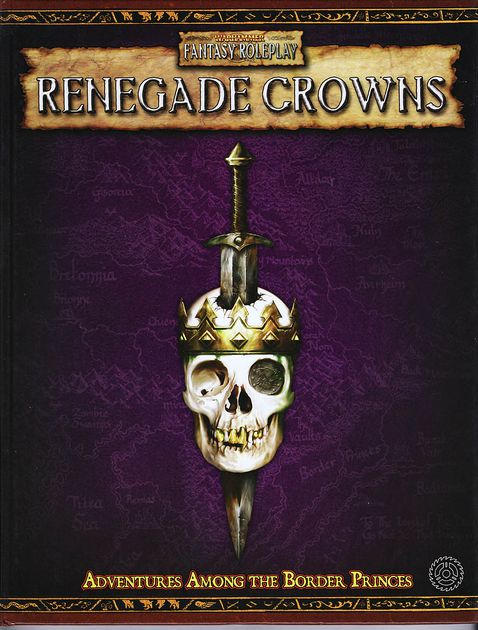 A major departure was Renegade Crowns, the supplement covering the Border Princes region (roughly corresponding to the Balkans). In the Warhammer world this is a place of constantly shifting control, with warlords scrapping over small plots of land all over the place. Thus, designer David Chart took a rather different approach with it – rather than attempting a doomed effort to provide a “canonical” take on the Border Princes which, if it were being true to the concept, would become instantly out of date, he instead provides a full system for designing your own little region of the Border Princes for the purposes of running a sandbox campaign in there, either for classic exploration and adventuring or for the more ambitious approach of trying to carve out your own miserable little barony in there.

The end result is rather magnificent – it’s like a mashup of AD&D‘s World Builder’s Guidebook with the domain management system from the D&D Rules Cyclopedia, except twisted for the purposes of the grim peril and sardonic pessimism of the WFRP setting. Quite simply, setting up your own little fiefdom in the Border Princes region is not a glorious or wonderful thing – it’s an act of hubris which will bite you in the ass, but the road to that ass-biting will be decidedly exciting. 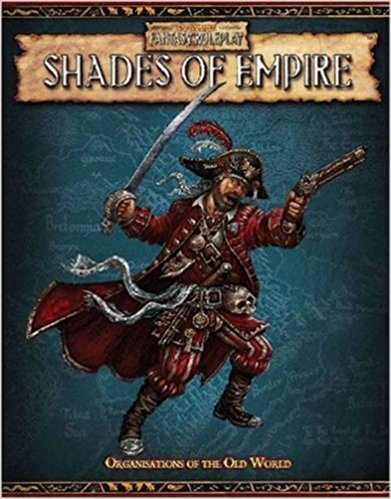 The last significant setting-expanding supplement for WFRP2 was Shades of Empire, which emerged under the auspices of Fantasy Flight Games (who had picked up the licence after Black Industries was shut down) but based on the names involved I suspect it had been largely developed by Green Ronin when the deal went down. This returns to the Empire to offer inside details on a range of groups and organisations and subcultures. You have entirely legitimate and carefully regulated organisations like the Imperial Navy, you have disorganised but culturally unified subcultures like the dockers of Altdorf, you have secret societies and revolutionary groups who must work out of sight lest they get shut down by the authorities, you have vigilantes and profiteers and even a sort of Masonic community self-defence organisation for Halflings.

What you refreshingly don’t have is a big mass of Chaos cults. All of these organisations have their secrets and their less well-known aspects – their entries helpfully divide out the information which you can fairly freely give to players and that which players probably shouldn’t get for free – but whilst I’m not going to throw out spoilers by giving precise proportions, nicely the majority of them genuinely don’t seem to be corrupt Chaos cults. That doesn’t mean that they are safe to associate with or are even good people, but they do represent a nice range of alternate groups to tangle with if you want a change of pace from all-Chaos all the time, as well as adding a nice level of additional depth and nuance to Imperial culture in general.

4 thoughts on “The Empire Renewed, the Old World Refreshed”