Thousand Years of Night is the shiny new supplement for Vampire: the Requiem focusing on playing elders. This is a smart love for the purposes of continuing the agenda of the 2nd edition core book (AKA Blood & Smoke: the Strix Chronicle) in terms of allowing Requiem to be its own thing rather than existing in the shadow of Vampire: the Masquerade. Masquerade had a very particular take on elders as being the uber-powerful vampire Illuminati, and this was largely reflected in the guidance offered for playing them in the Elysium supplement. On top of that, both the metaplot and various published adventures and setting books leaned heavily on the “elders pulling everyone’s strings” trope. If Requiem‘s elders could be distanced from this interpretation, that would establish some clear water between the two games. 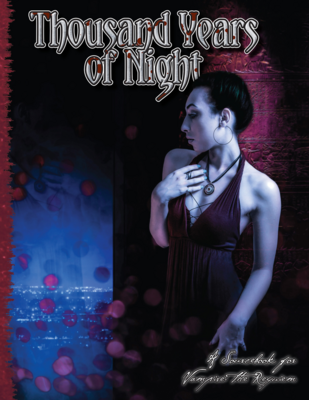 Broadly speaking, Thousand Years of Night succeeds at this. Elders here are still quite powerful – they get a nice stack of Experiences depending on just how Elder they are at character gen, and of course you also have some nice new powers for them and guidance on what you can do with attributes and skills beyond the human maximum. At the same time, they aren’t the full-on vampire Illuminati they are in Masquerade – the much more fragmented nature of Kindred society in Requiem doesn’t lend itself to that, for one thing, and for another they aren’t so radically beyond other vampires in capabilities as to dominate the upper echelons of vampire politics.

What they are instead are people displaced far in time from their era of origin, and whilst they are more able than Masquerade‘s Elders to keep up with the times (in fact, odds are they’ve forgotten many of the archaic skills they used to have as they simply ceased using them and learned new skills in turn), they do need to face the problem of maintaining Touchstones when they’ve already seen entire generations of ’em fading into the dust. Out of the rules stuff here, perhaps the best stuff is the consideration of how Requiem‘s Touchstones system changes once you’re dealing with Elders of a particular vintage. You know that whole “Elder who becomes obsessed with someone because they remind them of someone from their tragic past” trope? You can do that way up to the hilt here.

You also get some consideration of how Elders interact with covenants, as well as covenants and conspiracies which primarily consist of Elders. (For instance, there’s a clique of Elders who specialise in a callous but effective method of Strix-hunting.) The book closes by rounding out the range of supernatural adversaries extant in the setting, following the lead of the main book of providing more examples of blood-drinkers and corpse-eaters from classical myth, as well as depicting some Elders and Methuselahs who’ve gone well off the deep end. For wilder character concepts, there’s also details on Clans which are supposed to have gone extinct, but which Elder characters could still viably be members of.

On the whole, I’d say that Thousand Years of Night does what Requiem supplements need to do at this point in time – expanding the range of play available in Requiem without obscuring or cluttering up the distinct vision and voice of the game line.