5th Edition D&D has been extremely careful about its pace of expansion. Part of that seems to come from resources, of course – Wizards of the Coast no longer throw the amount of personnel at the tabletop RPG that they did back in the 3.X or 4E days. It also, however, seems to have arisen from a rather laudable attempt to avoid the runaway bloat, character optimisation and bad-faith builds that proliferated like wildfire in the 3.X days, or the deeply embarrassing process of radically re-engineering basic game systems on a supplement-by-supplement basis that happened to 4E (with its regular overhauls of the skill challenge system and constant tinkering with the encounter maths). 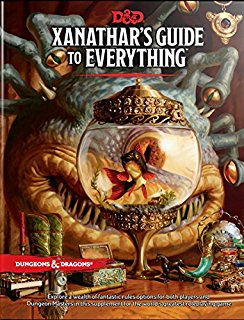 For 5E, Wizards seem to have taken the approach that slow and steady wins the race. New official expansions come out gradually. For Adventurer’s League purposes, they’ve taken the extremely sensible decision of declaring that legal character builds can be based only on the Player’s Handbook and one other official source (not including Unearthed Arcana), with the result that they’ve actually made it possible to produce halfway balanced material – it would quickly become impossible to balance every new 5E release against every single other new 5E release, but if you just have to balance each new supplement against the core material then the job becomes halfway viable.

That isn’t to say we’ve been starved for material, though. A regular highlight of the official D&D website since 5E’s release has been Unearthed Arcana, a string of articles offering rough versions of additions to the system for widespread playtesting and feedback. These have ranged from simple additions like new subclasses or revisions to existing subclasses to major new concepts, like a psionics subsystem.

Some of the Unearthed Arcana articles seem destined to form the backbone of specific themed future supplements – for instance, it would seem natural to include a finalised version of the 5E psionics rules in a 5E release of Dark Sun. But what of the material which doesn’t naturally fit into one supplement or another, but which was well-received enough that it doesn’t deserve to languish as a website article and deserves that extra development pass that could really make it shine?

Xanathar’s Guide to Everything seems to be the solution – drawing heavily on previous Unearthed Arcana articles, with a full process of updating and a bunch new material sprinkled over the top besides, it feels like this is to 5E what Unearthed Arcana was to 1E. The downfall of the original Unearthed Arcana supplement was that it was just sort of thrown together and tossed out in the wild without polishing – not that rigorous playtesting and feedback-gathering was a major part of the game design process at the time. Xanathar’s Guide manages to provide all the joys of the original Unearthed Arcana in terms of opening up new vistas in the game without falling into the same pitfall, and without overcomplicating the heart of 5E.

One advantage that Xanathar’s Guide has over the original Unearthed Arcana was that 5E was really quite ingeniously designed from the ground-up to accommodate nice little additions here and there that add value to the game without unbalancing it or otherwise throwing its system ecosystem out of whack. This is immediately evident in the player-facing section of this book, which takes up a slice over half of it and largely consists of a glorious cornucopia of new subclasses. Yes, there’s other bits too – like a range of background elements you can roll on or use as inspiration for thinking about your character’s past and motivation (both in terms of their interaction with their class and, at the end of the section, in terms of providing something approaching a lifepath system for D&D) – but it’s the new subclasses that provide the meat here, and of course the subclass stucture in 5E allows these to be added nicely and organically. The subclasses are by and large a lot of fun and well-developed; my main gripe is the Inquisitive, which I think has a silly name (why not “Investigator”, if “Inquisitor” seemed too loaded?), whilst my favourite might be the Hexblade, which is the warlock specialisation for those who basically want to be Elric complete with their very own Stormbringer.

The GM-facing section, by comparison to the very class-focused player’s section, is a bit more of an odds and sods collection; the book is careful to emphasise that these are optional tools to use if you want a mechanical means to adjudicate something, but aren’t essential additions. Whilst not essential, they’re certainly very useful – you have notes on how to adjudicate areas of effect on a grid, for those using that, some nice expanded discussion of random encounter tables, and some neat suggestions for how to handle downtime actions – inspired, perhaps, by the contributions of Adventures In Middle-Earth. The book is rounded off with some nice utility bits – a few new spells, an interesting article on how you might go about running a shared campaign with multiple GMs running games in the same world, and a big fat set of tables offering names from a wide range of human and nonhuman cultures, which could be really handy at the table if you want to name an NPC in a hurry and your mind’s drawing a blank.

As far as Xanathar the beholder itself, its little comments barely register and really aren’t an especially prominent feature of the book; I suspect that the branding is simply for consistency with the presentation of Volo’s Guide to Monsters.