The Lion and the Lily is the Ars Magica 5th Edition supplement detailing the Normandy Tribunal, which corresponds to the northern half of modern-day France. This is a place where the mundane authorities are starkly divided between the King of France and the King of England, whose extensive possessions in Anjou and Aquitaine mean that the extent of French rule is much more limited than we are used to thinking of it as being. 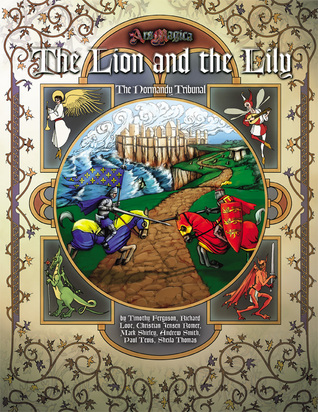 To provide scope to allow player characters to interact with this fascinating bit of history, and to account for the fact that the region is one of the most highly populated in Europe at the time so avoiding contact with the local population would be difficult, the Tribunal is presented as being reasonably permissive when it comes to interactions with mundanes, to the point where if these interactions don’t actually result in magi suffering harsh reprisals from mundanes the attitude of the Tribunal is “no harm, no foul”. This makes it an excellent place to consider for your Ars Magica game if you aren’t up for a stiflingly strict interpretation of the Code of Hermes (and let’s face it, who is?).

Other cultural issues further cultivate the unique flavour of the Tribunal. A shortage of vis sources has knock-on effects on the Hermetic economy, including the development of a system of liege and vassal Covenants paralleling secular feudalism as practiced in the realm as well as providing a further reason to go easy on interactions with mundanes (since these will sometimes be necessary to keep the vis flowing). Furthermore, the craze for troubadour’s tales has prompted mages to consider such things as Hermetic tournament and adventurous mages errant – and of course this is Mythic Europe, so King Arthur and his associated legends were real and had extensive ties here.

Offering a brace of Covenants to populate your campaign with whilst leaving space for PC covenants, the supplement also makes sure to avoid keeping things too static, with various issues potentially about to erupt that could change the face of the Tribunal forever. Had I not gone with the Provençal Tribunal for my now-demised Monday evening Ars Magica game, I’d have been very tempted by The Lion and the Lily.