Though Call of Cthulhu has been adapted to an impressive range of time periods, three tend to get the most attention, not least because they were offered as alternate options in the core 5th edition and 6th edition rulebooks. The 1920s was the default setting of the game for early editions, and is still the time period most commonly associated with it. Modern day material for the game is also plentiful, not least because the present day is (hopefully) a familiar place to all participants in the game.

The poor cousin of the three major time periods is the 1890s setting; in fact, it’s no longer offered as a core setting in 7th Edition, though conversion notes are provided in the Cthulhu Through the Ages supplement. I suspect that this is because the 1890s setting is different enough from the 1920s era to require a bit more in the way of support material and research to make the distinction clear. For this review I’m going to look at two supplements offered in the past to provide more meat for the bones of the 1890s in Call of Cthulhu, one official release from Chaosium and one third party release from Pagan Publishing. 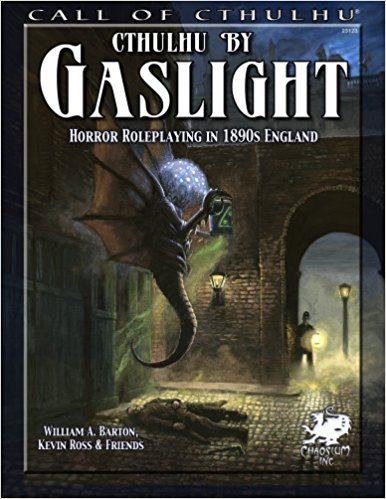 The first version of this seminal Call of Cthulhu supplement was penned by William Barton and came out in 1986 as a boxed set, with a second edition reformatted as a softcover supplement emerging in 1988. The version I am reviewing is from 2012, and this third edition has been substantially revised and expanded by a team led by Kevin Ross.

The kernel of the Cthulhu By Gaslight idea is sound – after all, stories by Chambers, Machen, Wilde and others from this era were all prized by Lovecraft and influenced the growth of the Mythos. However, William Barton is an unabashed Sherlock Holmes fan, and spent a lot of energy in the original versions of the supplement trying to showhorn Holmesian content (and Holmes himself) into the Mythos. This I can only consider a mistake: tonally speaking, Holmes doesn’t fit at all, not least because Lovecraft’s fiction hinges on the idea that there comes a point on the cosmic scale where human rationality and intuition breaks down and is of no use to us, whilst the very foundation of the Holmes canon is the idea that deductive reasoning can solve all quandaries.

Fortunately, for the 2012 third edition of the supplement Ross makes the wise choice of dialling back the Holmes stuff substantially. He’s still there, tucked into a little chapter providing game stats for various figures from Victorian-era fiction, with Captain Nemo, Count Dracula, Jekyll and Hyde and all the rest keeping him company, but whilst it’s nice to have the option of going full League of Extraordinary Gentlemen, for the purposes of most campaigns these characters need not exist.

Though some things are subtracted, an extensive amount of material is added. The assumption of the book is that you are probably going to base your Gaslight campaign out of Victorian London, with investigators mostly from the upper or middle classes because working class people tend not to have time for investigation. This approach does risk drifting into conflating the interests of the class structure and repressive social order of Victorian society with the interests of humanity in general, and the supplement doesn’t really go that deep into the injustices of the time or the abuses of colonialism – but it does provide a vivid set of resources when it comes to bringing the time period to life in general, particularly in the UK, and more particularly in London. This does at least reflect much of the source material, which Ross’s revision does a lot to bring out; in particular, one of the new investigations added to the book owes a major debt to Arthur Machen, who is a much more apt source of inspiration for Mythosy mayhem than Arthur Conan Doyle. 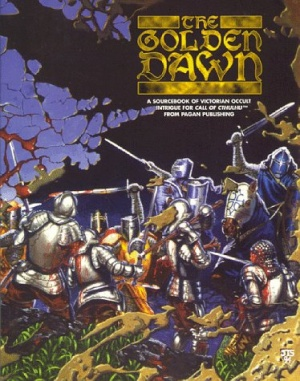 Speaking of Arthur Machen, this Pagan Publishing supplement delves deeper into the Hermetic Order of the Golden Dawn, the most famous occult secret society of the Victorian era which included Machen and numerous other unexpected figures among its number. This was one of two major supplements that the Pagan crew released in 1996; the other one was the legendary Delta Green, which was a monster hit thanks in part to lucky timing when it came to tapping into the zeitgeist (X-Files fever was at its peak, and though the earliest Delta Green articles in The Unspeakable Oath fanzine predated The X-Files the popularity of the series certainly didn’t hurt Delta Green), in part due to it simply being a really excellent supplement.

Next to that major success, The Golden Dawn was rather overshadowed, which is a bit of a shame. Some blame may fall on Chaosium here; at the time they had allowed Cthulhu By Gaslight to fall out of print, and whilst rudimentary support for 1890s investigators was offered in the 5th Edition core rulebook it mostly consisted of tweaks to the skill list and the equipment list – it didn’t include all the setting material of Gaslight which helped bring the 1890s to life. Whilst Pagan Publishing did get permission from Chaosium to reprint a few bits from Gaslight here and there for the benefit of Keepers who didn’t have access to it, it still meant that they were bringing the supplement out at a time when 1890s-based Cthulhu gaming was out of style.

The irony of Delta Green overshadowing The Golden Dawn is that both supplements represent a very similar approach – namely, they exist to provide an organisational framework to bring investigators together and motivate them to investigate mysteries in the time periods they focus on. By default, the supplement assumes that the Golden Dawn, whilst teaching occult principles with real, viable applications, is not in and of itself contaminated by the Mythos. (A chapter offers various ways in which Mythos matters might intrude into the history of the Golden Dawn.) This allows the Golden Dawn to be a sort of safe harbour for player characters, as well as a means by which they can learn various spiritual faculties as they advance through its ranks. (A nice system is provided to model this without requiring extensive knowledge of the Golden Dawn’s extremely dense and ornate occult teachings.)

These axioms in turn suggest a particular style for Golden Dawn campaigns – namely, something reminiscent of the genteel occult detectives along the lines of Hodgson’s Carnacki the Ghost-Finder or various Dennis Wheatley novels (or, for that matter, some of the occult detective stories Golden Dawn hellraiser Aleister Crowley was known to write from time to time). The real-world history of the Golden Dawn is already rich and packed with incident enough that you don’t really need to add Mythos complications to the Golden Dawn itself to keep things exciting, and the cast of figures who were involved in it is broad enough to inspire all sorts of potential interactions between the player characters and the prominent and controversial figures of the day.

This certainly seems to be the style take in the sample adventures, which are a mixed bag in terms of overall quality but have some fun ideas in there. My main complaint about them is how the first one sets itself contradictory goals; it wants the player characters to treat William Butler Yeats as a respected senior member of the Golden Dawn who they look up to, but at the same time wants them to take the lead in coming up with magical solutions to the problem posed rather than relying on Yeats telling them what to do. In my experience, if players have bought into the idea that Yeats is their boss, then they will naturally tend to seek his guidance first – so if you succeed at one metagame goal in this scenario you’ll probably fail at the other or vice versa.

Kevin Ross would contribute a fair amount of material to this supplement, which makes his subsequent revision of Cthulhu By Gaslight all the more appropriate – but he’s credited as Alan Smithee, which is of course how directors once upon a time would have themselves credited on a movie they didn’t want to claim credit for. To my knowledge, we’ve never had an explanation as to why this would be the case; certainly, The Golden Dawn isn’t an outright embarrassment by any means, but perhaps there was some sort of dispute over creative direction that isn’t apparent from the final product.