One of the advantages that Call of Cthulhu gains from being based on the Basic Roleplaying Chaosium house system is the adaptability of the system in question. Though its basic parameters were originally set up for the purposes of RuneQuest, the system has proven remarkably adaptable over the years. Generally its stat-and-skill core is a bit flavourless, but precisely because of that flavourlessness it’s amenable to having appropriate flavour added – both from the selection of skills on offer and on subsystems like Call of Cthulhu‘s sanity rules, Stormbringer‘s demonology and alignments, or Pendragon‘s passions.

The upshot of this is that it’s remarkably easy to transfer Call of Cthulhu into different time periods or even more divergent settings – witness to this is the Cthulhu Through the Ages supplement for 7th Edition, which provides quick and easy conversion rules for a vast range of time periods and stranger settings. Largely it comes down to a matter of changing up the skill list to suit the knowledge and aptitudes of the era, providing an appropriate equipment list, and providing a set of appropriate occupations for the era of play.

For this article I’m going to take a look at three very divergent alternate approaches to Call of Cthulhu. Two of these are officially-published alternate settings put out by Chaosium; the third is a licensed product from Sixtystone Press which is perhaps the most imaginative departure from the norm. 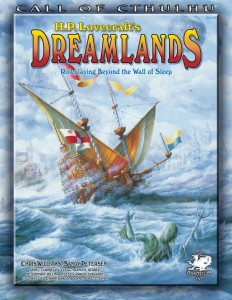 This is a review of 2011’s fifth edition of the Dreamlands supplement. Some form of it has been a feature of Call of Cthulhu for quite some – the original was penned by Call of Cthulhu originator Sandy Petersen back in 1986, whilst recent editions have been comprehensively updated at the hands of Chris Williams.

Williams’ updates prove to be a bit of a problem to me, to be honest. In his introduction he asserts that he’s chosen to inject more Brian Lumley influences and less Lord Dunsany stuff in to his presentation of the Dreamlands, on the basis that Dunsany didn’t really write Dreamlands material but was producing his own fictional settings whilst Lumley wrote a whole series of overtly Dreamlands-set stories and novels. The introduction here gets a little defensive in tone, as if Williams were fully aware that people were loudly advocating for a Dunsanian take on the Dreamlands and he was equally aware that he was going directly against them.

Here, I think Williams may have been misreading what people were actually asking for. Most people, I think, fully understand that Dunsany’s Pegana and Lovecraft’s Dreamlands are two distinct settings, and bodily transposing places and creatures and characters from the one to the other wouldn’t necessarily be an improvement. However, equally it is generally understood that Lovecraft’s Dreamlands stories were written under the powerful, nigh-overwhelming influence of Lord Dunsany. People don’t want Dunsany from their Dreamlands in terms of the trappings, they want Dunsany in terms of the mood and atmosphere and overall logic.

Williams’ embrace of Lumley’s material especially exacerbates things because Lumley definitely does not have a Dunsanian approach to the setting – his Dreamlands series is basically sword and sorcery in approach. Moreover, Lumley’s setting additions are crafted through that particular lens and so inevitably bring a bit of that flavour into the proceedings. This is a problem for the supplement because we already have plenty of sword and sorcery RPGs, including some Basic Roleplaying-derived ones, so we don’t really need another one – and if a playing group is in the mood for some sword and sorcery action they are almost certainly going to just play one of those rather than playing Call of Cthulhu.

(Actually, I have known people to use especially sword and sorcery-tastic excursions into the Dreamlands in a Call of Cthulhu campaign as a palette-cleanser, but I think this is a basically misguided move. Cosmic horror and sword and sorcery are too distant in mood and feel; incorporating both into the same campaign just dilutes both and muddles things.)

The rather sword and sorcery approach to things means that the book largely consists of a gazetteer of Dreamlands locations, monsters and spells, and whilst there’s the Dreaming skill which allows people to shape the dream around them, it’s just tossed out there without much discussion – you’d think such a distinctive concept would scream out for a deeper treatment, maybe even an entire chapter discussing it, but you more or less just get the skill description and that’s it. (Compare to Dreamhounds of Paris for Trail of Cthulhu, which – at least in the campaign we’ve been playing – seems to begin with dream-shaping as the distinctive calling card of the Dreamlands and progress from there.)

Where the distinctive properties of the Dreamlands are invoked, it’s just to make problems nobody actually wants to throw into their games. For instance, in principle characters with certain levels of skill in especially modern skill categories simply can’t dream their way into the Dreamlands – except if you are going to include an extensive Dreamlands section in an investigation, are you really going to lock some of the player characters out of it? Of course you fucking aren’t.

The decisions made about what to expend page count on here are also a bit off. There’s an extensive chunk of pages given over to an extremely detailed summary of The Dream-Quest of Unknown Kadath. Admittedly, that novel is hard going – it’s a completely unpolished first draft that Lovecraft knocked out as practice in writing longer stories and then left alone without attempting to publish it, so it’s no surprise that it’s very rough around the edges. However, what actual benefit does this summary offer Keepers in terms of running a Dreamlands campaign? Pretty much none – all the details about locales and characters that crop up there are just repeated in the gazetteer section anyway.

On the balance of this, I think it is no surprise that in general subsequent writers for both Chaosium and third parties have tended to use the Dreamlands sparingly as a means of spicing up Call of Cthulhu investigations rather than as the primary setting of a campaign. And the thing is that if you want to do that you really don’t need this supplement – the core books plus any knowledge you’ve personally picked up from reading Lovecraft will do. I have little doubt that sooner or later the new Chaosium will produce a new Dreamlands supplement for 7th Edition, and I hope they take the opportunity to comprehensively revise it so as to make something more distinctive and atmospheric out of the material. 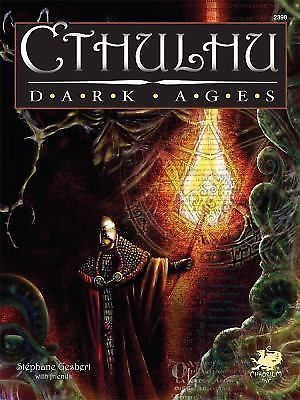 As the title implies, this is a historical Call of Cthulhu setting based during the European Dark Ages. The odd decision was made to put this out as a self-contained RPG, which I think was an error – its short page count (it’s substantially slimmer than the Call of Cthulhu core) means that once the system information is delivered there isn’t as much space for setting-specific sauce as you might hope.

I suspect the reason behind the is that this is actually the first English translation of a German-language Call of Cthulhu offshoot called Cthulhu 1000 AD, published by Pegasus Spiele and penned by Stephané Gesbert. It is a shame (though not surprising) that Krank-regime Chaosium ended up giving a supplement-sized treatment to what probably deserved a core book-sized delivery, particularly since there’s flashes here of an interesting spin on the Mythos, developing strands like the whole Ancient Ones thing from Through the Gates of the Silver Key that the mainline game hasn’t concentrated on so much and weaving in folkloric figures like Lilith. This could probably do with a second edition. 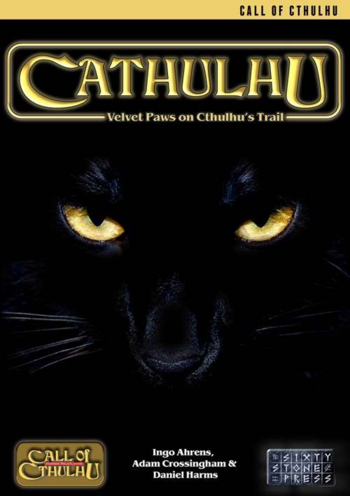 Not to be confused with the standalone game Call of Catthulhu, this supplement has a similar concept but is rooted in the Call of Cthulhu system and has a claim of being the original, since it’s an English translation of material that originally appeared in a German Call of Cthulhu fanzine back in 2001-2002. The idea is simple: Lovecraft’s most endearing personality trait to modern sensibilities was his love of cats, cats have a significant role in the Dreamlands stuff and aren’t altogether irrelevant to his Mythos material, why not play Call of Cthulhu adventures where all the investigators are adorable kitties?

Here breed takes the place of occupation when it comes to differentiating characters, various cat tricks are available to give them an edge, and sanity loss results in increasingly feral behaviour. The ability to slip between the waking world and the Dreamlands or to call on the powers of Bast allows cats to punch above their weight, and as we all suspected cats understand human speech and writing much better than we expect. (The text tends to refer to humans as “Can Openers”.)

On the whole, I find myself quite charmed by Cathulhu; as far as material for a change of pace goes it feels more authentically Lovecraftian than the current Dreamlands supplement, and the sweetness of the “play a cat” idea doesn’t feel like it necessarily counterbalances the horror of what investigative cats may end up facing. After all, if there’s any RPG that bears out the idea that curiosity killed the cat, it’s Call of Cthulhu.

4 thoughts on “Different Facets of the Shining Trapezohedron”