The Tekumel setting, designed by Professor Muhammad Abd-al-Rahman Barker, has the distinction of being the oldest published roleplaying game world. (Though Greyhawk lent its name to the first D&D supplement, that was mostly a collection of rules and didn’t really include any setting information as we understand it.) It did not originate as one – like Greg Stafford’s Glorantha, it had been developed by its creator for quite some time before being used for gaming purposes, Barker having dreamed it up in his middle school years in the 1940s and been developing it in subsequent decades, though he did have some exposure at the time to the wargaming hobby and had been producing home-made Tekumel miniatures armies.

However, once Barker crossed paths with Mike Mornard, one of the early playtesters of Dungeons & Dragons, he became acquainted with the nascent RPG format and recognised in it a way to game in Tekumel which appealed to him greatly and was nicely compatible with some of the other gaming activities he’d applied to it. It was not long afterwards that the original Empire of the Petal Throne RPG emerged through TSR, and every so often someone else tries to do a Tekumel RPG.

There’s a small but faithful fan community around the setting, but it’s never been a runaway commercial success. This may come down to two factors: the setting material has a fearsome reputation for being extremely dense, and the setting itself is pretty distant from what Western fantasy audiences have come to expect. For one thing, it takes extensive inspiration from Mesoamerican and South Asian cultures; for another, it’s not so much straight fantasy as a Vancian science fantasy setting.

The planet of Tekumel is, in fact, a terraformed world which was discovered 60.000 years after the present day and conquered by humanity, its old ecosystem cleared off, its former rulers isolated in reservations, and the planet repopulated by a mixture of human beings and various alien allies and client races of humanity (as well as alien foes of humanity infiltrating to do mischief). Disaster fell when for reasons unknown the Tekumel star system was snatched away into a pocket dimension in which it was the only matter in existence. Cut off from the interstellar empires that sustained it, high-tech civilisation on Tekumel crashed, and what you have today is the strange thing that arose after humans and their allies rebuilt in the face of that disaster and the re-emergence of their various enemies – including the justifiably upset original owners of the planet.

That’s a wild concept that has various implications in play (many of the “monsters” and intelligent nonhumans of the game are various sorts of alien, for instance), but it needn’t be unapproachable. For my money, you can get a pretty good handle on Tekumel just with two sources – the original Empire of the Petal Throne for the broad brushstrokes and the Tekumel Source Book from Swords & Glory for the fine detail.

Empire of the Petal Throne 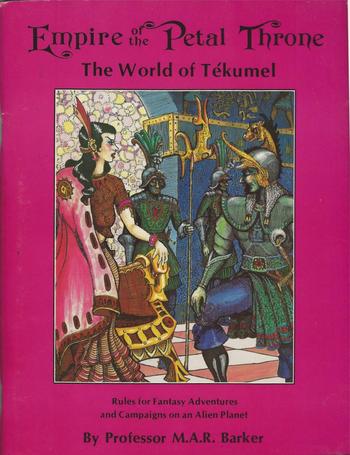 The first and probably most famous of the Tekumel RPGs was put out by TSR as a boxed set in 1975; that original is now a collector’s item, but fortunately various reprints from over the years and an official Barker estate-endorsed PDF release mean that there’s no need to pay collectors’ market prices if you just want to read it. My copy is a single-booklet release that was put out by Different Worlds magazine.

Emerging only a year after Dungeons & Dragons itself, it is no surprise that the system here is based heavily on OD&D – stats are rolled on percentiles instead of 3D6, which was a variant a lot of early TSR RPGs indulged in, but otherwise its basic principles are a reasonable interpretation of the white box set. In fact, in terms of clarity of explanation and overall organisation it’s much better than OD&D itself and conveys the assumed model of a Tekumel campaign nicely.

Tekumel over the years has gained a reputation of being a very unusual setting which is difficult to grasp, and what’s interesting about Empire is that Barker himself clearly realised what sort of reception it would get; early on he directly addresses the question of whether it’s possible to run a Tekumel game if you are not him, and impressively given that this is the first RPG product specifically describing a game setting at all I think Barker by and large cracks the problem of conveying a setting through rules. There is a big fat background section at the start which is a little bit of a chore to get through, but past that the majority of setting information is conveyed through the discussion of the system.

For instance, in discussing how level progression is tied to social standing, the game conveys the assumed campaign structure where PCs start out as recent arrivals in the grand city of Jakalla, confined to the foreign quarter unless they are doing a job for a citizen, then as they level up they eventually earn citizenship and get more freedoms and prominence. Not only does this setup mean that players learn about the setting even as their characters learn about it, but it also immediately conveys to us a host of ideas about Tsolyani society (like earned citizenship) smoothly and easily. Similarly, the fact that slave prices are provided in the hireling details section, the specific details of spells, magic items, gods and nonhuman creatures, and even the travel rules convey interesting and useful information about the setting at the time you’d need to know about it.

The fact that the setting had enjoyed years of development before ever a game was associated with it means that the details here are rich and evocative but give the impression of only scraping the surface – but the details you have here are enough that it feels like even if your answers for what’s under the surface aren’t Barker’s answers, you could still improvise something that feels broadly appropriate. This is a trick which Skyrealms of Jorune, offering a similarly rich world with a similar science fantasy background and similar quest-for-citizenship assumed campaign structure, never quite manages. Even if you never play Empire of the Petal Throne, it remains a historically significant title as far as the development of the hobby goes – in particular, I can see the influence of its particular organisational approach and its willingness to seamlessly blend setting information and rules on early RuneQuest. 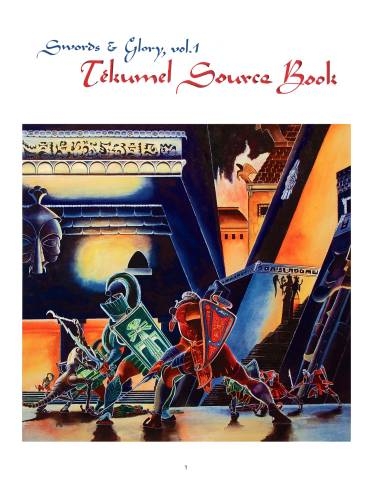 Swords & Glory was supposed to be the second Tekumel RPG, with Barker throwing his lot in with Gamescience to get it out there. It was planned as three lavish releases – a first boxed set released in 1983 containing the Tekumel Source Book and a set of maps, a second box released in 1984 containing the players’ materials for the new RPG system, and a third boxed set of the GM materials. Unfortunately, the third box was never published, leaving Swords & Glory unusable as an RPG, and new Tekumel games eventually came along to displace it.

However, the Tekumel Source Book remains of great interest to the Tekumel fandom because Barker and Gamescience were smart enough to make sure it was put out as a system-neutral book. Yes, the intent was that people would eventually use it with the rest of the Swords & Glory set, but the text openly acknowledges the possibility of using it with Empire of the Petal Throne instead.

The book comes to 136 extremely densely-packed pages of setting information about Tekumel, and is perhaps the most extensive and complete one-volume compilation of Tekumel information available. (A reprint by Different Worlds split it into two volumes with larger text.) It’s not all-encompassing, but there is so very much information here that it doesn’t need to be – there’s more or less no serious prospect of any campaign using all the material in here anyway. (I doubt even the Professor’s legendary decades-long home campaign made significant use of all the factoids in here.)

Barker, again, understands that this presents a daunting prospect – if anything, nearly a decade of feedback since the release of Empire of the Petal Throne seems to have only confirmed his expectations that Tekumel very much isn’t for everyone, not least because it’s a very non-standard fantasy world in terms of the tastes of Western audiences and because of the wealth of material offered. To his credit, Barker doesn’t water down Tekumel any here for the sake of making it easy – instead, he simply encourages users of the book to dip in and out to read up on topics of interest to them, which is sound advice considering given how amazingly information-dense the book is. For my part, I think Empire of the Petal Throne offers a reasonable level of detail to be getting on with, but I’m glad the Tekumel Source Book exists to offer deeper detail as and when it’s wanted.

5 thoughts on “Foundations of the Petal Throne”