As I’ve previously covered, part of Allen Varney’s agenda with Paranoia XP was to reclaim the game from the morass of lazy parody and cheap puns it had slid into under the custodianship of West End Games. Part of this process was to present three different playstyles in the core Paranoia XP rulebook – Zap, Classic, and Straight. Zap was the poor cousin of the edition, the old puns-and-pointless-violence style that Varney specifically wanted to discourage. Classic was the style Varney mostly wanted to aim it – the original approach which won over the gaming world back in the 1st edition and early 2nd edition days of the game. Straight was what you got if you turned the dials the other way – more purely based on satire as opposed to other forms of comedy, more subtlety and preparation required for flinging about accusations of treason, and a slightly more functional Alpha Complex that could conceivably form the basis for campaign play if that’s what you really want to do.

Of course, one of the best ways to delineate the difference between these play styles is in offering worked examples of each. The West End back catalogue had a decent number of high-quality Classic missions, hence the Flashbacks compilation – but though their latter-day missions were, I suppose, examples of Zap play, they were also kind of shit and not really worth reprinting, and examples of Straight were nonexistent.

Thus, Crash Priority and WMD, two of the earliest adventure supplements for Paranoia XP. Crash Priority was the first all-original mission collection offered by Mongoose, coming hot on the heels of the XP core rulebook; WMD came out a year later in 2005, making it the second all-original mission collection for the edition. WMD consisted of all-Straight missions (Classic fans got Flashbacks in 2005, which was more than enough to be getting on with for a good while), whilst Crash Priority in principle offered missions of all styles but went heavy on the Straight – three Straight missions, one Classic, and one Zap tucked in at the back. 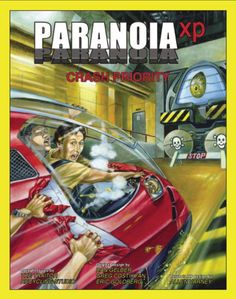 The first mission in the set is a Straight number, though one that could drift into Classic play very easily – Dan Curtis Johnson’s Stealth Train. This is a guard duty mission in the spirit of Me and My Shadow, Mark IV, with a mission embroiled in a deep thicket of betrayals and the player character Troubleshooters caught in the middle of it all. The central joke is clever enough that I have little desire to spoil it – suffice to say that Johnson shows a real knack for getting the most out of a simple premise, and constructing a scenario where the player characters are given overwhelmingly good reasons to lie – and then get tripped up later on by those lies.

Traitor Backup is another Straight mission, this time a collaboration between Beth Fischi and Allen Varney. It has the Troubleshooters handing out refreshing drinks to the queues of prisoners waiting to be executed at a Termination Centre. It’s as bleakly cynical and wickedly funny as the concept implies, and is surely the most pure statement of the Straight style that the book has to offer.

Paul Baldowski offers Patch Job, a good example of a non-railroady location-based Paranoia scenario (and another Straight offering that could bleed nicely into Classic). Ok, the location is a railway station, but the point is that the Troubleshooters are sent to do a job there, various complicating factors are present, and then Baldowski sits back to allow your players’ actions and the luck of the dice to determine what happens. This is an excellent design philosophy and it’s a shame it took this long for someone to apply it to Paranoia.

Our lone Classic offering here is Random Access Mission, which is by Andy Fitzpatrick, though to be honest you could probably happily play it Straight too – the borderline between Straight and Classic seems much more porous than Classic and Zap. This works best with experienced Paranoia players who know what to expect from the standard mission structure – because in this mission an error means that the structure of the mission is hopelessly scrambled, another example of a simple idea which fits the parameters of Alpha Complex perfectly and can spiral into a hilarious mess.

Finally there is the Zap mission by Jeff Groves, Nyuk Nyuk Nyuk, featuring the PCs as a Troubleshooters team who are literally just the Three Stooges. To be honest, it reads more like a slightly halfassed Classic mission with a bunch of puns and extremely forced wackiness sprinkled on it. It’s not much to write home about, but then again that’s in keeping with the agenda of making Zap the poor cousin of the other styles.

Crash Priority is rounded off with three sets (one Straight, one Classic, and one Zap) of pregenerated player characters, with prewritten service group and secret society missions, which can be slotted into any particular mission concept you wish – very handy for pick-up-and-play games. Given how easy it is to drift all the missions presented into a Classic style, it’s as useful for Straight-inclined groups as it is for the Classically-inclined, and I particularly like the way it established a format of providing self-contained missions for mission supplements rather than the “multiple linked missions” format of the West End days, since this allows much more openness and unpredictability when it comes to mission outcomes. On that level, it might be the best adventure supplement for Paranoia ever released. 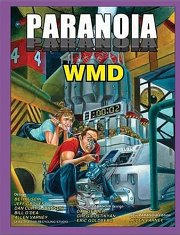 The first mission in this set is Hunger by Dan Curtis Johnson. Inspired by the Great Leap Forward of Maoist China, it has the Troubleshooters taking on increasing responsibility for implementing a pioneering new food vat technique which, as the mission title implies, utterly fails to work. As Johnson is careful to outline in the preliminary notes to the mission, it’s a highly non-standard Paranoia affair because rather than being based on having the characters’ plans all fail, Hunger is an exploration of the power of saying “yes” – with the player characters able to succeed and advance themselves in all sorts of ways, except when it comes to actually producing sufficient food for the sector to eat. It’s also, as promised, spectacularly dark – in this respect it’s about as Straight as the Straight playstyle could possibly get without ceasing to be a comedic game altogether.

Hot Potato, by Jeff Groves, involves the most conventional WMD in the collection. It puts this device in the players’ hands and ostensibly gives them the chance to decide what to do with it, except actually all the meaningful choices are either railroaded non-choices or actively meaningless; unlike Hunger, which thrives on player creativity, it instead plays lip service to that but actually assumes that the players will concur with Groves as designer as to what the best course of action is. (There’s explicitly no “toss it in the trash and hope nobody finds it” option.) The use of fiat and railroading is just a little too high for Straight, and it also isn’t really funny, in contrast to Hunger. In short, it reads like someone aiming for Straight but overshooting the target and hitting Drab.

Next up is Bill O’Dea’s Infohazard, another “computer virus makes stuff go wacky” episode with a very different spin from Random Access Mission. It suffers a little for not having any guidance on secret society missions – a major oversight – and also from building up a lot to an interesting and unusual climax which deserved much more space than the rather drab railroad that leads up to it.

The book concludes with Beth Fischi and Allen Varney’s WMD, a longer piece which falls sufficiently in love with trying to get as Philip K. Dick with the Paranoia setting as possible that it almost entirely forgets to be funny, or atmospheric, or really anything other than very invested in how clever it is.

To be fair, the mission was extensively hacked about to save space – cut material emerged on the “director’s cut” free PDF download which also included copies of all the handouts in the supplement, though to add insult to injury Mongoose didn’t bother to release the PDF until some four years had passed after the supplement’s release, rather than immediately after release like they said they would. Some things in life are reassuringly consistent, and I suppose after putting out solid material like the core Paranoia XP rulebook, Crash Priority and the original Flashbacks, Mongoose were over due for an egregious display of what I like to think of as “Mongoose Competence”. (This is, after all, the same Mongoose that goofed up and failed to notice that they’d reprinted the same mission in Flashbacks Redux and Flashbacks Redux Redux.)

Still, none of this really change the fact that by WMD I’d sort of sussed out the pattern all the missions in this book were going with – railroad the players a bunch or give them the illusion of choice for most of the adventure, then conclude by giving them a really awful choice to make at the conclusion. This is weirdly formulaic given that none of the Straight offerings in Crash Priority followed this model, and I can only assume that either it reflects an evolution in Varney’s thinking or Varney was steering the Straight missions in Crash Priority in a Classic-bordering direction to make the that supplement a bit more appealing for Classic fans.

Perhaps the overall feeling was that the Straight missions in Crash Priority weren’t Straight enough, and WMD was meant to be really, really Straight – but the upshot of that is that when humour is attempted (like the gangsters in Hunger it’s rather incongruous), and the formula applied to the missions here feels like it misses the potential of a Straight game to actually go for a genuinely less railroaded model of Paranoia.

If Crash Priority presented Straight as being mainly a less violence-intensive, more pun-averse take on Classic – a perfectly viable alternative in my book – WMD falls into the trap that Crash Priority didn’t – namely, applying Straight as a stark overcompensation in the opposite direction to Zap. Dropping the puns and parody is one thing, but WMD at several points comes close to simply dropping the satire altogether – and is otherwise drab enough that when the satire is noticeable, it’s incongruous. In short, whilst Varney’s particular vision for the Straight playstyle as expressed here is an interesting experiment, at the same time you can kind of see why it ended up fading away into the background as the XP line progressed.