Chaosium’s upcoming revision of RuneQuest will be the 4th edition of the game issued by its home company. Indeed, the copyright notice at the back of this set of quickstart rules (including an adventure) produced for Free RPG Day refers to this new version as the 4th Edition, though of course there they might simply want to avoid any implication of trying to claim copyright to text actually produced by Mongoose or Design Mechanism. 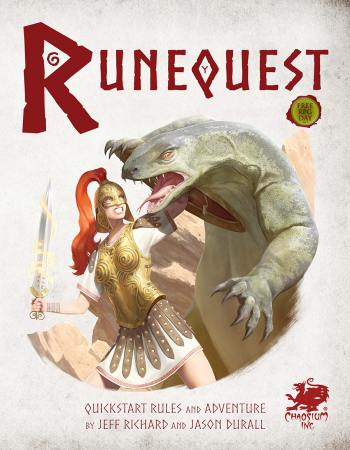 Still, some will no doubt see these quickstart rules as a decisive rejection of the direction that RuneQuest took for the two Mongoose editions and the version Design Mechanism produced. For my part, I tend to instead see it as a tacit acknowledgement that that particular fork of the system already has a very good expression in the form of Design Mechanism’s Mythras (which is what they relabelled their Runequest 6th Edition as). If there is going to be a point to Chaosium’s new RuneQuest, it needs to do something different from Mythras – and from all the other BRP-inspired fantasy systems out there.

That “something else”, it’s pretty obvious, is Glorantha. A renewed focus on Glorantha can only be expected. Following the ouster of the old Charlie Krank-headed regime during the long struggle to save the Call of Cthulhu 7th Edition Kickstarter from collapsing outright – an event which would have probably killed the company – Greg Stafford and Sandy Petersen brought in the guys from Moon Design Publications to become the new Chaosium management team. Moon Design have long been Greg’s partners in producing Glorantha material; as well as the Guide to Glorantha, the definitive statement of Gloranthan canon, they were also responsible for a series of reprints of old RuneQuest 2nd Edition material in the form of the Glorantha Classics compilations.

It’s been very clear through all those activities that Moon Design are serious fans of Glorantha, and so it’s no surprise that given the levers of power at Chaosium they have decided to go full Gloranthan for the new RuneQuest edition. But as those who’ve witnessed the major turnaround they have accomplished in Chaosium’s business practices and fortunes can attest, the Moon Design crew also have sound minds for business – it’s specifically that blend of love for the material and good commercial judgement that Greg Stafford cited as the reasons why they’re a good fit to run Chaosium.

The fact is that, thanks in part to Mongoose putting their version of RuneQuest out under an OGL, the new RuneQuest would have a huge task ahead of it if it tried to sell itself on system alone. Some RuneQuest variants have succeeded to one extent or another on that, of course – Mythras is quite well-regarded by those who like the additional intricacies it offers in combat. But Glorantha, precisely because it isn’t open content, represents something that Chaosium can offer that nobody else can – and as such making the new RuneQuest a specifically Gloranthan RPG (and even more specifically a BRP-flavoured alternative to the more artsy, storygamey HeroQuest) makes a ton of sense as a way to make it stand out from the pack.

It also fits into the new Chaosium’s overall strategy extremely well. Rick Meints and the rest of the Moon Design team have been pretty open about the fact that they believe that Chaosium’s major strength is in pairing robust game mechanics with strong settings. Only they know the exact sales figures comparing product lines against each other, but they’ve more or less directly indicated that products like Magic World or the Basic Roleplaying Big Yellow Book just didn’t sell in sufficient quantities to make it worth continued development on those lines. (They’ve shifting them to being legacy products available as PDF or, eventually, print-on-demand.) The lesson learned seems to be that except for a few particularly lucky and well-placed games, generic just doesn’t sell these days – the RPG market wants flavour, so by golly Chaosium is going to give the market what it wants.

So, what does this amount to in the new edition? It’s not possible to give a definitive answer just on the basis of these rather incomplete rules – in particular, whilst the quickstart gives you the rules for playing the pregen characters provided, you don’t have a fully-fledged character generation system here. Still, for the most part what is here will be very familiar to those who played RuneQuest 2nd Edition, perhaps with somewhat clearer organisation here and there. (RQ2 was extraordinarily well-explained for RPGs of its time, but by modern standards that’s not a high bar to clear.) Ideas from the Avalon Hill-backed 3rd Edition may creep in here and there – I suspect in such things as making culture central to character gen – but the overall level of rules-heaviness seems to favour the more rules-medium RQ2 over the rather bulky and cumbersome RQ3 – which is fair enough given that even the Chaosium crew who worked on that seem to acknowledge these days that a lot of the additional complexity in that edition was a mistake. (Again, if you want a rules-heavier take on RuneQuest, Mythras should serve you just fine.)

The major advancement here is bringing in the idea of passions and personality traits from Stafford’s Pendragon, which like in that context can be used to help get substantial bonuses to rolls – immediately offering a handy way for even beginning characters to punch above their weight when matters that are important to them are on the line. The real brainwave here is in basing the personality traits on the various Gloranthan runes – or rather, the in-character logic is that the runes underpin everything, and certain personality traits proceed from different runes, so the more you express them the better your attunement to that rune. This in turn gives rise to a nice revision of the rune magic system, in which your rune rating is used as your casting skill.

The passion stuff feels just as appropriate to the Bronze Age mythology feel of RuneQuest as it is to the Arthurian myth of Pendragon, whilst runes-as-personality traits immediately make characters feel marked by the Gloranthan cosmos, and provides a handy way in to grasping this crucial bit of Gloranthan lore. Between that and the rules hitting what feels for me like just the right level of heaviness and complexity, this sampler’s got me feeling very hopeful about the new edition of RuneQuest.